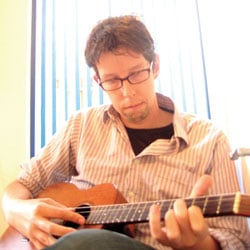 Years of listening to ex-Hefner lynchpin Darren Hayman’s music gives you a strong impression of how he might be in person.

As the Essex-born cult indie legend rushes into a central London pub on a dreary Monday night, unremarkably dressed with matted brown hair and complete with those trademark thick rimmed specs, it soon becomes obvious that he is all his records suggest.

Hayman is a charming but at times awkward interviewee. Endearingly geeky, looks over his shoulder constantly while we chat, avoiding prolonged eye contact throughout our time together but giving witty and extremely well considered responses to each question.While he nurses a cold pint we start by asking him how he’s feeling about the release of stunning new album Darren Hayman And The Secondary Modern. Despite this being his eighth studio work and second solo effort he actually seems genuinely nervous about people hearing it.

“When I look back at the albums I’ve made it looks like I don’t care what people think. I mean I broke Hefner up to make an electronic album,” he laughs. “And I used to pretend that I didn’t care but actually I really really do, and I’ve had to develop coping devices to deal with it. When I am recording and writing I forget about the people that are going to listen to it and try to make it as interesting as possible,” he adds, “and it’s only when I come to release it I start to worry.”

So if he had his time again would he do things differently? “No. At times I’ve made it hard for someone to like all my records by nature of them all being very different,” he says, becoming serious, “and when I look at my life and my career I would have liked to have sold more records… but then it resembles the kind of people I like and respect. I see them as brave so it’s quite nice to think I’m maybe a little bit like that.”

Recorded in just 12 days, and featuring contributions from friends he met around a Shoreditch studio underneath the Duke Of Uke shop and such esteemed musicians as reclusive ’70s songsmith and musicOMH favourite John Howard, avant brass man Terry Edwards, folktronica act Ellis Island Sound and members of Let’s Wrestle, The Wave Pictures and Fanfarlo, Hayman’s second solo offering is his most accessible recording in years. Reminiscent of the stripped down, scratchy guitars and infectious melodies of early Hefner, it will please both fans who have stuck with him through thick and thin and entice back those frightened off by his experimental tendencies.

However, as Hayman goes on to explain, he was shocked that people regarded him as an indie abandoner for daring to dabble with electronica towards the end of his previous outfit’s career. “I try out new things up to a point but ultimately the records all sound like me. So I was very surprised and a bit irritated when people got angry about me doing The French and I didn’t understand as I thought everyone liked indie and electronic music. That album and the Hefner one before which was a bit electronic really lost me loads of fans. I know it did because I know the figures but I don’t let it keep me awake at night. Ultimately The French album is one of my favourites. It’s really focused, and I actually think it’s one of my best records.”

“I have tried and I really can’t do anything else except this.”
– Darren Hayman, having tried a dog’s home and shop work…

Musical innovation has clearly come at a price for Hayman over the years. So how does he then feel when he sees less talented acts that play it safe selling their music by the bucket-load? “When I write songs and I’m really excited in the studio I sometimes think there is no reason why this couldn’t be a hit… but then I don’t like people who have hits. And I listen to obscure music all day, so it’s a bit unreasonable to want that. I probably do deserve a little more recognition than I get,” he adds mischievously. “I think more people would like me if they’d heard of me, but it’s just the way careers go.”

“I remember three years ago The Guardian finally getting round to doing an article on Half Man Half Biscuit and I thought God they really had to wait for that,” he chuckles. “Certain things sometimes get under your skin, like when a band that I think are quite similar to me get recognition, but I can’t really compare myself to Razorlight or anything.”

And thank heavens for that. With a third solo record on the subject of new towns just completed and a bluegrass side-project and concept album about astronauts on the way, it would seem that Hayman is as prolific as ever and still refreshingly unwilling to play it safe. He claims to no longer have expectations when it comes to his career, but reassures us that he plans to be making music for a long time yet.

“I just find it quite easy to write,” he says. “I have never had writer’s block, for example. For me, the ideas come quite easily, and I am very quick at recording, although I’m sure some people think I shouldn’t be when they listen to the albums,” he laughs. “I basically try not to think about goals anymore but I’ve realised over the years that I’m not clever enough to write books, I’ve worked at Battersea Dogs Home between albums, done a teacher training course, shop work and some lecturing at a further education college. But I had to stop all of them because I didn’t like them,” he explains. “I know it’s a clich and loads of people have said it, but trust me I have tried and I really can’t do anything else except this. I only really feel at home when I’m writing songs.”