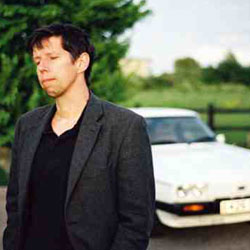 Darren Hayman is surely one of Britain’s most criminally underrated songwriters. For years he has consistently produced songs that have been lyrically deft, catchy of tune and wonderfully observational, both as a solo artist and as leader of 1990s favourites Hefner.

So far this year he’s completed his latest project, January Songs, which saw him write, record and video a song every day for a month (and auction off the original notebook for the Japan tsunami relief effort, raising 250). With this year also potentially bringing us the third part of his Essex-themed trilogy (following on from Pram Town and Essex Arms), and his production duties on the forthcoming The Wave Pictures album, it seemed like the perfect time to talk to one of the most prolific and diligent men in music.

musicOMH: How did the idea for January Songs come about, and what was the rationale behind it?

Darren Hayman: It was me giving up and throwing a tantrum really. I’m sitting on three or four albums waiting to be released now. The music industry is slow and sloth-like and nobody makes any money. I write songs quickly. All of these ideas came together in an idea where I work stupidly hard for very little reward.

OMH: Describe your songwriting processes during January Songs. Were you at any stage mentally constructing multiple days-worth of songs?

DH: I can only think of maybe two or three occasions when I got a little bit ahead of myself and had a chord sequence or a title for the next day. I would allow myself to have concepts ready for certain collaborators but in actuality the majority of the songs were started when I woke up in the morning.

The most interesting element of the songwriting was almost to have no second guessing or editing. I write quickly and often. I wrote two tunes today but I pride myself on being a good editor. I throw a lot out and rewrite lyrics constantly.

On January Songs the first thing I saw when I stepped outside of the house had to be the song and that constraint was very interesting to me.

OMH: How challenging was it to work with so many collaborators? Did the changeability add a sense of excitement and impetus to proceedings?

DH: Sometimes it was hard because I had to be a producer, manager, technician and sometimes explain to people how I work etc. The people who know how I work were easier, because they know I’m a stupid arsehole. I like recording people when they’re tuning up or scratching their bum. I’m not sure the guitarists in the Hillfields and Tigercats want to work with me again. Then again, some people I worked with were total strangers on the internet and that worked beautifully.

Everybody made it better though. It would have been useless and boring with me on my own.

OMH: Did you at any point have ideas for songs that you decided to mentally ring-fence for another project? Did ideas from other projects start to creep into January Songs?

DH: There just wasn’t time to react that quickly to what was going on. It’s only now that some of the better songs are revealing themselves to me. The only ‘cheat’ was the chorus to Who Hung The Monkey it was in my head and I sang it in front of Dave T (Tettersall, lead singer of The Wave Pictures) and he liked it so I saved it for him. Although the rest of the song was written that day.

OMH: Do you find it galling that The Flaming Lips (and as a result The Wedding Present) are getting so much exposure for doing a song a month considering the workload and timescale relative to January Songs?

DH: I think I’m not alone in thinking The Flaming Lips a little slack in the execution of their idea. I was going to write a song towards the end of January called Lazy Wayne Coyne which had him crying with frustration in a room full of moth eaten furry suits and dirty confetti. He would be looking at a blank piece of paper and wondering when an idea would ever occur to him.

The Wedding Present things was different because they were actual singles, that were charting etc. I bought every one of those singles. I thought the Hit Parade was great.

I get jealous sometimes but I’ve just had bad luck in my career and remain relatively unsuccessful. The advantage to being unsuccessful is that you can do stupid ideas like this.

OMH: You’ve intoned that any physical release of January Songs will be ‘super-deluxe’. What details can you give us about it so far.

DH: No I’ve changed my mind, I need to make an announcement. We were going to do a deluxe CD/DVD bound book but then I realised it negated the point of the project, which was to be instant, online and an experiment. It would have put me six months behind again. It’s going to stay on the internet. If a record company wants to come and put it together and release it they can, but I’m not working on it.

OMH: How advanced are preparations for the third part of your Essex trilogy? Having covered life in both urban and rural settings where do you intend to explore for the next instalment?

DH: The third part of the Essex Trilogy is going to be called The Violence and is about the Witch Trials in the mid seventeenth century to the north of Essex. It may or may not be the next release though, I have another album called The Ship’s Piano finished. The Violence is 90% finished. It has lots of woodwind on it.

OMH: Would you say that your more recent solo work focuses on locations and environments, whereas with Hefner the focus was more on people and situations?

DH: Hmm not sure. I would hope that I’m always writing about people but I am definitely quite focussed on location, and now time, as framing devices. I’m still singing about the same stuff though. Even the Witch Trials album will have songs about feeling out of place, which is what nearly all of my songs are about really. The way none of us feel as though we quite fit.

OMH: Considering the amount of time you’ve spent with The Wave Pictures, was it as easy to produce Beer In The Breakers as it might appear on paper? Or, despite the working relationship that you and them have had did it still represent a challenge?

DH: They asked several times and I said no. I was very wary of recording friends and I was also wary of getting involved in any record company nonsense. Much like January Songs we tried hard to keep all the industry stuff outside the room. It’s very nice that they’ve put ‘produced by’ on the record sleeve but Dave knows exactly what he wants and nobody really produces him. I just pointed the microphones at the instruments and turned the volume down when the needles went in the red.

It’s a good way of recording and more bands should do it.

OMH: Between January Songs, production duties, and a forthcoming Hefner reissue as well as possibly the final part of your Essex trilogy, 2011 must rank as one of your busiest periods in recent times. What have been the highlights for you so far, and what are you looking forward to most over the rest of the year?

DH: Dave Sheppard, the drummer in the Secondary Modern and also a writer and musician in his own right, has asked me to make an album with him during the summer. It is the first time I can think of that somebody has asked me to do something as a musician and I’m enormously flattered. It will be a proper co-write project and I can’t wait to start on it.

More about Darren Hayman’s January Songs can be found at januarysongs.tumblr.com.