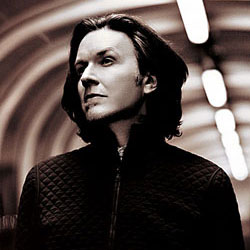 David Sylvian, born in the year of the Dog, is now 20 years away from his most famous image – the bleach and the make-up – and is writing on a laptop from his bedroom.

It’s an old meditation room in a converted Ashram on the side of a mountain somewhere in New England, USA. It’s his last week there. His 13-year marriage has ended and he is moving on, basing himself in New York and London.

It seems he’s spent a lifetime on the move. But then again, its unimaginable to imagine him having found a home in his place of origin; South London’s Catford, a place better suited to the likes of Del Boy than David Sylvian.

The new album is called Slow Borne Sorrow and its glacial and expansively detailed soundscapes – as detailed as a snowflake and just as pure – seem a literal lifetime away from his glam soul boy origins.

“I was never at ‘home’ in my hometown,” says David. “Maybe that’s part of why I experienced the world as a hostile place, although much of it was due to my own psychology. Sure, the location was virtually devoid of any redeeming features but it was the village-like mentality of the suburbs that was suffocating.”

Sylvian’s first and still most famous band, Japan, started young. Signed to Hansa Records via Pop manager legend Simon Napier Bell, the average age of the group was 17 when they began touring and recording. It was these means, this gang that allowed Sylvian to escape the utterly unsympathetic environment he was born into.

“There was quite a lot of fear to overcome before I could walk out into the world at large with the spirit of adventure.”
– David Sylvian

“I guess I started travelling when I was about 18. I can’t say I had an overriding ambition to travel before that time. I thought of the external world as a hostile place. There was quite a lot of fear to overcome before I could walk out into the world at large with the spirit of adventure.”

At the end of 1982, purpose accomplished, the group disbanded when Sylvian was only 23, providing a bedrock for what has increasingly seemed his main mission in life: the solo artist who makes anything but solo albums.

The recurring thread running throughout Sylvian’s discography has been that of collaboration and his latest project – a band project, going by the name of Nine Horses – is no different in this regard.

“Snow Bourne Sorrow had a long, protracted evolution. The songs themselves come quickly but the recording of the pieces takes time to reach fruition. Steve (Jansen) also has a tendency to work slowly so whilst a song may have come together in what seemed like minutes there’s time taken over the construction, arrangement of the piece, the sound design, etc etc.

“One of us would come up with something that would get the ball rolling and we’d take it from there. Take the cyclic keyboard melody for Atom and Cell. Steve initially came up with a very different percussion part in response. I wrote the lyric while he was programming the drums… there it was in essence… a few hours work. Then comes the refining. Months later Steve scrapped the percussion pattern and replaced it with something more refined, added the vibes. I added the chorus vocals, Arve (Henriksen), Ryuichi Sakamoto…

“This is essentially how we’ve always worked together. A refining of ideas and sound over time but essentially the song is there from stage one.”

“Works tend to come fully formed. There isn’t too much tampering once I’ve found the heart of a piece.”
– David Sylvian

Steve is a sublimely lyrical drummer with a musical voice as unique as that of his brothers. “I think of Steve as an architect. He builds these wonderfully thought through structures on which the composition rests. He is thorough, reliable. Like me he’s not what I would call an improviser, but that’s not where his interest or focus has led him up until now. I would love to hear him improvise more often. Steve is also an amazing programmer and sound designer.”

Sylvian has various selling points but melody was never particularly one of them. I asked him if this was intentional? I couldn’t imagine him, a la Burt Bacharach, slaving over scores and sheet music refining that top line into the early hours…

“I am suspicious of melody and tend to go with melodies that (hopefully) seep into the consciousness with repeated listening. Too much is made of melody in popular music which tends to diminish my ability to sustain interest in much that is produced in that genre. Works tend to come fully formed. There isn’t too much tampering once I’ve found the heart of a piece.”

While a long time fan of cinema – Sylvian is at present enamoured of the new wave of Thai Directors – at a time when seemingly every band is featuring in some indie flick or other, Sylvian’s vast back catalogue is conspicious in its absence. He does however, still occasionally receive offers to score movies “…but I didn’t feel like pursuing them. I enjoy working under my own steam. Not too tolerant of people peering over my shoulder as I work. I’ve worked with a few musicians over the years that have produced numerous scores. I have enormous respect for their abilities but I have an aversion to this craftsman-like approach to music making. Maybe if the right director with the right film came along..? But I’ve been saying that for years now…”

Aside from a movie how do you relax outside of work? As a teetotal vegetarian, what are your indulgences? “I’m obsessed with books. As I’ve been doing a bit of travelling I’ve been making my way through Paul Auster’s output and that of his very talented wife Siri Hustvedt. Great on the road reading. Adam Philips Going Sane. Edie Prvost Minute Particulars…

“I’m not too good at small talk but love to get straight to what’s real.”
– David Sylvian

“Collecting art was something I did when younger. Ownership is far less important to me now. I like to dress well, but actually don’t indulge myself that often. I tend to live in the most comfortable of clothing from morning to night when at home. Comfort is essential when working.”

There’s another concurrent thread running through Sylvian’s work – its lack of casualness. Non-believers could criticise his music from many angles, but one couldn’t call it trivial; not in any respect. This then, may be the key to his personality and to his works. This then, may be the crux: “I’m not too good at small talk but love to get straight to what’s real.”