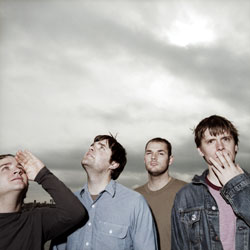 Death Cab for Cutie are in the middle of the most important year of their careers to date.

Having switched from an independent label to Atlantic, appeared on the smash teen drama The OC and sold out a huge US tour, their fifth album, Plans, marks the culmination of a slow rise to acclaim.

musicOMH caught up with frontman Ben Gibbard and bassist Nick Harmer to talk about the new LP, getting famous and the future…
The four members of Seattle band, Death Cab for Cutie are sprawled about their West London hotel room. Outside, the oppressive grey skies are as well suited to their home city as they are to summer in England. I am the last in a long afternoon of interviews, and despite their obvious fatigue and the weather I find the Ben and Nick eager to talk about their new album, Plans.

They describe the record as “textually very different” to their back catalogue which it certainly is. “Musical depth” and “introspection” are the watchwords for Death Cab’s fifth studio album, their first on Atlantic records. The album has gained far more exposure than ever before owing to the band’s first footsteps into the mainstream. The album was streamed onto the band’s own website and has been circulating as an illegal download. I was eager to find out how Death Cab felt about the technological revolution in music.

“It’s been absolutely necessary for us” enthuses Nick, given the fact that until recently they have been on an independent label with little marketing budget, the band seem genuinely pleased to interact with their fans and share their music online.

But this is all a bit different now given their major label status and growing popularity has seen Plans set up on plenty of download sites. “It’s unavoidable” they say in tandem, they seem particularly unfazed by it in fact – perhaps because they sense that so many people really enjoy the record. They remark on its power and how great artists such as Fiona Apple have had records released because of the ground-swell of internet interest. So internet sharing is appreciated by Death Cab, but where do they see the future of music? Nick suggests telepathic sharing. Well maybe…

“Kids having their first kiss to a Death Cab song is kind of bizarre to me.”
– Ben Gibbard of Death Cab For Cutie getting to grips with The OC fanbase.

But there is no escaping the fact that the band is becoming more famous, Ben admits to being recognised by ‘jocks’ increasingly and that he hopes the new record will speak to everyone from housewives in Kansas to hipsters in San Francisco. However, The OC generation would surely be DCFC’s biggest fans. Ben is “very flattered” and a little uneasy about becoming the soundtrack to teenagers’ lives: “I write music about my life and those around me…to think about kids having their first kiss to a Death Cab song is kind of bizarre to me”.

Death Cab have always written emotionally powerful songs though. Perhaps none more so than What Sarah Said from the new album, which is about losing a loved one, the central lyric being “Love is watching someone die”. Ben is quick to point out that the relationship involved is not necessarily a romantic one, and that the songs’ meaning is widely identifiable. Surprisingly What Sarah Said was a late addition to the record, “that really tied the record together”. Ben’s favourites from the album are Different Names For The Same Thing and I Will Follow You Into The Dark both of which feature the juxtaposition of the quietly simple and very densely textured music. They are unsure about how these will turn out live however, as more equipment than ever before was used in the recordings. UK listeners will have the chance to find out for themselves at the beginning of next year, the band promise.

Whilst we’re on future promises, Ben anticipates that there will be another album by his side-project, The Postal Service, although he has no idea when. And when quizzed about what he wants to do with Death Cab doing in the future, he replies “absolutely everything” and that the band’s “focus and communication has never been clearer” and that they are “a tighter unit than ever before”.

So we can be sure of plenty more to come from a band that, five albums in, are still excited about making Death Cab For Cutie records. This is something we should all be thankful for. Death Cab have been a well kept secret for far too long.