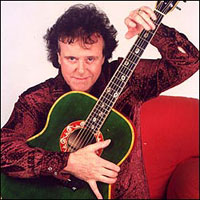 In the ’60s Donovan Leitch headed up the psychedelic movement, with his poetic folk rivalling his American counterpart, Bob Dylan.

He hung out with The Beatles and Led Zeppelin, and it can’t have damaged his status as an icon to be the first pop star busted for pot possession.

musicOMH chatted to Donovan on his nationwide tour to promote his new album Beat Cafe, and discovers that he has quite a few other bits and bobs to plug as well…
Well if ever the term ‘corporate hippy’ was invented for anyone, it should be for Donovan. The ’60s folk singer and icon, the man who introduced the mainstream world to bohemia and who eschewed the vices of the commercial world, has become somewhat more mellow to the idea of selling your wares. With a new compilation album out, Beat Cafe, which he is currently promoting with a nationwide tour, and a new book on its way called The Hurdy Gurdy man, the Sunshine Superman certainly has a lot of plugging to do.

While this is all the real world and every act these days has to in some way be part of the musical rat race, that Donovan is quite happily part of this world is rather disappointing. Why can’t we have embalmed him as he was in the ’60s: corduroy cap on tousled mop, determined young lips pressed firm, and with a head full of songs for his muse Linda Lawrence? Instead I’m speaking to an affable mellifluous voice down the phone that has thinned with age and speaks a language akin to that of a top salesman. Ah well, I suppose he’s not talking to me for shits ‘n’ giggles.

His tour is going well, he explains in his softly-spoken and lilting Scottish tones. “We’re creating on stage a beat cafe and we’re having such fun. My daughter Astrella Celeste is opening for me. She’s also a singer, my British daughter, and we’ve got a beautiful show. It’s acoustic for the first half and then a break and then I bring on a band and so there will be lots of hits and and it will feature songs from my new album, also called Beat Cafe.”

“You get immediately taken out of bohemia by the entertainment world. How it affected me you’re going to have to read in the book!”
– Is the hard sell part of the bohemian lifestyle Donovan?

The name of this album harks back to his beatnik days, and in some ways Donovan is still firmly planted there – he still has that wispy idealism, and back in the sixties his reputation was monolithic. Now however he hasn’t got the strength of song to protest about anything much now. In fact, he is as much known for being father-in-law to Shaun Ryder, (his other daughter Oriole is married to the former Happy Mondays frontman), as being a militant folk star who hung out with Led Zeppelin and The Beatles.

He wooshes back momentarily to the Donovan of old when I ask him what he feels the milestones have been in his career that spans exactly four decades this year. I could almost imagine the glaze in his eye as he harks back to the heady days of his youth. “Milestones, there are so many extraordinary ones. Most people say ‘hit records’, ’10 million dollars’ or something like that, well my milestones are very different. The most amazing achievement I felt I had brought to popular culture was introducing bohemia ideas – not singlehandedly but with my contemporaries – introducing civil rights, anti-war songs, appreciation of the spiritual path, meditation, literature, and essentally a poetic lyric to the pop charts. “

Indeed, the enlightened self-pronounced Celt and Pagan was integral to the ’60s’ psychedelic movement. A rival to Dylan, his association with Micky Most, renowned as Britain’s answer to Phil Spector, afforded him his folk poet yet ‘far out’ sound. He also made history by being the first ever pop star to get busted for marijuana possession. Those were the days eh.

The rose-tinted glasses are removed however when he shows his hard-sell side again when I make a point about bohemians. Putting to him that if bohemians are notoriously dreamy and distracted, how did becoming famous affect his mindset and work? He replies: “You get immediately taken out of bohemia by the entertainment world. How it affected me you’re going to have to read in the book!”. His true colours are certainly not Mellow Yellow now I’d wager. Though he does relent slightly and says: “I’ll give you a hint, Gypsy Dave and I hitched away at 16 and we gained freedom, in a way fame tried to ensare us and then we’d lost a bit of freedom, but then we’d gained it again, so it’s a story of loss and gain. But it’s also a love story, of Linda and I, my muse, my sunshine supergirl.”

“The most amazing achievement I felt I had brought to popular culture was introducing bohemia ideas”
– Donovan reflects on his iconic status during the psychedelic 60s.

Ah yes the lovely Linda, the ex-girlfriend of Brian Jones and Donovan’s wife. So how much of his material was actually based around her? Was she Jennifer Juniper, Guinevere and Lalena for example? “Well she’s sunshine supergirl in (Sunshine) Superman, she’s Catch The Wind she’s Legend Of A Girl Child Linda, she’s in many songs, she’s in Where Is She, she’s in many different guises. Guinevere…she may be Guinevere too. She’s not Jennifer Juniper though, Jenny was Patti Boyd’s sister, I had a crush on Jenny so she got a song.”

Keeping on this romantic tack, I try to steer him back to the ideals of bohemians, I ask him how much pressure he was under to keep writing music in those days by the big cheeses in the music industry. He mishears the question, replacing music with ‘his book’! So it’s back to The Hurdy Gurdy Man again – either he’s a little deaf or he’s determined to plug his great tome to death – after all, he does mention twice that it’s being published by Random House. “It’s been going for a long while, it began as hand-written notes in the 1970s set out to capture names, experiences and even conversations of the very bohemia we were talking about, things that happened in ’63 and ’64 before I forgot them.

“Then over the years I started adding to the book, wondering what I was building. And what I was building was this movement that came out of bohemia and Britain and into pop culture. It was so important I feel. So I’ve been doing this book for quite a long while! It’s almost complete, I’ve got it in my bag, I’m doing the last corrections. Gypsy Dave my road buddy has been helping too. In Greece last year we spent quite a lot of time working on it. So I’m very excited coming back to do the 40th with new material and with the book and with all the records coming out.”

Yes, did I forget to mention that? Four of his albums from 1965 to 1970 are reissued on EMI – Hurdy-Gurdy Man, Sunshine Superman, Mellow Yellow and Barabajagal are out now on EMI. His constant plugging, which also includes his website, www.donovan.ie, has a certain risible charm: if he escaped to Hertfordshire in 1969 to avoid ‘superfame’, he sure as hell is keen to step back into the limelight. Good luck to him.