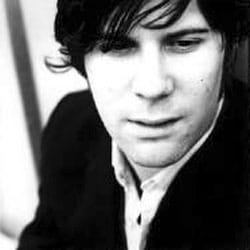 Ed Harcourt is currently on tour promoting his successful third album Strangers, and of course musicOMH couldn’t let the opportunity pass to sit this multi-talented man down for an interview.

So, on a drizzly afternoon I enter the Zodiac in Oxford where he’s sound-checking for his evening gig.

Also on stage is his fiance and violinist Gita, for whom Harcourt wrote the love songs on the current album, including This One’s For You.
What a lovely man he is. But wait, let’s not all go ‘ahhhh’ just yet…

For a songwriter who sings from his heart, you’d think getting hitched would inspire a flurry of romantic ditties, much like the ones on current album Strangers. This isn’t quite the case for Ed Harcourt however, who is currently crafting two albums worth of songs. Yes, one of the albums will effuse the old poetic magic that this fiercely passionate songsmith does best. But the second appears to be the other’s seething underbelly, a nightmarish vision of darkly corrosive songs full of the portent of doom. Has our young troubadour, who sings of great love and old music boxes, gone ever so slightly off his head?

“I wanted to do something about man’s descent into madness kind of thing, called Poisoned Mind” rasps Harcourt, who in the Oxford Zodiac’s cold dressing room cups a steaming glass of herbal tea for his asthma (“not very rock ‘n’ roll is it,” he smiles). “It’s about, you know, how the world is so…fucking doomed. Sort of an apocalyptic album but I want it to be quite cartoony in a way.”

So despite romantically proposing to his true love, muse and violinist Gita on an island off Naples, and buying her a ring from London’s posh Burlington Arcade no less, it’s clear the 27-year-old also thrives on a bit of the dark side, especially in humour. “Sometimes people don’t get my humour on stage, if I call the audience I go ‘okay you fuckers, here’s the next song’, I’m not going: ‘you are stupid fuckers‘, you know. It’s like, you’ve gotta understand the humour is very light-hearted and it’s important, however black or dark it might be”.

“I wanted to do something about man’s descent into madness kind of thing”
– Ed Harcourt shudders off the love song mantle.

When he cites Little Britain and League of Gentlemen, I should have picked up on Harcourt’s impish Puck-like mind. Though listening back on my mini-disc it’s clear much of his ‘dark’ humour completely passed me by. Among the colourful array of subjects we cover, from first shags to hating football, we also lampoon the laughable austerity of the Germans and I recount a horrid time with an insultingly honest German boyfriend. “Do you think it’s something to do with the Nazis” he darts at me with furrowed brow. I cringe as I hear myself stammer that I didn’t know, rather than conspiratorially reply with some witty riposte.

I’m also stupidly flummoxed when he announces he doesn’t feel he’s truly made it until someone sets up an anti-Harcourt site. “It could be ironic” he says in a faux American twang, his fingers curling into that annoying quotation mark gesture.

I console myself that, as this is a man of many talents, he is also in the art of subtlety. In fact, those of you who pleasantly hum along to his current single Born In The Seventies with a misty-eyed fondness may be surprised to know the song’s actual subject: older musicians criticising their younger counterparts’ efforts with the claim that it’s all been done before.

“I just find it really patronising”
– Ed Harcourt on older musicians telling their younger counterparts that it’s all been done before.

“I just find it really patronising”, says Harcourt, twisting open a bottle of water. “It’s quite a cheeky song really, a playful dig. It’s quite cynical in a way I suppose, it’s more like I’m trying to warn myself from turning into a lot of those people. I suppose it’s every generation’s prerogative to, you know, not be fixated on the past but try and create something new and vital.”

Harcourt is of course again speaking his mind – something he does solidly for 25 minutes, despite needing to preserving his tender throat during sound-check. Full of spirit and opinion, he never quite allows me to complete my sentences for he has to say what he has to say at that precise second. And despite his poor health he chatters with excitement when explaining how the piano on Storm Is Coming and Let Love Not Weigh Me Down off Strangers, which he recorded at Atlantis Studios in Sweden, was the same one ABBA used on Dancing Queen.

At the same time he is disarmingly calm, beaming a smile when I gush how wonderful Gita must feel to know that his last single This One’s For You is written for her. He also brims with anecdotes, sitting back with arms folded, reeling off stories about the time, for example, he called a bouncer a “fucking cunt” in front of an audience because the brute burped loudly during the end of a quiet song.

“Who’s to say that every performer should be a good actor? Why can’t you just be yourself?”
– Ed Harcourt: what you see is what you get.

“I just react to things like that. I’m not a good actor,” he frowns. “Who’s to say that every performer should be a good actor? Why can’t you just be yourself? If it’s a knee-jerk reaction than so be it, doesn’t mean you have to, like, do a stiff upper lip and ignore it, you know, I don’t see why I should. I don’t think anyone else would.”

And that, I reply, is exactly why he endears himself to so many people, because we know what he’s thinking, we listen to his personal lyrics, we read the online diary on his website.

“I respond to people and I always give a totally straight-forward response” he seconds. “If I see someone who’s being totally unjustified, I just fucking lay into them. I’m putting myself up there, singing these stupid little songs. They’re anonymous, you know, so they can hide behind something, but I can’t.”

A brisk knock on the door signals end of interview. Ed Harcourt has to continue sound-checking and bids me farewell. With a hop and a skip he’s on his feet and bounds out the door. Behind one of his keyboards on stage he’s back to being Ed Harcourt the performer. Walking past the band with the music behind me it seems almost impossible that such a passionate melody merchant would create an album of doom, or call anyone a “fucking cunt” for that matter. Whatever they say about Harcourt the artist, Harcourt the man is a lot more than just a loved-up romantic. Now, who’s going to help me set up www.we-hate-ed.com?