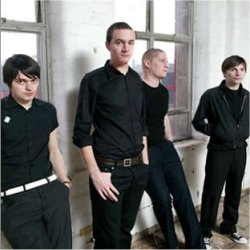 Birmingham based gloom rockers Editors have been one of the most talked about bands of 2005. They’ve been favourably compared to Interpol, Joy Division and Elbow, and back in July, put out their much-lauded debut LP The Back Room – a record that gatecrashed the top 20 in its first week of release.

“We met as mates a good five years ago when we first started university. We kind of cottoned on to each other pretty quickly and all ended up living together,” explains Chris, when asked about the band’s history.

He continues, citing a number of reasons – disillusionment with the music scene and a common adoration for two particular albums – as galvanising factors in the formation of Editors as we know them today.

“I’d fallen out love with guitar music for quite a while, kind of after Britpop as they was really nothing that was really interesting me, and we all connected one year when we came back after the summer on the first Strokes record and the first Elbow record. So we bonded on those two records and listened to them constantly. We all played different instruments and we were all into similar music, so we thought lets have a go and see what happens! We were doing music technology and had access to studios and practice rooms, so it just made sense.”

The band signed to Kitchenware records, an independent label based in Newcastle, in 2004. Unlike many other bands du jour, however, this was hardly an instantaneous process – Chris informs me that they were plugging away for a good while doing record company showcases before they secured a contract.

“We were obviously doing our day jobs, and then we went down to do a showcase for a major record label – we were doing that three to four times a week for a very long time,” he recalls.

He adds: “This was autumn 2003, and that followed into half way into 2004. The phrase that they kept using was ‘We really like it, but it needs to develop – it’s not ready’ And when you’re working in a shoe shop constantly and all you’re doing is music and all you’re thinking about is that, it starts to get incredibly annoying! At the end of the day we ended up signing with Kitchenware, and we couldn’t be happier with where we are at the moment.”

As far as musical influences are concerned, Chris is quick to sideline the role played by the commonly cited duo of Interpol and Joy Division (“The album was already written before we really listened to any of those bands properly”), and tells me that there are a number of other groups that have played a far more important part in the construction of the Editors sound.

“The Strokes are a very important band for us, we like to take that kind of brash rock’n’roll pop sensibility and merge it with the dynamics and literacy of Elbow. There’s a band called The Walkmen who kind of came on the scene and I fell in love with their record – we were listening to that a lot of the time. A lot of people say we sound like Interpol, but in all fairness, if it wasn’t for that Walkmen record, we wouldn’t sound like we do now,” he emphasises.

“We always state the main things are love, life and death”
– Chris on the band’s dark lyrical content…

On first listen, the record’s lyrical content appears dark and almost biblical, with sullen statements like “Blood runs through your veins, that’s where our similarity ends” (Blood), “People are fragile things” (Munich) and “All sparks will burn out in the end” (All Sparks) characterising the album. Although not totally disagreeing with this analysis, Chris is keen to point out that it’s not all doom and gloom as is often perceived.

“We always state the main things are love, life and death and Tom (Smith, the band’s frontman) likes to wrap them in an optimistic kind of vibe. Everyone says the album’s really dark, but the people that really get the album are the people who can kind of see the fact it’s really uplifting and can be quite positive at times,” he counters.

Positive lyrics or not, the reception to the album has certainly been as warm as the band could have hoped for. Hitting the shelves this summer, it was met with rave reviews from all and sundry, and ensured a string of sold out shows and packed tents at festivals across the country. Is Chris at all surprised by the success of the record?

“The album, definitely. We were trying to slow build, and I think that’s kind of what we did for the first three singles. And then the album dropped, and it dropped in the same time in Europe as well, and it just went absolutely off the chart! So we weren’t really expecting the album to do so well, but we were obviously hoping for it to step up another level – but it’s kind of stepped up a couple now.”

“That whole Monday-Friday thing where you get the weekends off just doesn’t happen anymore!”
– Chris on the price of increasing fame…

And have there been any particular high points of their year in the limelight?

“T In The Park was something that was really amazing, and there was one night at Glastonbury where I had a little too much fun at! There was King Tuts (In Glasgow), which was just an amazing feeling when the crowd wouldn’t let us play the next song because they were too busy clapping – we just had to start the song while they were still clapping because it was just getting silly,” Chris fondly reminisces.

However, the constant touring has come at a price – Chris tells me that being in a successful band isn’t something without its fair share of trappings.

“I had a bit of a moment in a garage today where I had to check the newspapers to realise what day it was. That whole Monday-Friday thing where you get the weekends off just doesn’t happen anymore!” he regrets.

The interview concludes with talk of the future. After such a good year for the band, where next? What does the future hold?

“The big ambition is just to get the second album written and make sure it’s really good and not shit,” (I’m informed that they’ve recently acquired a bigger tour bus to enable them to write on the road), “and hopefully get a week off!”