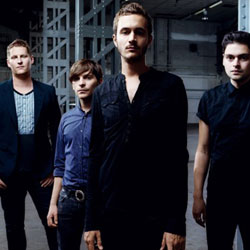 “There are few bands that split opinion as much as we do,” Editors’ frontman Tom Smith proudly declares.

He’s not far wrong. When their debut album The Back Room was released back in 2005, critics couldn’t get enough of them. Its lead singles, Bullets, Blood and Munich, etched them a place in noughties pop history, and their two subsequent albums were gobbled up by an ever-expanding band of followers, both reaching Number 1. But the music press was no longer on board.

“Do you know, it doesn’t bother me,” says a defiant Smith. “Not at all. We’ve never been a band that aims to please – we write records for ourselves. And it’s not like that everywhere. We’re much bigger in mainland Europe – Belgium, Holland, Germany. The press isn’t bothered about fashion over there. Cool’s not a concept and the audience is less fad-led. That’s the way it should be – it gives you more room to breathe.”

Smith and co took a deep breath with their latest album, In This Light And On This Evening, which was released at the tail end of 2009. Producer Flood – famous for his work with the likes of Depeche Mode, The Jesus and Mary Chain and U2 – slapped synthesizers all over it, giving their usual, straight up gloomy guitar sound an overhaul that provoked a mixed reaction from fans.

“That’s exactly what we wanted,” reckons Smith. “It was such a shift, I knew it’d put some noses out of joint – some would like it but some wouldn’t. But I’m not writing to prove anything to anyone. Some thought it was brave, some thought it was stupid, but we just didn’t want to have a one sound Editors. I was scared of having a one sound Editors. I wanted to do things a different way, and I’ll probably want to do things differently by the time the new record comes around.”

A new record? “Yeah, we’re going to work with Flood again. We’re going to be back in the studio with him later this year, after the festivals, when I’ve written some more songs. It’s around the festivals that I really get a lot of writing done. You work at the weekends and you’ve got the week, at home, to write.”

Taking a break from rehearsals for the band’s upcoming tour, Smith is keenly aware of the impact the album’s sound will have on their live show. “This is where it all starts happening. We’ve had two days in rehearsals, just going over the songs, but now we’re in production rehearsals, getting all the exciting stuff together – all the lights and things – all the ideas are coming to life. It’s going to have a real industrial, theatrical feel to it. There’s going to be more to it than we’ve had before.”

How so? “We’ve made a record that, on first listen, is dramatically different, so the show will be a visual interpretation of that. There are a lot of sci-fi references in the record, so I think that will come across too.” Does he care to elaborate on what fans can expect? “Errr… we’ll be playing a couple of songs we don’t usually play. And we’ve got a big backdrop!”

The band has spent a lot of time together of late. A couple of weeks ago Smith arrived back from a three week trip to the USA, and in January they spent 10 days in Australia. The miles they clock up on tour or promotional duties are the only time Smith and guitarist Chris Urbanowicz, bassist Russell Leech and drummer Ed Lay get to see each other nowadays, as Smith lives in London with his partner, DJ Edith Bowman, and their young son Rudy, while Leech and Urbanowicz have taken up residence in New York and Lay has remained in Birmingham.

“I’m not all misery. I can be surprising sometimes!”
– Editors’ Tom Smith

Does this make writing new material tricky? “Not at all,” he counters. “We do it the way the writing with this band has always worked. I come up with some ideas, record some demos – rough ideas, on guitar or piano, basic chordal information – and I send it off to the others. We don’t go into the studio instantly, we wait until we’ve got at least 10 strong song ideas, so I sort of drip feed them, then we talk about them on e-mail and then we’ll go into the studio and make them into Editors songs. It really works no different to when we were all in the same house. In fact, it probably works better now, because when we do get together we’re more focussed than we’ve ever been. And living different lives means we can bring different experiences to the band – we’re being stimulated by different people and places.”

Being settled in such a solitary writing process, has Smith ever been tempted to bypass the e-mail conversations and go it alone? “Absolutely. I’d be very surprised if I don’t do something by myself at some point. It’d all depend on what the rest of the band were doing, but yeah – I’d like to.” What would solo Smith be like? “I’m nowhere near that stage yet!” he laughs. One thing’s for sure – it’s bound to be of a bleak persuasion. His latest lyrics paint a sinister picture, from his certainty of a godless world in Papillon (“If there really was a God here, he’d have shown his hand by now / Now darling you’re born, get old, then die here”) to In This Light And On This Evening’s most brutal, darkest moment, Eat Raw Meat = Blood Drool (“I don’t want to be left out or get fucked / but there’s a talent in your lies / if you’re chewing with an open mouth, raw meat / your blood drool that attracts the flies”).

Smith is known for lashing out against those who dwell on the ‘dark’ nature of the band. “The only thing that annoys me as if people dismiss us for being dark, or ask me why we’re so dark. We might be darker than your average indie band but people think it’s forced. For me, Lady GaGa‘s music makes me want to kill myself. The music we make makes me happy, and I don’t think our audience leaves our shows feeling sad – I think it leaves them feeling uplifted. A lot of people feel that kind of connection.”

This dark undercurrent doesn’t necessarily tally with the music he listens to either – he lists the the new Gorillaz album Plastic Beach, Gill Scott-Heron‘s I’m New Here and Scratch My Back by Peter Gabriel as records currently propping up his playlist. They’re not artists he’d necessarily be associated with. “Well,” he says, playfully, “I’m not all misery. I can be surprising sometimes!”

Editors’ album In This Light And On This Evening is out now through Columbia. The band are touring the UK during March, including two nights at London’s Brixton Academy on 24th and 25th, before heading off round Europe. Full tour dates can be found at their MySpace.