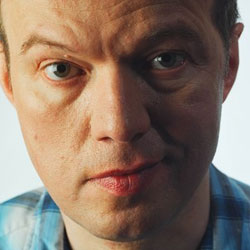 Edwyn Collins’ new album Losing Sleep is his seventh solo effort and follows his career as the lynchpin of Orange Juice.

Featuring tracks co-written with Johnny Marr, Roddy Frame, Alex Kapranos and Nick McCarthy of Franz Ferdinand, Romeo Stodart of The Magic Numbers, Ryan Jarman of The Cribs, and The Drums, it’s the first album Edwyn’s written and recorded since his two life-threatening cerebral haemorrhages in 2005.

His comeback gig at the BBC Electric Proms in 2007 bore testimony to his resolve not to be beaten, and the following year underlined it, marking as it did the beginning of his new album’s studio gestation. With Losing Sleep now out, and the Orange Juice seven-disc box set Coals To Newcastle following in short order, it seemed an opportune time to catch up with Edwyn for a natter about things past and present.

musicOMH: The process of recovery from your illness must have been a huge challenge. Was returning to music the ultimate goal that drove you forward? Would recovery have been made even more difficult without that creative impulse?
Edwyn Collins: Immensely so. Maybe impossible? If I couldn’t make it back to music, I couldn’t have made it at all. I know this now, I need it in my life, for meaning.

OMH: Do you and (wife) Grace (Maxwell) continue to view your public performances as the realisation of a dream given your illness, or have your perceptions changed?
EC: No, that feeling goes on. I feel it keenly, how lucky I am. I don’t take it for granted, not at all.

OMH: Given the circumstances in which it was written and recorded, do you see Losing Sleep as your biggest achievement to date or would you prefer it to be seen simply as another stage in your musical career?
EC: No, it’s my biggest achievement, definitely. I really did it? Oh, I’m proud of myself.

OMH: Considering how fiercely independent you’ve been throughout most of your career to date, was it a challenge to work closely with other musicians on Losing Sleep and did it require a change in mindset?
EC: You’re right, that’s how I was. But no, it was easy, so easy. All the musicians are wonderful, everyone. We had a really good time. And they let me be the boss.

OMH: Seeing as Losing Sleep and Orange Juice’s Coals To Newcastle boxset are being released little more than six weeks apart, would you say you’re in the strange position of having two different aspects of your career vying for public attention?
EC: Maybe, but maybe it just gives a bit of context. My INTERESTING life.

OMH: Both with Orange Juice and as a solo artist you are closely associated with unexpectedly big hit singles (Rip It Up and A Girl Like You respectively). Do you ever want to escape these songs and do you ever feel that it detracts from appreciation of your whole catalogue? Or are they the songs of which you are most proud?
EC: I love them both, I’m not embarrassed by hits, that would be crazy. Maybe there could have been more, but c’est la vie. I accept the whole story as it is. It’s my story, there it is.

OMH: Given how yourself and Alan Horne are considered as the catalysts for the Scottish music scene 30 years ago, do you look at what it’s become now with a sense of pride in either a personal or national sense?
EC: Yes a sense of pride, for us. Definitely not a national pride. I’m not into narrow nationalism, I’m an Internationalist.

OMH: A recent album review described you as ‘fey’ (Orange Juice-era) and a ‘smoothie’ (Setanta-era, around A Girl Like You). Would you agree with such categorisation, and if so how would you describe yourself in this stage of your career?
EC: Good grief. Actually, I’m the same today as back then, both times. Hard as nails. I believe in me, quietly. That’s how to keep going. Be tough inside.

OMH: Obviously Orange Juice was influential in post-punk, but the band managed to keep well below the radar. How do you feel about bands like The Smiths (and specifically Morrissey‘s vocal style and kind of campy sad-sack approach) who’ve cribbed their sound to greater commercial success?
EC: If I harped on about that today, with all the good stuff in my life, aged 52, what a sad sack I would be, eh? One thing about me now is different. I allow everybody to do their thing. Good luck. I’m mellow and understanding.

OMH: Orange Juice was part of a major shift in underground music aesthetics. Were you conscious of this at the time? And, how does it feel now that Domino’s involvement in reissuing their catalogue has inspired interest from a new generation of potential fans?
EC: I was very aware of everything I was trying to do. It was more than music, it was striving for a uniqueness, but with really good music. It was a tall order, I knew that, but I had to give it a go. I obviously like it when new generations get what I was aiming for. It’s satisfying.

OMH: Any sub-genre that’s labelled as post- anything is essentially reacting to something else. What, specifically, was Orange Juice reacting to in punk music, and do you feel that today’s emulators of the punk-meets-funk-meets-dance sound are doing it right?
EC: Reacting against ? Ugliness. Misery. Doom. Cliches. New Romantic posers. Closed shop music business. On and on and on we went, telling everyone they were wrong and we were right. But we were FUNNY.

OMH: Do you feel that music is a vessel for reactionary messages, and is its power the same today as it was in the early ’80s?
EC: I don’t know, I’m quite old, I can’t be inside young people’s heads, that would be terribly wrong. If they like my new record I say, thank you. But tell youngsters where they are going wrong? That’s disgusting, I wouldn’t do it.

OMH: And finally, a personal question (from Andrew): I’m consistently drawn to the ET figurine in a shop window in the Rip It Up video. How do you feel about ET, and was it a conscious choice to include him in the video, pseudo-space-themed as it is?
EC: Andrew, there is quite long story about ET… he comes back again on the Texas Fever cover but with a different head. My flatmate used to do some ET performance art in our living room when he was drunk. I’ll explainit to you properly one day…!

OMH: Many thanks for your time, Edwyn.
EC: Ta Ta!

Edwyn Collins’ album Losing Sleep is out now through Heavenly. The Orange Juice box set Coals To Newcastle is released through Domino on 8th November 2010. Questions were posed by Andrew Burgess, Michael Hubbard and Gareth Ware and the answers were transcribed by Grace Maxwell.