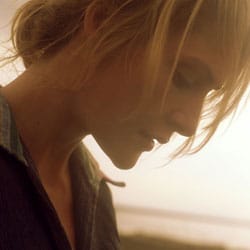 Sometime member of sprawling Canadian indie collective Broken Social Scene and figurehead face of Metric, Emily Haines now veers into new territory with the release of her first solo album, Knives Don’t Have Your Back. We caught up with her for a chat about the record, tortured artists, Prozac parties, collaborations and the future of her band…

“Emily’s just stepped off a flight from Vancouver. She had some transportation problems at Heathrow, and she’s not feeling very well.” After this disclaimer, a tortuous interview was in prospect. Which interesting opener could grasp the attention of the enigmatic songstress? Would she be cranky and uncommunicative? Should I start with the fact that we both grew up in Etobicoke? Or maybe we could count the degrees of separation between us as a result of my freakishly coincidental connection with Canadian quintet The Lovely Feathers? Perhaps she’d be interested in my paralysing fear of imposing North American drug stores?

None of these conversational detours were necessary. Emily began philosophising enthusiastically the moment we were seated, no prompting required.

Hot off the heels of Live It Out, Metric’s critically acclaimed sophomore album, Emily gathered a few of her favourite people, a collective affectionately dubbed The Soft Skeleton, and began recording her solo album. Knives Don’t Have Your Back is a collection of hypnotic piano-driven ballads, which contrasts starkly with the energy-laden sound typically associated with Metric. Does Emily expect this record to appeal to a different demographic?

“Actually, most Metric songs I write would start out sounding the same way that Knives sounds. The only difference is that with Knives, I’m exposing my music in a more vulnerable state. When I did the North American tour, I was curious as to whether the audience would be different, but I saw the same kids going to my solo gigs. I think that sometimes the ability of listeners to adjust their preferences to suit their moods is underestimated.”

Although Emily is, and always has been, a prolific songwriter, the driving force behind her decision to release a solo album stemmed from personal tragedy.

“The whole point of Metric was to create music that appeals to the masses and that gets on the radio…”
– Emily Haines, pop princess

“I always wrote, but I was pretty shy about it. The day after we finished recording Old World Underground, Where Are You Now? (Metric’s official debut), my father died. I don’t want to sound really morbid about it, but this was really the impetus behind Knives. He was a writer, and my whole creative identity was wrapped up in a conversation we were having. When he died, I realised that it was now or never. He was a very reclusive writer and was never published in his entire life, so his death really made me realise that I needed to get my songs out there.”

Emily’s father’s legacy is definitely present in the album, as tracks such as Reading In Bed and Mostly Waving were written shortly after his death. However, was his influence more pervasive? Did his writings inspire Emily as a lyricist?

“My father paid so much attention to language, and I definitely possess that trait as well. But he’s a very different writer to me. I suppose that’s partly because my work is recognised on such a different platform. In my family, success is having no one know who you are, so I’m definitely considered the ‘pop princess’ in my family.”

The mention of anonymity reminded me of an interview in which Emily stated that as a musician, she preferred to be heard and not seen. Has Metric’s mainstream success changed her mind? Also, has her creative process been hindered by the fact that she can no longer remain a disembodied voice?

“It’s weird, because it seems like times have changed. Now there’s this surveillance culture, and things like camera phones are essentially spy technologies. But I’ve adapted to it. I like music writers and I feel we have a lot in common. But if I had the option, I would still rather be a sound rather than a picture. If I wanted to be seen, I would’ve chosen to be a model. But on the bright side, it’s a very creative time right now, and mainstream success hasn’t changed that. The whole point of Metric was to create music that appeals to the masses and that gets on the radio, but just because something is popular in principle doesn’t mean that it has to be cheap or crappy, right?”

Agreed. However, despite Emily’s prioritisation of music over visuals, there is no denying that the music video for her debut single Dr Blind is a mesmerising affair. What inspired the eerie video, which stars Emily as a meandering patron of a depressing North American hypermart?

“The track was sonically inspired by the movie Rosemary’s Baby, so when I thought about the video I had a cinematic theme in mind. I told Jaron Albertin (the director) that I wanted to capture that feeling of coming off your meds at a late night pharmacy, and that I also wanted to do stuff using foley the way you would in films, so you’ll hear people walking around and other things happening around the song. I’m really happy with how it turned out.”

What about the track itself? Does this concept of blindness resonate strongly with Emily, given that she plays some of her gigs blindfolded?

“The song is partly addressing this new phenomenon of pharmaceutical companies marketing directly to consumers. In North America, they make a pill, throw in the standard ‘Ask your doctor’ line and never tell you what it’s for. And then you get these adverts with women standing on hilltops looking refreshed. It blinds consumers to the truth and entices them to want it. I really wanted to bring out the fact that this sense of malaise and this fascist approach to the human spirit should not be tolerated at this juncture. It bothers me that no one has the patience to deal with someone who is just sad. I felt that setting the video in a drug store would allude to the fact that everyone is just partying on Prozac.”

While typecasting Knives Don’t Have Your Back as ‘depressing’ would be doing it a grave injustice, the album is nevertheless one of the most introspective and probing bodies of work produced in recent memory. This emotional rawness is less obvious in the material which Metric fans may be more familiar with. How does Emily maintain that duality as a performer? Do pain and suffering lend art greater urgency?

“Knives is definitely different from my Metric material, but I would have to qualify that by saying that the more emotive aspects are not completely missing from Metric. With Metric, we just refuse to tolerate that kind of negative energy by turning it into something else. It’s like our version of Peaches’ Fuck The Pain Away. I do agree that some of the best music stems from pain, but I just don’t like the idea of wallowing in it. People have enough trouble getting their spirits up, and I don’t see the function of music that gets you down. Knives is more of an acknowledgement that if you stay out late, there will be some consequences you’ll have to deal with in the morning, and I’ve provided a record for people to listen to during those times of reflection.”

Although the solo album provided Emily with an alternative avenue to explore her musical interests, I questioned whether this sufficed. After all, not only is Emily a ‘fluctuating member’ of critical darlings Broken Social Scene, she has also assumed guest vocal duties on tracks by other Canadian band such as Stars and The Stills. How did these working relationships materialise? Also, what did she make of Broken Social Scene’s ‘unconventional business model’?

“I just like to be a part of things I guess. I recently did a track with Les Savy Fav just because they asked me to. It’s different with Broken Social Scene though since that’s more of a serious writing relationship. I left Canada for a long time, but whenever Jimmy (Metric’s lead guitarist) and I came back we would do a little work with them. It’s like Broken Social Scene was an affair that resulted in a baby. I think it would be cool if more people realised that you don’t have to step on other people to get where you want. With the whole group of people involved in Broken Social Scene, whenever any one of us got any exposure, the first thing we’d do is send a shout out to our friends. I think that if you’re really good, you should be able to acknowledge that other people are kicking ass instead of pretending that you’re the only one capable of picking up an instrument, you know?”

Speaking of other artists, Emily once commented that as a band, she would like Metric to find its place somewhere in between Sonic Youth and The Rolling Stones. As a solo artist, where would she place herself on the musical spectrum? Also, who would she like to collaborate with?

“I think somewhere in between Elliott Smith and Robert Wyatt would be a good place to be. As far as collaborations go, I’d like to do something with Neil Young someday. Hopefully he’ll read this…”

While Emily intends to produce more solo material in future, she emphatically confirms that Metric remains her number one priority.

“I think when I make another solo album, I would definitely go further with the soundtrack and ambience aspect of it by incorporating more of a Brian Eno influence. But Metric is definitely the engine behind my musical identity. We’re working on the next album, and it’s going to be a much more collaborative effort in terms of songwriting. We’ve only had two writing sessions so far so we’re still working on the theme.”

Where does she see herself in five years’ time? “I keep forgetting I’m supposed to set goals. Hopefully I’ll be spending more time in the studio and less time touring. But having said that, I find the lifestyle completely addictive. I guess I’d just like to keep doing what I’m doing… and not fuck up.”

After those wise parting words, Emily hops into a taxi to get some much needed rest, but not before giving me a warm, gracious farewell. With her musical Midas touch and commanding presence, Emily Haines is poised to become music’s next iconic frontwoman, for whom ‘fucking up’ should be of no concern.