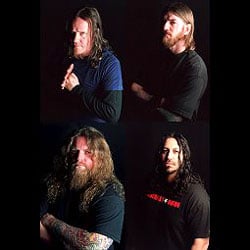 Having surfaced well before nu-metal was a twinkling in a journalist’s eye; traversed the angst-ridden movement with superior strength; and subsequently resurfaced on the other side of the new millennium, Fear Factory are nothing if not resilient.

However, despite being pioneers of the “cyber-metal” sound, where blast beats and futuristic keyboards sit alongside thrash metal, Fear Factory have had a fairly tumultuous career.
They endured harsh criticism from both the media and fans after 2001’s Digimortal album, and split up for a time. With the band resurrecting for last year’s Archetype album, musicOMH caught up with drummer extraordinaire Raymond Herrera to discuss Fear Factory’s indelible influence.

It is a seasoned veteran who sits opposite me on a dilapidated sofa in the London Astoria’s shabby dressing room. Raymond Herrera begins by sharing how fortunate he is to be doing what he’s doing:

“I was just so lucky to find people so quickly who shared the same passion and visions for music as me. I jammed with a couple of people before, but it never worked out. With Fear Factory, it was different straight away, it worked from the beginning.”

The “beginning” was 1990, two years before Fear Factory’s seminal Soul Of A New Machine album, recorded with guitarist Dino Cazares, vocalist Burton C Bell and bassist Andrew Shives (who would later be replaced by Christian Olde Wolbers). Other influential releases followed – including Fear Is The Mindkiller, Demanufacture and its remix twin Remanufacture, and Obsolete, which featured a chart-hitting version of Gary Numan‘s Cars – but by the time Digimortal was released in 2001, relationships were a little fraught in the Fear Factory camp.

“My musical approach to drumming is totally different from anyone else’s.” – Fear Factory drummer Raymond Herrera is not shy about his own talent.

Cazares left in less than amicable circumstances, and vocalist Bell called it a day soon after. Herrera and Olde Wolbers were set to walk away too, until they read the small-print on their record contracts:

“We discovered that we had to come up with new material, because we were signedas individuals, not just as the band. That was trying, but me and Christian got together – he’s playedguitar for ages anyway – and we dropped three songs.”

The condensed version of the rest of a very tangled story is that amidst remix albums being releasedwithout the band members’ knowledge, Herrera and reborn guitarist Olde Wolbers kept writing, found a new record label in the US, got Burton C Bell back on board, and then addressed the issue of a bassplayer in one easy step:

“With Byron it was a case of us having known him for ages. We offered it to him and he took it. It certainly wasn’t a case of auditions or anything like that.”

“We were refreshing, a breath of fresh air to the scene.” – Fear Factory drummer Raymond Herrera is not shy about his band’s talent either!

As anyone who’s heard even the briefest snippet of Fear Factory will know, the central revolutionaryforce behind the band’s composition has always been the nimble limbwork of Herrera, a fact whichthe drummer is far from shy about!

“Well yeah, my musical approach to drumming is totally different from anyone else’s, certainly within this genre, but beyond that as well – almost in a jazz sense you know? The melody and timing in my approach is pretty unique.”

It turns out that Herrera is not backwards in coming forwards about the band’s contribution to music either:

“It’s nice to know you made a difference. When we started out, it was with movie and voicesamples, then we stated developing our own and later added more keyboards for moods and atmosphere.”

“We were refreshing, a breath of fresh air to the scene, and you need that. Before Rage Against The Machine and then Korn came along doing rap metal, before that there was only that Anthrax and Public Enemy track (laughsreminiscently about Bring The Noise). That was the same with us – we had obvious influences like Ministry, but no-one was doing what we were at the time.”

“What, Fear Factory? The real story behind that is that we wanted a name that sounded “Metal!” but industrial too.” – Raymond Herrera denies that his band’s name has anything to do with politics.

Despite Fear Factory’s success, Herrera realises that his group hasn’t always struck gold withtheir fans, but he claims to have learnt a lot from the experience:

“Despite some fans wanting you to change, most don’t. Albums like Obsolete and Digimortal got reallybad press and not such a good reaction from a lot of fans. Although some of them loved the less popularalbums, Demanufacture and Archetype are what we do best – it’s where we’re most comfortable and as for the future, it’s a case of more of the same I think!”

As my time draws to a close, I decide to probe a little deeper, suggesting that the band’s name seems almost prophetic given the mentality of the public in the current world climate:

“What, Fear Factory? The real story behind that is that we wanted a name that sounded “Metal!” but industrial too, so my flatmate came up with Factory for the industrial side and Fear for the metal part!”

Hmmm, perhaps not as philosophical an answer as one would have hoped for, but then some would argue that asking a drummer about socio-political climates is akin to handing Jade Goody an algebraicequation. Oh well, at least he can do more with a drum kit than most!