Fever Ray: “It is interesting what we find scary and what we find is beautiful. It’s very close, sometimes” – Interview 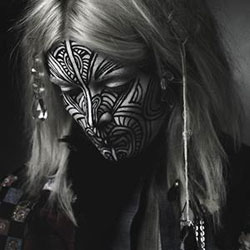 The Knife‘s landmark 2006 electro goth album Silent Shout established the fiercely independent Swedish sibling duo of Karin Dreijer Andersson and Olof Dreijer as electro auteurs, cut from a different and much darker cloth than their contemporaries.

Now Karin has made a solo album under the guise of Fever Ray and, like its immediate predecessor, it’s an eerie, creepy and lonely listen, full of curious twists. “It was a bit scary at first because I hadn’t been working on my own for so many years,” says Karin of her new arrangements. “When I got used to it I had a small studio set up south of Stockholm. It was really interesting to go into my own ideas without compromising.”

Olof now lives in Berlin. “I tried to send him some takes, but he’s been very into his own things,” she says, sipping at her coffee. “I started to write when I’d been home for six months with my second child. I think when you have kids you’re very isolated. You are awake at night, and you’re awake in the day too. It’s a very strange, zombie-like time. I think there are elements of that in the music.”

The eponymous album’s lead single If I Had A Heart calls ghost trains to mind, while Keep The Streets Empty is enough to make sure the listener has locked and bolted all windows and doors; it’s easy to believe there be zombies hereabouts. Through it all is that unique, alien voice, pitch treated sometimes, layered often. “I think (the music) is a lot of different mental characters,” she says. “You go into a mood or emotion and you want to follow it fully with the voice and it gets more effective to use the voice as an instrument.”

The album’s tempo is noticably slower than that of Silent Shout. “Since I am not clubbing I can’t play dance beats,” she reasons. “I don’t know how they sound. So this is the beats I know.” Karin’s process for composition, written in black and white, looks startlingly straightforward given the evocative tracks that make up Fever Ray. “Starting with the music, setting the environment and the tempo and the arrangement, then I start to experiment with vocals. Then the lyrics come much later,” she explains.

Now she’s got the writing and recording done, she’s been considering how best to render this music in a live setting. “When you do a live show something else has to happen, something visual,” she says. The Knife’s long-time visuals collaborator Andreas Nilsson was again on hand to make the video for If I Had A Heart. But unlike for the Silent Shout tour, this time there will be a band on stage. “I don’t think we’ll use screens this time,” she says. “There will still be programmed things, even if you can do a lot of live effects. There will be a more classical latino percussionist. But it will be mostly electronic devices.”

For years The Knife opted not to play live. As Fever Ray is she over that part of her life? “It’s very hard to know what connects best with the audience, especially now when it will sound different from the album,” she says. But she’s confident the material will translate. “I like Concrete Walls; it’s very nice to sing. It has a lot of voice transformers and many layers of voice which is really fun.” She doesn’t always pitch-bend her vocals; Keep The Streets Empty is her own singing voice, although she still treats her natural sound. “Always EQ,” she says. “Not gender fixed.”

“It is interesting what we find scary and what we find is beautiful. It’s very close, sometimes.” – Karin Dreijer Andersson

One audience she has in situ is her immediate family. “My eldest (child) is more into rock’n’roll,” she smiles. “She wants Kiss. And U2. She will be six this year. We tried Guitar Hero with her, and Singstar, but they have such awful songs. I will try to find some good karaoke songs. Kiss’s I Was Made For Loving You is the best we have at the moment.” So is her daughter disappointed that Fever Ray sounds nothing at all like Kiss? “She thinks I look a bit like Kiss. That’s her best compliment.”

Despite the solo nature of Fever Ray, the collaboration that is The Knife has not gone away for good. In September 2009 Karin and Olof will premier a new opera in Copenhagen. “We are working together; I am more responsible for the text/lyrics part,” she says. “It will be about Darwin’s process of writing On The Origin Of Species, the way he collected all ideas and samples and then put it into this book. It’s not finished – we’re still trying to find the way to write it. We have never been to an opera, so it’s very interesting.” There are tentative tour plans for the piece.

From working alone on Fever Ray, suddenly she’ll be part of a team working to a common goal. “We just do the music and then a cinematographer does the visuals and there’s a choreographer working with six dancers and three singers and a lighting designer. Everybody’s working completely on their own for a very long time but then, a few months before the premiere, we’ll put everything together.”

As for The Knife, the signs are they will return. Eventually. “I’m looking forward to doing another Knife album as well, but this year I will do Fever Ray. To me they’re very different things; I can’t compare. When we did The Knife we moved around a lot; we didn’t have any base. That took a lot of time setting up and taking down. Finally (for Fever Ray) I found a little place. But I think for the next project I will move again.”

Last time we met, Karin was bigging up Shellac. What’s she been listening to lately? “I listen a lot to Tomahawk, Mike Patton’s band. It’s Indian-inspired metal music, with quite a slow tempo, which I try to find for this album. I still listen to a lot of music for reference points. Like Alphaville! You can find elements of that in my music, that theatrical element.” So, to get Fever Ray, listen to Big In Japan? “I think that would be a good idea,” she smiles. “And Tomahawk.” Listen to the latter’s War Song and it’s immediately clear where she’s coming from.

Film influences are never far away where Karin is concerend. She cites Jim Jarmusch’s 1995 movie Dead Man as “the big influence” for the If I Had A Heart video. “It was the first thing I approached Andreas Nilsson with. And Julio Meden’s The Red Squirrel. It contains a scene with a band playing some obscure Spanish music, dressed in fur. It’s very beautiful.”

But for all her love of the moving image, and the visual imagery her music evokes, it’s always the music that matters most to Karin. “Music has the potential and possibility to create emotion, so you should take that possibility and use it as much as possible. It is interesting what we find scary and what we find is beautiful. It’s very close, sometimes.”

Fever Ray’s eponymous debut album is out now through Rabid. Tour dates and further information can be found here.