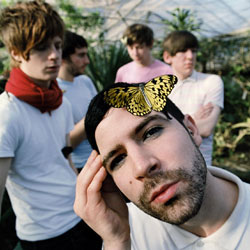 Foals are a recklessly bright bunch of Oxford University dropouts who currently have the entire music industry frothing at the mouth with their unique mix of academically leftfield guitars and rapturous indie dance.

Currently at a start of a nationwide tour, they have been involved in playing to sell out crowds, possibly staying awake past 11pm and erm, the odd show in a student kitchen.
“Last night we did a house party in Cambridge,” says front man Yannis Philippakis. “That was really fun. That’s how we started off. So it was good to do that again. They all got evicted today. Five neighbours complained. It was absolute carnage. Even the light fittings were ripped out. We played about three songs that were all out of tune but it was great’.

Five days in and there have also been some unexpected accidents.

“Our guitarist cracked his tooth. He’s literally taken a third out of it. The night before I cut my eye open and had blood running down my face. Walter’s got two black eyes. Jack ripped the toe in his foot the week before. So we’re like the walking dead at the moment.”

Not to mention some interesting encounters with a certain radio broadcaster, whom some readers might be fairly familiar with.

“Yeah, I vomited in front of Zane Lowe,” blushes Yannis. “We’d been DJing with him the night before and the next day I had to get him to stop the car. I had a stream of sick out of my nostrils with him just watching me. It was so embarrassing.”

Still, it isn’t just their alarming ability to mimic scenes from a Curb Your Enthusiasm script that sets Foals apart. Once (weirdly) dismissed as mere Klaxons copyists, they differ from their so called peers for simply being able to simultaneously sound like a scenster’s comfort blanket and still have the lust for experimentation normally preserved for acid fried hermits.

Their recent choice of producer for their forthcoming album says it all: maverick New Yorker Dave Sitek.

“The first thing he said on the phone was, ‘if you want to make a commercial record, don’t use me’.”

And once in the hands of the New York maverick, did things develop into studio bound lunacy?

“Yeah, pretty much. We’d spend six hours on one song. We recorded drums in an alley in Brooklyn. We manipulated every sound through analog and digital pedals.”

So probably slightly different from, say, The Feeling‘s recordings then?

“That’s how you should make a record. It shouldn’t be some square arse thing where a band whinge about a high hat sound. It is about the process and that’s what Sitek instilled into us, that it isn’t about the end product but the actual process and making sure you have fun with it. You’re not making a record to get from A to B or climb the social ladder, you are making it for what it is.”

What the end result sounds like is a tightly guarded secret, but Yannis is certain that it was worthwhile.

“We didn’t know what it would sound like. It sounds different. The brass makes is sound different. It takes it out of the white boy indie, Hoxton, winkle picker, tight jean thing. It makes it less time bound.”

Not only that but it led to some unlikely collaborations.

“If we tour the States we’ll probably take the three guys who played on the record, members of an afro beat band we worked with called Antibalas. They are fucking amazing. Serious musicians. We’ll also have a sampler.”

Such wild creative turns are becoming commonplace to Foals, like their recent work with cult electronica wizzkid and musicOMH podcast interviewee Kieran Hebden (aka Four Tet).

“Yeah. That sounds great,” enthuses Yannis. “That was so fun. Four Tet just let it happen. We were like remixing ourselves live with instruments and then he was conducting it. That’s how it sounds. Just three bass notes from the original and the rest was totally original. It allowed this band to mature basically. We come from a punk background and now we are just thinking about a lot more things.”

Remarkably the band have only been together for less than a year and a half. In the time it took most, wide eyed hopefuls to decide which way to part their fringe, Foals have made the equivalent of a metamorphasis. Have they had a chance to take stock of it all?

“We actually feel like we are doing something more fulfilling now. So now when we are stuck in a hotel room at 3am, we don’t think , ”oh what no, what are we doing. Why am I here playing the same songs every night”. Now we actually have a goal.”

“To fucking destroy the music industry from the inside out. Just kill every other band.”

It is hefty task but in a time when most bands equate ambition to selling a record in Tescos, they might just do it.