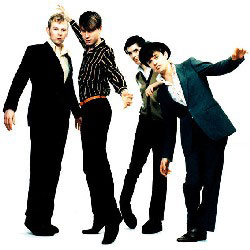 Franz Ferdinand were undoubtedly the success story of 2004. The Glasgow quartet have shifted well over a million copies of their debut album worldwide since its release in February of that year – a record that earned them the illustrious Mercury Music Prize.

That’s not to mention a string of sold out tours in Britain and the States and a series of triumphant festival performances – at Glastonbury and T in The Park to name but two.

The band are currently taking time off the road to record album number two in Scotland – aside from one night only at London’s Royal Albert Hall to play a charity gig in aid of the Teenage Cancer Trust.

musicOMH took the opportunity to catch up with guitarist Nick McCarthy and drummer Paul Thomson to reflect on the year gone by, the new album and plans for the future…

In September, Franz Ferdinand picked up the coveted Mercury award ahead ofother bands like The Streets, Keane, The Zutons and Snow Patrol. Perhaps this wasn’t the greatest surprise, considering the huge commercial and critical success the band were enjoying at the time. But they insist otherwise.

“Quite folky at the moment.”
– Franz Ferdinand on the follow-up to their all conquering eponymous debut…

“We were pretty shocked on the night,” says Paul. “We were ready to leave our seats and then it was us who had to get up!” Nick adds. “I didn’t really care, but when we actually won it was quite a good feeling, and we got to meet Brain Eno as well – that was pretty good,” he continues.

This sort of understated response is prominent throughout the rest of the conversation. It seems that the massive success and fame that has greeted them is secondary to their main goal of making great music for girls to dance to. Indeed, they’re equally modest about the big impact they’ve made in America.

“We like playing wherever we play – I think it’s the same in America. We just went over and played and just had fun and people liked it. I guess we’ve got some songs that people like as well. It’s as easy as that I think!” Nick exclaims, trying to sum up their success over there.

“It’s not like we went over and demanded people pay attention to us, we justgot on with what we do,” Paul continues. ‘What they do’ has earned them half a million album sales in the US to date, three well received tours and a nomination for the Shortlist prize (the American equivalent of the Mercury). Not bad for a bunch of guys with a few songs that people like.

One of these songs of which they speak was the massive hit Take Me Out, which almost single handedly propelled them to stardom. It was one of those songs that was literally everywhere last year, and became the band’s signature tune. It also won them countless awards at ceremonies around the globe – it seemed there was rarely a week where the band weren’t picking upawards like ‘Best Breakthrough Video’ or ‘Best Rock Group’. Do these prizeshold any value to them?

“No, not really,” laughs Nick. “It’s some sort of recognition I guess, but it’s not why we started playing music,” Paul adds. “It’s actually quite exciting to go up and stand in front of all the people and say something but otherwise, who cares?” Nick continues.

“It’s some sort of recognition I guess, but it’s not why we started playing music.”
– Franz Ferdinand on awards…

It must be said that all this success has certainly not come cheaply. The band toured constantly for about a year a half in order to establish themselves. 2004 saw trips to the States, France, Australia, and Italy amongst many other far flung lands. However, rather than becoming disillusioned about playing the same set of songs day in day out, they assure me they loved every minute of it.

“It is good because it’s always different, every concert you play – that’s what makes it really great. Otherwise you’d be sick and tired of it after aweek. But because it’s a different audience, a different place, it’s exciting, it’s really cool. You just have to play for the audience, and they’ll excite you!” Nick informs. And if you’ve ever seen them live, you’ll know that they are real performers who do put on one hell of a show.

Their second album is due out some time this year. “It’s going really well, we’re doing it in the Scottish countryside somewhere,” Nick reveals.

“We’d like to have in out in August – that’s the earliest it’ll probably come out. If we had our way, it would come out earlier, as soon as it was finished. But the record company promote it and it’s their money,” Paul explains, with an air of resentment towards their contractual obligations.

As for a possible title, they’re less forthcoming. “Franz Ferdinand’s second album, whatever you like!” Paul jokes. And how’s the whole thing sounding? “Quite folky at the moment,” reveals Nick. “Pastoral” Paul adds, galvanising laughter between the two.

After pushing them a bit more, I manage to get a more insightful response. “The scope’s a bit broader, I guess,” says Paul after some thought. They’re clearly playing their cards close to their chest, which is perhaps understandable considering they’re talking about one of the most eagerly anticipated records of the year.

This means it’s unlikely that we’ll see Franz live for a while – their next scheduled appearance is at the V Festival in August this year, which will see them co-headline the main stage along with the New York’s Scissor Sisters. It’s their first ever headline slot at a major festival, which comes after just one album.

“It’s a bit cheeky isn’t it,” Nick chuckles. “I’ve never been to Chelmsford before, so I’m looking forward to it!” says Paul. It’s this sort of attitude that make the band so likeable. They’re clearly riding the crest of their newfound fame, but keeping their feet on the ground and not taking it too seriously at the same time. As long as they’re putting on good shows, having fun and putting a smile on the face of fans, the rest is irrelevance.

“A new record, fly round the world a few times and home again in time for tea!” says Nick, summing up their plans for the next 12 months or so. If you haven’t been lucky enough to catch them live so far, beg, borrow or steal a  ticket. Just make sure you join the party before that kettle goes on.