Fyfe Dangerfield: “There’s a real feeling of contentedness, a sense of hope” – Interview 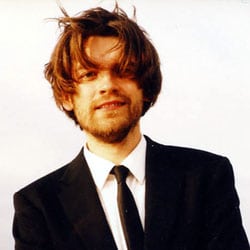 Fyfe Dangerfield is on temporary sojourn from Guillemots for a solo flight to a Yellow Moon. The Birmingham-born sometime music teacher’s debut solo album underlines his innate gift for lush melodies with radio-friendly tunes of varied pace and instrumentation.

While touring his band’s bells-and-whistles second album Red, Dangerfield was writing new material for what he initially determined would be a stripped-down work – the exact opposite to Red’s unabashed bombast.

“This record was going to be really acoustic; tracks like Livewire, Don’t Be Shy, it was going to all be like that,” he recalls. “But certain tracks took on a life of their own.” Lead single She Needs Me, a funky wig-out enhanced by soaring strings and parpy brass, was a case in point. It started life in acoustic form. “It’s become a different thing than what it was supposed to be, but it never bothers me to have a record where the styles move around,” he says.

Dangerfield is hyperactively animated as he enthuses about his album’s formative process, pausing the infectious flow only to run a hand through his unruly mop of hair. The album is, he says, about feeling good, about being in love. Although such feelings are necessarily personal, channeling them as a musician has caused him to complete a wonderfully uplifting collection of songs. It’s impossible to listen to Fly Yellow Moon and not be caught up in its mood of unbridled optimism, its delight in the here and now. It’s quite the anti-recession album.

But why isn’t it a Guillemots album? “When we were touring Red through 2008 I’d been writing a lot,” he recalls. “I guess I just had in mind that I just wanted to do something myself. I knew what I wanted them to sound like; a lot of them were just acoustic guitar and voice, with a tiny bit of piano or something, so there was no point doing them with the band. With Red we’d spend a day getting a snare sound right,” he laughs, shaking his head. “And we love that. But with this record I just wanted it to be about the songwriting.”

Accordingly, he wanted to complete Fly Yellow Moon’s songs on his own. “Any Direction started from my home demo; it was going to be an acoustic song, doing a duet with someone, but then I wanted to try something else, and did the most basic Logic beat, just so I could have a loop and add some keyboards to it.” The beat remained on the final recording. “Sometimes you just get attached to these things. That’s what I like about this new record; it feels like the most honest thing I’ve done in terms of not really thinking about things. That’s the spirit of this record.”

The finished album has a distinctively retro feel about it. “A lot of the stuff I’ve been listening to is not stuff that’s coming out now,” he explains. “I’ve been listening a lot to Late Junction on Radio 3. And Public Image Ltd, The Slits, ESG, quite a lot of stuff from that period. It wasn’t a conscious thing – of course that stuff just comes out – but I feel like on this record The Beatles influence is much more prevalent than on the two Guillemots records. It sort of reminded me that I used to listen to them so much when I was a kid, and a lot of this record just took me back to being a kid. So Brand New wasn’t going for a retro sound, but by the nature of what it is it has that sound from the way they used to record things, mic’d up more distantly. It reminds me of ’60s and ’70s. It sounds not thought about, not laboured over.”

The songs that make up the album, he says, “are generally written in tiny moments. I really like capturing those moments. So Brand New was written in about 20 minutes; I sat down at the organ, came up with a tune, thought it sounded nice. With Firebird, I woke up one night, I couldn’t sleep, and went through to the lounge and wrote that. I kinda like it when they happen like that; they’re all quite quick. It’s about capturing real individual moments. They have time to mull around in my head; you’d often have a verse and chorus or something, but the lyrics unveil themselves later.”

“It feels like the most honest thing I’ve done in terms of not really thinking about things. That’s the spirit of this record.”
– Fyfe Dangerfield on Fly Yellow Moon

Although he already feels like the album is from another time in his life, it was evidently a time in which Dangerfield felt at ease. “There’s a real feeling of contentedness, even in the more frought songs like Faster Than The Setting Sun, there’s a sense of hope,” he agrees. “It’s the other side of the coin to Red. They’re both records that came out of being in relationships, but different sides.”

He’s not someone who’s ever struggled for inspiration. As well as Guillemots he’s undertaken solo commissions and performs with Gannets, an improvisational alt-jazz quintet. How does he decide which project each song will work best with? “Generally when you write a song you hear it in your head, arranged,” he says. “Then it can change.” Yet rather than hedging his bets, there’s a sense that the many musical faces of Fyfe cross-feed, that he takes with one hand and gives back with the other.

And he intends to keep all the plates spinning. “I want to make my songwriting better, but I also just want to do things that are totally about sound, like instrumental music for films, and not even think about songs. Guillemots will keep going, and I’ll keep doing my own stuff, too. The others in the band are all doing bits and pieces by themselves as well.”

It’s a happy-go-lucky approach to music making, and Dangerfield is adamant that none of it was thought about in terms of what would sell best. “When these things arrive, they always look like they’ve been greatly thought about, but it hasn’t really; I had some songs, knew what I wanted them to sound like and booked five days in a studio. We weren’t thinking, ‘let’s make a record’, we just recorded some stuff.”

“We’re probably going to start recording in March. We have about 40 or 50 songs.”
– Fyfe Dangerfield on Guillemots’ upcoming third album

Ultimately, as countless band lead singers have before him, he’s enjoyed the change that comes with working on his own. “It was like doing demos really; I found that really liberating. Coming out of making Red, where we were just trying things over and over again, on this one it didn’t matter, so long as it catches the moment.”

His passion for music making is never sated by completing an album, however. “It’s a weird thing; when you finish something I’ll have a moment when I’ll feel really proud and then almost straightaway you think I’ve done all these things and still not really touched on what I really wanted to do.”

And that’s just as well, for as he prepares for a clutch of solo gigs to show off Fly Yellow Moon, 2010 is looking like Dangerfield’s busiest year yet. “In Guillemots we’ve spent the best part of the year writing,” he says. “The last record we wrote together, but it was a difficult process. We went straight into it after touring the first album; we didn’t have time to think, to dream it up; we just had a few weeks to rehearse and then we started recording it. We were figuring out the songs in the months when we recorded them.

“For our next record we just want to get loads and loads of songs together and then record them live and add bits and pieces into them. We’re really hyped about that. We’re probably going to start recording in March. We have about 40 or 50 songs.”

At the end of our chat he hands over a copy of his brother Al’s band The Courtesy Group‘s CD, on which he played guitars, keyboards, percussion and saxophone. Yet another project? It’s as though this Guillemot has only just begun to spread his wings.

Fyfe Dangerfield’s debut solo album is out on 18th January 2010 through Geffen, preceded by the single She Needs Me a week earlier. He plays the London Scala on 21st January.