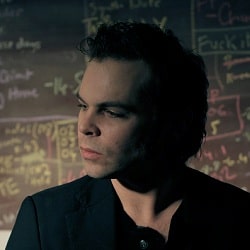 Meeting Gaz Coombes about his first record since the passing of Supergrass, we find him with the first pint of the evening in hand. He has a radio session the following day ahead of a London gig, all in support of his first solo album, Here Come The Bombs.

Coombes considers his solo career is starting with a blank page. “It was all about piecing the album together in my mind, in the studio for nine months, and now I’m at the point where I’ve got to explain my actions,” he says. “Once I’d started there were certain elements that came forward but I knew what I wanted to do. The beginning was very shady, and the turning point came when I knew I was on to something.”

He speaks with unflinching confidence about his achievement, the first album from a member of Supergrass since the band called time on their 17-year career. There was a strong sense of a line being drawn in the sand. “There was no leftover material, so what I started out with was all brand new material. I reached a cool plateau with my studio in Oxford, and I had some new toys to play with, both contemporary and different, to try something new. It was about getting my studio to a point where I could get really good new sounds, and I did that using different drum machines and synths you could play stuff in to. I was messing around, experimenting, making a lot of weird sounds.”

It was, he says, a natural process. “I would get ideas for a beat while I was having a cup of tea, so I would get that down, and usually it sounded how it did in my head. I treated the process like making demo recordings, and that was how I wanted to go, by instinct.” And one thing soon led to another. “That’s pretty much it. The beat would inspire the next idea, the sonics and getting inspiration from the part I’d just put down. I’d end up with something like a cinematic bell sound over the top, but the key is always making sure there’s a song underneath it, a focus. It was about experimenting but also trying to keep it together and delivering it in a focussed way.”

A standout on the album is its fifth track, Universal Cinema, a mini-suite that weighs in almost twice as long as the surrounding material. “It was one of the later tracks on the record,” says Gaz, “and it came about through discarding another one that left a big hole. I wrote that song inspired by soundtracks, and especially the space in some of the ones I love. I was in to a non-structured song, with different nuances and dynamics.”

“It’s good to look around and see what else I might have missed. Inspirations change over the years. ” – Gaz Coombes

The artistic freedom is clearly a part of the process that Coombes relishes. “I’ve been in a band for over half of my life, inspired by the Rolling Stones and the New York Dolls and bands like that. It’s music that I love, it’s close to my heart, but it’s good to look around and see what else I might have missed. Inspirations change over the years. There is no band, I’m on my own, and so I can start any sound at any starting point. A weird noise might be a starting point for me, and soundtracks have that element where they can offer that.”

His personal life provides more inspiration these days, too – such as being a father to two daughters. “There’s a lot there to tap into,” he agrees. “From my late twenties onwards a lot of things in my life have thrown me in to a strange place but have informed my life, the extremes from tragedy to joy. Once you have that to draw on things become more prevalent in life, and there’s more to tap into, more vignettes and stuff. I’m conscious of not moaning about things I hate in life but to me it’s about reactions, and the album is a photo album of sorts, with thought processes. I’m pleased to have put that down.”

For now he remains blissfully ignorant of the reaction to Here Come The Bombs. “People are into it but I haven’t really got a clue at the moment, I could never second guess. I knew I felt I had a great record, and I hoped people would take it at face value. You can’t please everybody, but this is the album I wanted to make, it has my stylistic inspirations, and it’s natural to me. For me it felt like something new, and fresh, and exciting, and all about not trying to live off the past and successes. We went to the Camden Crawl and The Great Escape, and I was performing alongside all the new bands. It was amazing, and it feels so good. It doesn’t matter if it’s all in a bar with 100 people in it, because it takes me back to being a rookie.”

Does he think people misread Supergrass a bit though, and missed their hidden depths? “That was just because of Alright,” he says, “which we’re really proud of. They were great moments – Richard III, Pumping On Your Stereo, all those songs we did, but the greatest thing about an album is that you get to hear your favourite band in their weirder moments. That’s where you really get to know your band. We were experimental, and a strong band musically, so we thought ‘let’s play to our strengths’. That’s why it sounds really different when you listen to a Supergrass album; the boys aren’t always doing their trademark stuff.”

Here Come The Bombs is only the beginning – for Coombes has the spirit of a man reignited. “There’s loads of stuff I’m after doing. I’d love to do a great soundtrack, and I’d love to span Gaz Coombes presents’ over other things as an ongoing project, as well as solo records – though I don’t really like that expression.”

Going solo will only extend to the writing and performing, mind. “I make the record and hopefully have people to present it, because I’m not an expert in that field at all,” he explains. “These days the turnover is unbelievably fast, not just for music but for information also. Making a record in your house and putting it out is incredibly liberating, but you have to trawl through a lot of shit too when you look on the internet. You adapt, because it’s totally different to how it was when we started out as Supergrass in 1994, although the essence of making a record and playing it live remains the same.”

The first Gaz Coombes Presents album, Here Come The Bombs, is out now through Hot Fruit/EMI. He plays at the Big Feastival on 1 September 2012.