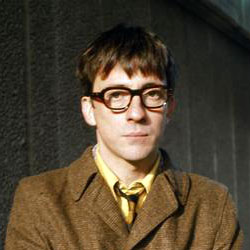 In an attempt to explore art, music, ways of listening and seeing, as well as enticing a younger audience to exhibitions, the Tate Modern has invited eight music acts, including The Chemical Brothers, Klaxons and Graham Coxon, to each compose a piece of music inspired by a work of art of their choice. Coxon, a prolific painter as well as musician, chose Franz Kline’s Meryon to inspire his piece. This can be heard at a listening post next to Meryon at the Tate from 1st November.

We caught up with Coxon as his current tour comes to an end to talk about art, music, meditation and walking boots, and wondered how he came to choose Kline’s work for his inspiration?

“I’ve always liked Kline. It was the first abstract art that got me going really, that I unashamedly said I liked and I didn’t care if I understood it or not. It just gave me good feelings and a thrill, and that led on to other things like De Kooning, and Patrick Heron. Usually, I respond better to figurative stuff but I like that stuff.”

Coxon’s piece of music for the picture is a soundscape of guitars and noises, musical shades unlike his commercial sounds that straddle punk pop sensibilities. How did he come to write the music? “I set up mics and set sounds and vibrations off with guitars and things, walked around and used echo machines.

“I meditated on the piece too. I think people should meditate, or even have a bit of quiet time looking at a painting. I think people would look at that painting for three seconds and discard it as being just blobs. Most people do that with abstract art, they don’t take it seriously. I think art is really lot more about self reflection than what you think the painting is about.”

The idea behind Tate Tracks is to encourage a younger audience to exhibitions. Coxon was an obvious choice – as a prolific painter himself. He studied at Goldsmiths, with contemporaries including Damien Hirst and Abigail Lane. Coxon began painting as a child. “It was just something that was part of my way of communication as a kid. You can’t force people to get into something and there will always be kids who like art and kids who don’t.

“I think people should meditate, or even have a bit of quiet time looking at a painting…”
– Graham Coxon on the soothing effects of visual art

“I think visual art is extremely healthy anyway. Most of the people I know are involved in visual arts rather than music, even if it’s wacky graphic or magazine art. But some people, who might be known as the working classes, aren’t given much chance to give a fig about art. They’re getting on with their lives. I don’t know if it’s a middle class obsession or ego boost.”

Coxon’s art work has adorned many album covers, including his six solo LPs and Blur‘s 13. He’s also exhibiting a retrospective of his work at the ICA from the end of October. I wondered how does he start painting a picture as opposed to writing songs. Are there differences in the creative processes? “It depends, sometimes you have to sit and try and get one going, sometimes not, but I try and draw every day. And play, of course.”

As well as painting, Coxon tours regularly. Does he still get that constant adrenaline whilst playing live? “No I don’t! In my advanced years, I have to help myself get up to that point. I tend to sleep and lie around on the floor all day, and read. I don’t get hideously nervous now. About half an hour before a show I chuck down a couple of red bulls and then I’m all ready. I need to have electric shock therapy. I have a constant mild depression instead on tour. You sit around in a funny room with loads of peanut butter and double deckers.”

On a serious note, Coxon has lived with depression for some years, and having stopped drinking alcohol in 2002 following a stint in rehab, I wondered how he copes with his low mood on tour? “I sit through it really. At home, there’s always stuff to do, with my daughter or go and ride my bike, but on tour there’s nowhere familiar to go to. Normally, I’ll find a Caf Nero and a Millets, and I go and look at walking boots and drink loads of coffee and that makes me a feel a bit better and then I read a book, lie around in bed and watch the news. I like a nice chunky leather boot that you can walk all around Derbyshire in… I’m fond of Derbyshire… and Wales. I love England, it’s the best countryside in the world.”

Graham Coxon’s double A side single What You Gonna Do Now?/Bloody Annoying is out now. Coxon’s Tate Track is at the Tate Modern from 1st November 2006.