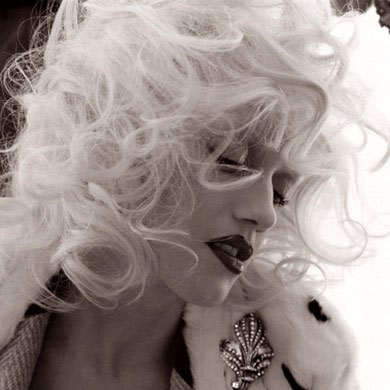 As the face and voice of No Doubt, Gwen Stefani became one of the most recognisable pop stars of the ’90s. In 2004, Stefani released her debut solo album Love. Angel. Music. Baby., a more poppy affair than the ska-tinged music of her band. musicOMH caught up with Stefani recently to talk about her solo career and her recent move into acting, in Martin Scorsese’s The Aviator.

“Wow, you’re hot!” No Doubt’s effervescent singer Gwen Stefani, is impressed by my figure. I’m surprised by her svelte body, expecting a more athletic build. Nevertheless, the glamourpuss is hungry and needs a pick-me-up before dinner – and this interview. “I’ll just eat half of that and then I’ll be fine,” she says as she unwraps a sugar-laden protein bar.

Bearing the same name as her own clothes line, her first solo album  Love. Angel. Music. Baby. is full of fashion-savvy references to her favourite designers, including Galliano, Vivienne Westwood and Comme des Garons. Good product placement or is a package of free clothes on the way? “They don’t give me free clothes. I did it because I think they’re rad and want to talk about them. Vivienne Westwood is one of my all-time favourites. I’d give all my money to her and buy all her clothes!” But L.A.M.B. is also full of the musical references of her teens. “It was the dance, popular music of the time and it had a really strong imprint on me, because it was a very inspired time for music.”

If anyone had to pay an ode to the ’80s, it was certainly Gwen Stefani, the quintessential offspring of that decade who spent her teens listening to KROQ and dancing to Prince and Duran Duran on the dancefloor of Videopolis, under the shadow of Disneyland. “I had really strict parents. It wasn’t like I was driving out to L.A. clubs.”

She was just an Orange County girl, listening to ska: “Madness, The Specials and The Selector. It was really underground when I first discovered music. Then I met Tony (Kanal). He thought he was Prince!” No Doubt’s bass player turned her on to other sounds. “Lisa Lisa and The Cult Jam and Club Nouveau. Of course we were also listening to Depeche Mode, The Cure and Madonna had just come out. Her early tracks are so wicked!”

“They don’t give me free clothes. I did it because I think they’re rad.”
– Gwen Stefani on her album’s references to her favourite fashion designers.

L.A.M.B. is the ’80s flavored dance album that she’d always dreamed of making, with a hoard of guest-stars including New Order, Dallas Austin and Nellee Hooper – before time ran out and it was too late. “I was on the Rock Steady tour with the guys. It was just such a magical time. I turned on a Club Nouveau song and said to Tony, ‘I wanna do a dance record before I die!'” Simple as that. Well, not exactly. “When I started thinking about this project, I was like, I’m going to make a wish list of my favourite talented people that are in the club now, like Dr. Dre, Andre 3000, The Neptunes,” she recalls, “So I thought it was going to be a really fun, easy side project I could do and put out in a few months. It turned into this super-hard, long, drawn-out, life-challenging thing.”

She also discovered she actually didn’t know how to write a song. Really, Gwen? “It’s really challenging to go in and put yourself in such a vulnerable position where you’re sitting with somebody in a room you’re a huge fan of and thinking, What if I can’t think of anything?”

Her insecurities are depicted in the video for the first single What You Waiting For, where Gwen plays Alice chasing around the rabbit, symbolizing inspiration, in Wonderland. “The whole video was a true story. It was like time was ticking in my ear. It was the perfect metaphor for the way I felt making this record.” Afraid of time running out, Gwen was hearing the tick-tock of the clock, pressing her to do all that she’s ever wanted to do – and getting a little push from Kanal himself, who also produced two tracks on the album, and former 4 Non-Blondes leader Linda Perry, the woman behind hit songs by Pink and Christina Aguilera.

“I’d never worked with the woman before. What’s the worse that can happen? Write a shitty song and waste a day of your life?” But those darned insecurities crept up on her, drawing tears – “I went in the studio the first day and cried.” The chemistry between the two was so string, however, that it dissipated the confusion. “Linda was so magic, driven, inspiring and beautiful. She was saying: ‘What you waiting for, Gwen? C’mon! I know you got it in you!'”

“It turned into this super-hard, long, drawn-out, life-challenging thing.”
– Gwen Stefani on the process of recording her solo album.

While No Doubt will go on, she is already planning the next phase of her career, looking for that perfect role. In her silver screen debut, she plays lookalike Jean Harlow in Martin Scorsese’s Howard Hughes biopic, The Aviator. “I have two lines, so it’s pretty minimal.- In fact, she treads on comfortable ground as her part consists of walking the red carpet.

“It’s like, oh OK, I know this!” she laughs. “It was so real when I walked out the car with Leo (di Caprio). He’s incredible, one of the most talented male actors out there.” As for Scorsese, he was “just magic. He’s so passionate and can’t stop talking about the whole project. He’s so excited about it and knows so much about everything. He just makes you feel totally at ease. That’s probably what makes him such a great director.”

No doubt the movie offers will pour in, but for now, she’s biding her sweet time, even if she feels her other clock – the biological one – ticking away. “I’ve wanted a baby since I was a baby, but I think it’s not up to me. It’s like when a song writes itself. My life is writing itself. I never thought any of this would be my life. Honestly, I’m just that girl who was in Anaheim with my best friends.”

Gwen Stefani’s Love. Angel. Music. Baby. is out now through Interscope. Tour dates and further information can be found at gwenstefani.com