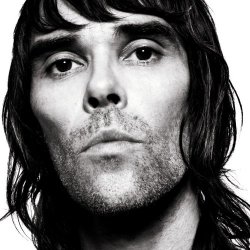 It sounds unbelievable to say it, but Ian Brown’s solo career is now longer than his recording tenure with The Stone Roses.

To celebrate, he is the proud author of a best of, modestly entitled The Greatest, rounding up his singles with remixes and live tracks.

No doubt he’s been talking about this in his hotel room all afternoon, but when we arrived he was still wired and up for it.

“Whenever I’m doing interviews and stuff I always think of when I was starting out, working with pigs’ tongues in a factory, and I think, ‘this is much better than that’, you know?”

Brown is relaxed, and, as you’d expect, incredibly self-assured, qualities that were no doubt evident when he was first discovered. So when did he become aware of his unique vocal talent? “By getting signed. I always believed our songs were good back in the day, and I guess it was Geoff Travis of Rough Trade, when he said, ‘I think you can be the best of your generation’. Before that I’d been at a party with my girlfriend when I was 21, and DJ Washington told me I was a star and should be a singer.”

“It’s never been about the money. I’m not saying I couldn’t use a million, but I’m not gonna debase what we had.” – Ian Brown on the latest Roses reunion offer.

Was the transition from group to solo artist difficult to achieve? “No. Originally when we did the Stone Roses songs John (Squire) and I would do them all, me doing the lyrics and John the guitar lines. He wrote all the bass lines, and Mani and Reni got credited as they played them. The solo stuff was easy as I already had the naked songs, and some of them were for the next Roses LP My Star, Can’t See Me, Sunshine. Now I can put the echo up as loud as I want! We used to put the voice down a level when we were recording, John Leckie always got me to turn it down a bit, but now I turn the voice right up, have things how I want.”

Brown seems more at home on the live stage than he’s ever been. “Yeah, yeah, cos of seven, eight years going solo and having more songs to perform. I’ve definitely improved along the way – my motto is to improve always!” So where to next? “The Greatest, volume two! That’s how it feels at the moment. I’m touring, going to China, Australia, so when I come out of there in January next year I’ll be recording the fifth LP. There’s also a live album which should already have ten or so tracks on the shelves, and I’m gonna be working with UNKLE again on a track for his new album, and the Scratch Perverts as well.”

The new album will see Brown working with his live band in the studio for the first time. “We’ve been round the world together – New York, LA, Osaka, Tokyo, Glastonbury, T, V, Blackpool, Brighton. We’re like Man Utd: the old, experienced heads and the young ones, hungry for it. It’s only fair I should give them the opportunity to record on the album. The two guys from Fool’s Gold (the Stone Roses tribute band) haven’t been in the studio before. It’s a great opportunity to give payback to them, let them express themselves, and give them a publishing deal. We’re playing for each other now!”

So how does he feel about performing the Stone Roses songs again? “Great, you know, they feel fresh. I had a crazy idea about it at 3 in the morning, then tried it out and realised I could remember all the parts, all the words. I’ve not done them for thirteen, fourteen years but the voice is there!”

“There’s no rebels with guitars, you know?” – Ian Brown laments the state of the current music scene.

Brown was recently offered 1million to reform the band. “That was the latest offer, but I don’t wanna cheapen what we had – it meant everything to us after five years on the dole. We always believed, we never stopped thinking. Now, it’s like, I’ve got a nice house, I can have a chicken dinner every day, I’ve got two hundred pairs of trainers, electric gates. But it’s never been about the money. I’m not saying I couldn’t use a million, but I’m not gonna debase what we had.”

Of all the bands reforming after years apart, Brown has special mention for just one. “The Sex Pistols made it work because of the money they took off the music business, they didn’t have it first time around. Paul Cook could really hear what the songs were about as well. They should have electric gates, all that stuff!” So what of today’s bands: are they taking things forward or too derivative? “They probably are derivative, yeah – people’s main agenda is to be a star rather than take things forward. Rebels these days are rappers or in dance music – there’s no rebels with guitars, you know?” He goes on to talk of an “over politeness” at Live8, before stating, “the main result of Live8 was to shift Pink Floyd LPs, wasn’t it? I’d be more concerned about the charities rather than that, where would the world be without any charities?”

The immediate future looks very bright for Ian Brown. “Going to China in two weeks time, I can’t wait, a culture that’s 5,000 years old! I’m still pinching myself that I’m going – we’re playing the Beijing pop festival but we’ve got a couple of free days as well, so it should be amazing.” In terms of live dates however, one in particular comes to the singer’s mind repeatedly. “Since January I’ve had something live virtually every week, it’s been a brilliant year. Glasto was the best live experience for me, though, I’ll be buzzin’ forever from that one. Even when I’m, like, sitting in a chair and not able to do much a little bit of me will always have that, right in there”, he says, thumping his chest.

Brown describes his retrospective as “an amazing opportunity, the best of the four LPs and a couple of live favourites”, and he’s clearly made up with the current state of affairs. And yet it seems there is still much, much more to come.