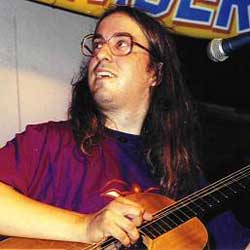 J Mascis is, quite simply, an alternative rock legend. With his band Dinosaur (later Dinosaur Jr after some obscure, dinosaur rock band claimed the name), he released three albums in the ’80s.

They were to be crucial influences on Nirvana and their peers, as well as the lo-fi, indie-rock scene led by the likes of Pavement.

They quickly became hard to get hold of.
But they are soon to be reissued with remastered songs, bonus tracks, new artwork and sleeve notes courtesy of such luminaries as Sonic Youth‘s Thurston Moore.

musicOMH caught up with Mr Mascis – a solo artist since disbanding Dinosaur Jr in 1997 – to discover if his reputation of being difficult to interview is well-earned or not.

I’m sitting in a plush hotel in London’s upmarket South Kensington area. If you hang around long enough you’re sure to see at least one celeb on their rounds and J Mascis’ press guy is excitedly telling me how they’ve just seen Dolph Lundgren going into the dry cleaners. As it turns out, this won’t be the last mention of the musclebound baddie from Rocky IV.

Mascis is slightly late, having disappeared to his room. His manager assures me that “he’ll mosey on down soon – he’ll just do it slowly!” Anyone who knows anything about J Mascis will know that this is entirely in keeping with his reputation and, indeed, when the man who plays guitar louder than one of Jonathan Ross‘s suits arrives, the world around him does seem to go into freeze frame, from his ambling gait down to his uncommitted handshake.

Mascis is notoriously hard to interview and “laconic” – dictionary definition, “using a minimum of words; concise to the point of rudeness” – is a word that seems to follow him around like “flamboyant” did with Liberace.

I decide to take the dinosaur by the horns and ask him if it’s a fair assessment to say that he doesn’t like interviews. He responds in a lethargic Massachusan drawl that is a point-for-point, spoken version of his singing voice:

Why? Because they’re boring?

So I have a low benchmark to beat, then?

So far, so monosyllabic. However, as the interview progresses it becomes apparent that Mascis is not laconic out of rudeness. Instead, he simply seems shy, introverted and someone for whom ennui comes easily. Later, when he’s feeling more at ease and, would you believe, cracking jokes, he will freely admit, with an embarrassed laugh, that:

Given that music is his passion, it is slightly relieving that Mascis is a little more effusive when discussing the subject. I ask him if his trademark, decibel-defying guitar sound is related to the fact that he started life as a drummer.

“Yeah, I think so. It seemed so wimpy at first when I started to play [guitar]. So I started playing loud with lots of effects just to try to mimic the dynamic [of the drums]. Drums seemed a lot more expressive. [I was] Trying to emulate the feeling of playing the drums on the guitar – I guess that’s why I played it so loud.”

“I have limited interests. I really like all sorts of gear. Guitar gear. Recording gear. Stuff like that. I like music, you know.”
– Alternative rock legend, J Mascis is a man of simple tastes.

Mascis’ blistering guitar solos were one of the highlights of Dinosaur Jr’s records, a feature (still) unique among non-heavy rock bands, and something which was responsible for drawing together indie, alternative and metal fans in admiration.

Of course, this amalgam of genres found its commercial fruition in the grunge revolution of the early ’90s. However, while Nirvana and their ilk sold millions, Masics & co continued to remain a largely cult phenomenon. I wonder if this bothers Mascis, especially given that Dinosaur Jr had influenced lots of the bands who caught a ride on their coat-tails. He laughs that nervous laugh of his:

It is at this point that our bodybuilding, Swedish, quasi-actor friend gets a surprise namecheck:

“We just saw Dolph Lundgren down the road. He was at the dry cleaner in his Benz. I was thinking, ‘Yeah, I guess it would be cool to have a Benz.’ But there’s a lot of pressure if you have a Benz – everyone in the neighbourhood thinks you’re an asshole!”

Stunned by the unexpected garrulity, I manage to recover and posit that Mr Lundgren probably lives in a neighbourhood where he’s not the only one to possess a Mercedes. Mascis reiterates that his Amherst locale is not such a place:

“Yeah, but where I live, a Benz is a bit much. People would think you’re a dick if you had a Benz.”

“I don’t know if it would be cool either. Kurt Cobain’s dead, so I guess it wasn’t too cool for him.”
– J Mascis sees the positive side to not having sold as many records as the bands he influenced.

He goes on to a simple yet profound comment on fame:

“I don’t know if it would be cool either. Kurt Cobain’s dead, so I guess it wasn’t too cool for him. There’s always a price.”

Despite not selling millions of records, at the height of the press’s obsession with grunge, even Mascis was persuaded into some out-of-character, extrovert scenarios, as he recalls:

I survey the man sat opposite me. He’s 39 years old, has shoulder length hair that’s exclusively grey, is wearing thick-rimmed spectacles and a purple tracksuit top. I have no option but to confess that I am struggling to think of an occasion for which he would need a suit. He bats the remark back as if he were a seasoned comedian:

“You know, funerals and weddings [laughs a lot]. I wore it on a TV show once. I have to wear a suit every once in a while, like for… [long pause]… going to court!” [He laughs again].

One possible reason for Mascis not getting many more press invitations to shop for $1000 suits is that, in contrast to the relentless gigging ethic of his peers, Mascis had a reputation for not liking touring. I ask if that’s true, thus inadvertently providing him with an opportunity to display his likeable, self-conscious wit again:

Has his attitude to gigging changed now?

“I tour more now because I get restless at home.”

And because he gets to see people like Dolph Lundgren in a Mercedes-Benz?

“That was funny. You know it was pretty minor… I don’t even remember what he was in. Rocky? I’ve seen more famous people that I’ve been more excited at seeing.”

“I was excited to see Max Crumb, Robert Crumb’s brother. I saw him somewhere and was pretty starstruck.”

If I were a psychologist, I’d be telling you that there’s something revealing about the fact that J Mascis is in awe of a cult comic book writer [Robert], whose father was a violent ex-Marine who was disappointed that his sons turned out to be nerds rather than football players, and who was portrayed in the 1994 film Crumb as a misfit whose art was his only means of communicating to people. Instead, I’ll settle for saying how wonderful it is to meet someone who we can safely say has never, and will never buy a copy of Hello!

As we finish, I ask J how the interview rated on the boredom scale. Almost more to his surprise than to mine, he says that it was “okay, actually.” Then, as a measure of how far we’ve come, he tries to explain what sort of interviews he doesn’t like by telling me about a recent occasion where the questioner was asking him how many times he’d been to London.

“I don’t know! I couldn’t even begin to guess.”

Well J, whatever the answer is, it’s too few – you’re welcome back as often as you like.