James’ Tim Booth: “We’re getting on great, we’re not carrying any addicts” – Interview 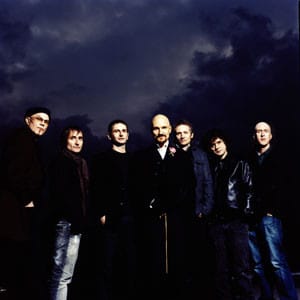 There is a common misconception that James are a product of Britpop – but when you consider the band are celebrating 30 years together this year, that thought soon becomes redundant. To celebrate the achievement they are releasing a career-spanning box set, The Gathering Sound, which contains a USB stick with all the albums, as well as newly published rarities and live material.

To discuss this landmark achievement further, we’re on the phone to lead singer Tim Booth, who offers a bit of Californian warmth down the phone to this particularly cold London office. Booth, as he has done for many years, divides his time between both sides of the Atlantic. We don’t have much time with him, so after a cheery greeting it’s straight down to business. Given the box set has been five years in the making, how did it start?

“It’s The Gathering Dust, that’s what I call it.” He snorts, and then laughs. “It’s 30 years in the making really. Universal have been trying to put it together for three years, and every time we thought they’d finished there would be something appallingly wrong with it. The thing’s been ready to go for a year and a half but then we discovered the USB wouldn’t work with an Apple computer – we could all see that might be an issue!”

Does it feel like taking receipt of a big birthday present? “When I get a copy it might do! It’s a nice idea but I haven’t had it in my hands yet, so I don’t know what it feels like yet. It’s a thing that isn’t real, that I’m looking forward to experiencing. Our new songs that we’ve been writing in the last few weeks are going off in a new dimension, so now it feels like we’re going off in a different direction. The orchestra tour that we completed last year was linked to that.”

Rather than looking back and resting on laurels, he is happy and excited to look forward and talk about the new songs. “There’s one in particular that has a million different parts to it. I love those ‘journey’ songs, like The Beatles‘ A Day In The Life. That was created through an accident, but those songs are to die for. There are a few songs on the set for us that I would put in the ‘journey’ category, and they are English Beefcake, Verveaceous and Gold Mother. The first album has a song called Summer Song that took years to construct, and the same with a song like Billy’s Shirts, which we found was impossible to play live! It’ll be a mixture when we go on The Gathering Sound tour; we’ll be getting overexcited about the new songs as well.”

Was it important to Booth that with the return of the Stone Roses in 2012, James stood up as if to make a statement and say, “We’re still here, we haven’t been away, and look what we’ve come through?” He bristles at the suggestion. “It doesn’t cross my mind about the Stone Roses to be honest. They’re a different kettle of fish to us, and how many albums have they got? Two?” The potentially scathing statement hangs on the air until he qualifies himself. “We didn’t launch a movement, they did, so at that point it’s about something else. It’s about the iconography, which is not something we’ve either wanted or achieved.”

“The music was created to try to make sense of our world. The lyrics are very much subconscious diary entries for me about how confused I am, and was.” – Tim Booth

James, however, have a large and fiercely passionate following. Does he find it gratifying to have people who care so much about the band and their music? “I do,” he says with feeling, “because I think we’re about music that we feel lasts, and isn’t necessarily of a time – although a few of our songs are, of course.”

With the 30-year anniversary, Booth feels in a good position to be able to answer the question of what the band means to him. “Since we came back, it’s been the most enjoyable period just about in my memory, although the very first two albums were special as well. We’re getting on great, we’re not carrying any addicts and we’re really healthy. There is an appreciation out there, and a connection with the audiences that really excites me.”

The band’s global appeal, it seems, is stronger than ever. “In South America they’re really young, in Greece they’re in their 20s and 30s, then I would say in England they are older. It’s really exciting playing to different cultures and age groups. We get completely off our heads on what we do. We’ve just been locked away in a remote part of Scotland, where we’ve been writing new stuff, and it’s gone really well. When you do that you get as high as a kite, it’s about ecstasy and following your bliss. Music, dance and writing is my spiritual home – at least it is on a good day, when the sound is good, and the wind is in the North East.”

“The music was created to try to make sense of our world. The lyrics are very much subconscious diary entries for me about how confused I am, and was.” – Tim Booth

Was it the expectation when James started that they might get to this point? “No, but we were puritanical in our belief that it should be all about the music. We just wanted to play live, but then we reluctantly released singles, although we wouldn’t do interviews or have photographs taken. I believe we were the first band not to go on the cover of the NME. We did have to compromise doing interviews, because to start with we felt that just the music alone would do it. If you compare us with the Stone Roses they are a band the media love, but we never gave the media stories and we never made it easy for them to write about us. In a way it’s allowed us to continue for longer.”

James, then, was born out of very personal reasons. “The music was created to try to make sense of our world. The lyrics are very much subconscious diary entries for me about how confused I am, and was.” So what has been the secret of preserving the distinctive Tim Booth vocal? “When we were working together, Brian Eno once said to me he thought there are two types of voices – ones that scream and ones that croon. “You’re a crooner!” he said to me. Frank Black once taught me how to scream backstage at a festival but I couldn’t really do it. Now though my voice is weathering and getting tougher.”

There is a confession, however. “I never saw myself as a singer,” he somewhat surprisingly states. “I thought of myself as more a dancer and lyricist. I never saw myself as a great singer either; it took me seven years of singing before I even liked it! Saul Davies, in the band, he plays the most amazing violin but I can only get him to play one, maybe two songs in a night. I am surprised at how it seems to be getting better though, and that’s the idea with the new songs. I get inspired by seeing singers who are always improving too – I went to see Leonard Cohen this year, and he is singing better than I have ever seen him sing!”

James’ first ever box set, The Gathering Sound, is out now on Universal and can be purchased here.

In celebration of the set they are touring the UK with Echo and the Bunnymen, beginning at Glasgow’s S.E.C.C. on Saturday 13 April 2012, and ending at the Manchester Arena on Friday 26 April.