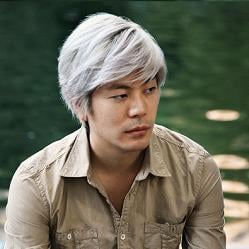 “New York is kind of like London today. It’s rainy, grey, and a little depressing.” We’re on the phone to James Iha, the guitarist whose striking features made him an instantly recognisable founder member of the Smashing Pumpkins, up until 2001. Since then, Iha has pursued a number of parallel musical ventures, most notably with his band A Perfect Circle, the rock ‘super group’ that he joined in 2003.

Iha lives in Brooklyn, and when we talk it isn’t long since ‘super storm’ Sandy was in town. “I was fortunate to live in a part of Brooklyn that was not hit with flooding or a power outage,” he says, “but it was a pretty devastating hurricane for a lot of people. It’s worse in some areas but people are starting to get on with it.”

Our conversation is to focus on Look To The Sky, which is only James’s second solo album in 14 years. The first, Let It Come Down, offered some escapism from Billy Corgan and co, being a sundrenched antidote to the twisted angst of the Pumpkins. But this one is rather more adventurous, reflecting perhaps how far Iha has come stylistically since 1998. “I haven’t really looked at my first record for a number of years,” he admits. “My impression of it now is that it was too much of a one note thing, and I wanted this record to be a wider range of tastes, to be more eclectic and plugged in, and to be more atmospheric, with more keyboards.”

Would it be fair to say he has discovered a lot of music since then? “Yeah, definitely. When I did my first solo record a lot of it was stuff that didn’t fit for the Pumpkins, and we were doing a lot of touring and heavy shows, so a quiet record was my natural reaction. Like everybody my tastes are wide, and on Look To The Sky I worked with a lot of people producing who were able to give different kinds of energy.” Guests on the album include Nina Persson of The Cardigans and Karen O of Yeah Yeah Yeahs, but Iha is keen to stress he remained at the centre of the creative push. “It looks like there are a lot of guests, but I did most of it. There’s a bit too much of me, so it’s nice to have those guest artists come on board, they were the icing on the cake.”

Some of the tracks are distinctly abstract, including one of the central songs, Appetite, which proves notable for its odd, dream like harmonies. “I went through a couple of changes at the time of writing that, it was a bluesy acoustic song to start with,” he recollects. “I had the riff, and I had a friend play jazz brushes and drums on it. I thought it was good, but then I took the instruments out and put the nightclubbing drum beat on it, and it became more cabaret. When that pop beat went on it I thought of the pianist Mark Garson, who toured with the Pumpkins and who played with David Bowie, and invited him on. Once he was there it became a dark cabaret record. It felt good, changing it around. I think I need a lot more minor key songs like that, it’s a good change of pace.”

There are some darker sides to the album, in contrast to the dappled sunlight of Let It Come Down. “Yeah, I guess there are a couple of songs with a cinematic feel,” he concedes in his languid tone. “My friend Nathan Larson, he did the strings on three songs. The lyrics often have a ‘stream of consciousness’ feeling, and some of the album has a cinematic, Velvet Underground kind of feel.”

For a long time Iha lived in Chicago, where he was based during his term with the Pumpkins, but he is enjoying his relatively recent relocation to New York. “There is definitely a lot of energy, a lot of stuff and shit happening all the time. I like it, there’s a lot of cool bands around. Most of the people on my record live in New York.”

“I don’t know how well I do it, but it’s the only thing I’m decent at”
– James Iha on making music

His style also suggests he has been checking the output of labels and institutions such as DFA. “I’ve always liked the new electronica that there is in the city, there’s a lot of great things happening. There is a song called Waves on the new album, and that to me sounds like a couple of the newer dance things like Ryksopp or When Saints Go Machine. I want to experiment and try different things, and that was one of the songs where I did that.”

So which is easier, being a solo artist with the added responsibility, or being in a band as potentially volatile as the Smashing Pumpkins? “It’s difficult to say, as it’s been so long since I made a record! It’s a freeing kind of feeling to work in that kind of songwriting and production, to manage what you’re doing.”

Iha also has a number of film scores under his belt, including music for the Japanese film Linda, Linda, Linda, and this is an area of his work that he wants to expand. “I’ve been thinking again that I should be doing more film score music, it’s fun making music for pictures rather than for songs.”

What drives him musically – is it music as a means of expression? “I don’t know how well I do it,” he says with a little faltering modesty, “but it’s the only thing I’m decent at. I guess when I feel inspired it’s a feeling of ‘I can do this, I wanna do this’. I’m walking a musical kind of feeling, and when you can write something that sounds good, it’s one that’s inexplicable. I’m sure this feeling can be found in arts and sports, if you win the game by scoring the winning goal. It’s on a par with any of those things.”

Is music his only art form though? It would be fair to assume with his looks that he might get invitations to model. “I used to get asked to do fashion though not so much anymore, but I still work in Japan. We were definitely an interesting looking band, the Smashing Pumpkins, long before we had a record deal. People used to say we were a weird looking ban. We certainly stood out!”

One of the band’s towering achievements, the double album Mellon Collie And The Infinite Sadness, has just been reissued by EMI with a vast swathe of audio and visual extras. Perhaps not surprisingly, now he has left the band, Iha has not been involved, and indeed sounds relatively disinterested. “I think the Pumpkins stand the test of time, and that those records are really good records. I think there was a high standard with B sides, too; they didn’t necessarily fit the record but it was all really good. I haven’t been involved in the remastering process at all, but I’m sure they sound great.”

For now his concerns are very much in a forward looking direction. “Yeah. The Pumpkins were great, they were a huge part of me, but since then I’ve tried to do a lot of different things, such as working on A Perfect Circle – we’re going to tour next year.” There are more solo dates in the pipeline when we speak, although he notes that “it’s hard getting to Europe with the cost of touring and everything. We’ll do a week in Europe at the beginning of December, and then try to come back with a schedule.”

A Perfect Circle, whose line-up is currently five strong, have new material too. “It’s heavy,” says Iha, with a satisfaction to his smile that is audible across the Atlantic. “I guess a lot of rock fans are familiar with the bands, but I can say it’s not as heavy as Tool. It is pretty heavy and dramatic in a different way though.” As for his own songwriting, Iha promises “I’m going to try to turn around another album much sooner than the second record!” Let’s hope it’s much sooner than even half that gap – seven years would be far too long. For now, though, the sense is that of a figure emerging from the shadow of one of the 1990s’ foremost rock bands with his credibility well and truly intact.

James Iha’s album Look To The Sky is out now on The End. His website is regularly updated with new content and tour dates when available.