Jamie T: “I don’t want to be some pop star. I just want to make good music” – Interview 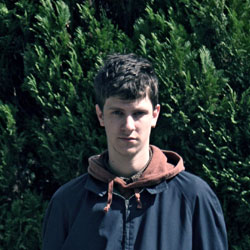 Jamie Treays’ debut album Panic Prevention has been a long time coming. A year ago the then 19-year-old Wimbledon resident was toting his acoustic bass at London’s tiny 12 Bar Club, off the alleyway colloquially known as Tin Pan Alley.

Since then the Wimbledon resident has released a slew of singles, headlined London’s Scala, toured the country, supported Damon Albarn‘s new band The Good, The Bad & The Queen at the reopened Roundhouse as part of the BBC’s Electric Proms and recorded with fellow Londoner Lily Allen.

Over a pint or two at a pub on London’s Tower Bridge Road, moments from the studio in which he’s been putting the finishing touches to his album, Jamie introduces himself. “My passport says Jamie; I’m one of the only real Jamies you’ll ever meet. Everyone else is some fucking cunt who’s nicknamed Jamie, but they’re really called James.”

Treays has a way with words and doesn’t shrink from peppering sentences with expletives. “I think the case is that I do what the fuck I like,” he says of his unique musical style, one that wears his punk influences very visibly. We get to talking about Lily, whose career launch his own mirrors. “Lily’s a friend of mine I met about a year ago,” he says. “I follow what she does; I think Lil’s got a lot of inspiration and she definitely does what she wants to do. And it happens that what she wants to do is very similar to what I want to do. I met her about a year ago at Notting Hill Arts Club; she knows a friend of mine. I didn’t actually know she was a musician then; I only found that out about six months ago.”

While Lily started her live career with a four-week residency at the NHAC, Jamie and his acoustic bass picked a similar timescale at the tiny 12 Bar on Denmark Street, a venue known for showcasing touring folk acts. “I used to play there when I was about 15,” he recalls, “and I like the venue.” It has a split level; audience downstairs get to see the lower half of standing performers, while upstairs are treated to their heads. “Yeah, it has a really weird vibe! I love it. When you’re an acoustic act you do it sitting down, but when you’re standing up it’s a bit harder – people are looking at your crotch.”

“I wouldn’t mind going to Cuba, before Fidel Castro dies.”
– Jamie T, from Wimbledon to Havana

In the last two-and-a-half years Jamie’s gigs have been performed with just acoustic bass and a microphone. Now he’s got a band together. “I want to make people dance a bit,” he says by way of justifying the expansion. “Acoustic acts are great when you can have silence, and you can shut people up.” He already knows a fair few of London’s music venues – establishments normally reserved for over-18s – and has words of praise for the Push Bar in Soho (now the Black Gardenia) and Kilburn’s venerable Luminaire. “I’ve been playing gigs for years. I’m lucky enough to be in a band with people who are all on the same page, but if it (came to orders) I’d have the last say. But it never comes to that; everything works quite smoothly.”

He’s become aware of one shortcoming on the live circuit, however. “The only problem you get with some venues is that the sound’s shit.” Why does that happen? “As soon as you’re in front of an audience, things get faster and louder,” he explains. “When you’re soundchecking you’re in an empty room playing to one bald guy who’s doing the sound. Know what I mean? If you’re in a large venue it’s even worse; the sound’s echoing off the walls when you’re soundchecking and then when you play to the crowd you don’t get the echo any more. And that’s why bands sound shit.” He pauses. “Either that or they’re shit bands.”

His gigs showcase music with which the word ‘raucous’ goes hand-in-glove. Take his best known track to date, Sheila, with its starkly memorable line “Sheila goes out with her mate Stella, pours it all over her fella”.

“I wrote Sheila a long time before I recorded it, as an acoustic bass song,” he says. “There’s no-one called Stella in it. It’s about a few different situations that I remember and I tried to put them all together and turn them into a story. Sheila’s a construct of different events and bits and pieces.” Referencing nights out in suburbia, it’s a document of every 20-year-old’s Friday on the town.

And not just his town. “I don’t just hang about in Wimbledon; I hang about anywhere. The songs aren’t about Wimbledon; they’re about anything and anywhere. I kind of believe that if you come from anywhere, the high street looks pretty much the same. You have a Yates. You have a Wetherspoons. And that applies to every city, every town I’ve been to.”

Wimbledon itself is better known for two weeks of tennis and for the wombles. “Remember when they brought the wombles back, about five years ago?” he asks. “It wasn’t half as good. I remember it from first time round.” As for the tennis, he doesn’t play. And his music is as far removed from strawberries and cream as it’s possible to get.

Which in one case could well be Salvador. That epic single “came from an eight-bar loop that we did quite quickly,” he says. We? “Yeah, me and Ben, who lives round where I live, he’s an old mate of mine.” He’s talking of Ben Bones. “He’s great with sound. Not production; sound. Compressors and shit like that. We almost produce it together, you know what I mean?”

Salvador, he says, was going to be called El Salvador, “but I couldn’t fit the ‘El’ into the lyric,” he laughs. And while he’s not been to El Salvador, “I wouldn’t mind going to Cuba, before Fidel Castro dies. A friend of mine went and recorded in Cuba about a month ago and told me that the problem is with the musicians over there that they’re all just so fantastic with their instruments.” How’s that a problem? “I’m asking the bassist to play four notes and he wants to play every scale that he knows that include those notes. And you feel like a cunt telling the guy he’s only got to play four notes because he’s so fucking fantastic at what he does. I suppose it’s better than having someone who has no fucking idea what they’re doing…”

“You have a Yates. You have a Wetherspoons. And that applies to every city, every town I’ve been to.”
– Jamie T, everyman

We get to talking about Cuba’s lauded Buena Vista Social Club and the late front man Ibrahim Ferrer‘s incredible energy in a live setting, which leads us on to talk about The Pogues; Treays is someone with plenty of respect for those who went before him. “Considering their age they’re still fucking good at what they do,” he says of Shane MacGowan’s troupe. “They still throw themselves around.” These two bands aside, he’s encyclopaedic on his other influences; Dexy’s Midnight Runners and The Clash are immediately referenced, “but there are a lot of really fucking good bands out there who I’ve nicked shit off and used it in my own stuff.” What does he nick? “The vibe. You take the vibe. You don’t nick the fucking bassline, know what I mean? You know that Raconteurs track? That’s fucking Joe Jackson‘s tune!” He sings it and starts beatboxing.

I ask him how he started recording. “I got a six-track off a mate of mine,” he recalls. “I pulled it out the other day actually. It’s fucked. But it was really good; I didn’t really know how to use it so you had to go round, like, in funny loops to get anywhere. But I think I got some of the best drum sounds I ever got with it, with one live mic. Since then I’ve tried micing up drums properly and it sounds like crap.”

Undeterred and with the help of Apple’s Logic, he’s persevered. “I’ve got about 80 tracks now; about 30 of them are around on the internet and shit.” And now he’s signed to Virgin on a five-album deal, it’s likely plenty of these will eventually see the light of day. Or maybe not. “I consider myself a one album kind of a guy,” he says coyly, “and then I’ll be sitting in here in the pub saying ‘I used to be a musician’.”

Before he can think of retiring, with those four singles done and dusted it’s time for the debut album to hit the shops. Is he looking forward to getting it out? “I’ve been sitting on it for a bit, making sure it’s good.” Earlier today he was rehearsing, but after our interview he’s heading back to the studio. “It’s pretty much done.”

He bats away a question about his expectations for his album’s commercial success with “I don’t give a fuck. I just want to be happy. I don’t want to be some fucking pop star. I just want to make some good music. So long as I’m releasing the music I want to release, I’m happy. Be truthful and do what you fucking do, you know what I mean?”