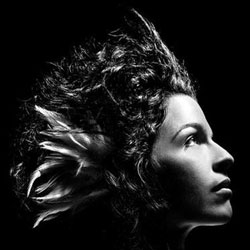 She knew it was going to happen. She was so certain of it, in fact, that she wrote about it in the opening line to Bed Across The Sea, on her second album Hunting My Dress – “LA is hot as fuck, Manchester is about to freeze”.

It’s a drizzly Friday afternoon, the night after one of her biggest shows to date, at Manchester’s Deaf Institute, and Hoop is in triumphant mood. “It was really great. I’ve played two terrible shows here before.”

Oh? “The worst was at The Night And Day about six months ago, before I put out the record. There were about five people there – some Elbow crew, my boyfriend and the bartender. It wasn’t a good night, but last night there were about 250 people, which feels good.”

“I love Elbow, but I just don’t get Oasis.”
– Jesca Hoop on the varied talents of her adopted home city’s music luminaries

It’s been a whirlwind 18 months for Hoop, which have seen her up sticks from LA for the sunny north of England, but she’s taken it in her stride. She hardly had the most ordinary of starts in life anyway. Born into a Mormon family in south California, as a child she sang traditional folk songs in four part harmonies with her siblings. She then took to the road, working in various jobs in the wilderness before taking a job as the live-in nanny for Tom Waits and Kathleen Brennan’s three children.

Waits famously provided her with a quote to use on her promotional material. It’s one that’s followed her around ever since. “The connection with Tom and Kathleen has been a real help and I’m so grateful for that. If people want to talk about that, that’s fine – it’s a part of my life and Tom and Kathleen have been so great to me. But the record company just used the end of it, and it makes me sad because it was such a beautiful quote,” said says. “Let me see if I can remember it all… I think he said: ‘Jesca Hoop’s music is like a four sided coin. She’s an old soul, like a good witch, a black pearl or a red moon. It’s like swimming in a lake at night.’ It’s so beautiful, but it’s been castrated!”

Waits wasn’t the only one to find something special in Hoop. Guy Garvey of Elbow is equally enchanted. After hearing one of her songs, Havoc In Heaven, on a mix-CD given to him by Leigh Watson of The Watson Twins, he was smitten. He tracked her down, interviewed her on his BBC 6Music radio show and, when his band were promoting The Seldom Seen Kid in the USA, they took her along with them. Fast forward 18 months and Garvey’s home town is also Jesca’s. Surely he’s not that much of an attraction? “Well, no. I fell in love with a Mancunian,” she admits.

Hunting My Dress was released in the UK at the end of last year – just in time to miss end-of-year lists – to rave reviews. An eccentric but well-polished album, it runs the gambit between blues and folk. It slips between being unnervingly dark to hum-along breezey, and paints pictures in the way few other records do. So it’s a relief to find out she didn’t write it while locked away in a studio.

“There was a house I lived in, in LA when I’d just signed a contract with Sony. They didn’t put me in a studio for about a year and I was living with a young woman in a similar situation. I had plenty of money in the bank so I spent the whole time writing, sitting under an oak tree. We spent a whole year in our comfortable clothes, our pyjamas, cooking and writing.”

She finished writing the album when she had moved downtown. “It was really different to where I’d lived before – along Skid Row, which was still over-run by homelessness. There were rows of tents in my block. I wrote the second half of the album in a stairwell, where it was really quiet. I definitely seek out environments to write in, so I’m not sure how moving here will effect my work – I’m going to start writing the third album soon, so I guess I’ll see then.”

She seems to be settling into life in Manchester, and has firm views on the city’s music scene (“I love Elbow but I just don’t get Oasis“) and is even picking up some of the local lingo. I point out that she referred to the Deaf Institute as a ‘well good venue’. “Yes! People don’t say that in LA. I’m always saying ‘well good’, I say ‘proper good’ as well. It’s not taken me very long to pick these things up.”

Hunting My Dress is set to be released in Europe and America in the coming months, so Jesca is consigned to the road for the next year. “The reaction in England to the record has been great – I’ve been waiting for this reaction! I’m not surprised by it in terms of ‘Oh my god, I can’t believe people like it’. It’s more that I know I like it, so it’s good to get that… confirmation. It’ll be exciting to see what sort of reaction it gets in Europe and the US.” And with such high profile fans urging her on, it’s surely only a matter of time before the record buying public follow suit.

Jesca Hoop’s album Hunting My Dress is out now through Last Laugh. She returns to the UK to play London’s Bush Hall in May.