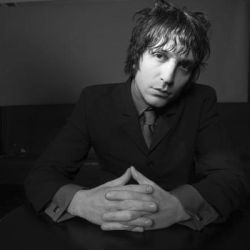 Jesse Malin has been making music for 27 years. Having made his name in New York punk band D-Generation, he is now about to release his third solo album, Glitter In The Gutter.

We caught up with him in London to discuss Myspace, Ryan Adams, LA and other irritations of the 21st century.

Okay, so he was feeling ill, it was the last night of the tour. I’d had minimal time to prepare.
There were sound checks going on all around us at the bar of the Islington Academy. He needed to go off and do his “vocal exercises” and he is naturally condescending to journalists. So it wasn’t an altogether productive experience interviewing Jesse Malin. All the rigid and rehashed answers came out, some interesting, many not, but it was understandable.

I came away thinking this man, who looks and sounds uncannily like Michael Imperioli (who plays the murderous, adulterous, alcoholic drug addict Christopher Moltisanti in The Sopranos) was a lovely fellow jaded by a tour that went as far as Glasgow and Dublin. But on stage later, he launched into a slightly bizarre rant against journalists.

Apparently, they often have the gall to ask him questions about, gasp, his new album. That one the whole point of the tour is to promote.

“I get so sick of all these journalists asking me the same questions,” he says. “I get so bored. Sometimes I just make up the answers – I end up saying The Fine Art of Self Destruction was about bungee jumping.”

Ah yes, Jesse’s 2002 debut. He went on to complain that journalists didn’t understand that the title of his album was in jest. No, Jesse, we got that. Perhaps you didn’t expect us to, or even want us to. His new album, Glitter In The Gutter sees him fuse his signature punk sound of his youth with the acoustic, more sensitive material of The Fine Art and its follow up, The Heat.

In leathers, with straggly black hair and a thick accent, every pore of Jesse Malin screams New York. After joining punks Heart Attack in 1980 as a 12-year-old, he went on to spend nine years in D-Generation before disbanding to launch a solo career that to date has met with much critical acclaim. It’s been three years since The Heat, and this mini tour was designed to give UK fans a taste of the new record, out in February.

“We’re alive and the clock is ticking. I don’t think ‘show-me-your-tits-disco-robot-disco-techno-bye-bye-LA-Myspace-assface’..”
– Jesse Malin.

“I really enjoy it here, ” he says. “People seem to dig music, they’re open-minded, they hate my president, they sing along and get involved. People are intelligent and there’s a great sense of humour. And good beer.”

For someone with such a suspicion of the trivialities that make up modern life (during the gig he attacks Myspace, iPods and Pete Doherty, as well as journalists) it’s no surprise he enjoys coming over to cynical old Blighty. Indeed, he’s beginning more and more to acknowledge a world outside New York, and admits that before Glitter In The Gutter he’d “never made a record outside 14th Street.” The new album was recorded in Los Angeles.

“I lost my apartment, I was thrown out, ” he says. “And the label was out there (in LA) and I figured they’d have homes, and I needed some good burritos and guacamole. I needed to get away.

“And it’s a ‘take action’ record, not a lonely-guy-heartbreak record. Form a band, fall in love, quit your job, create some artwork, listen to your heart, don’t believe what the government or the TV tells you. Try to take the road less travelled. It’s a defiant record, and I think has a little more angst than the other two. It reaches out of my local neighbourhood, to some of those people who might have voted for the wrong president and slaps them around a little bit.”

Jesse often goes off on these spiels of language, like he’s playing a game of word association with himself. It reminds me of that famous footage of a young Bob Dylan spouting spontaneous poetry in the street outside a pet shop, a homage to his beat poet heroes.

But Jesse is no Kerouac, and the amount of times, in the interview and on stage, that he repeats the phrase “Myspace-assface” as if its some example of his innate, literary sense of wordsmithery, make him seem slightly pretentious. Thank god his songs are so good.

Those songs are either aggressive punk rock with Jesse snarling like Paul Westerberg, one of his biggest influences, or more mellow acoustic balladeering. The latter style is one that critics and fans alike always put down to his association with great friend and collaborator Ryan Adams. He seemed really fucking sick of being asked about it.

“I love Ryan, he’s a great friend,” he says “Some journalists only want to talk to you about the other people they’re interested in, but I’m not some celebrity gossip hotline. These are my friends, so if it’s not offensive then I don’t mind talking about him musically. But if it’s a kind of gossip line of questioning then I get offended.”

I wasn’t going to pursue that, so turned discussion to the comparatively safe ground of his politics.

“You can either be disco-happy, forget everything and smile,” he says. “Or sing about real issues. What I tend to do is say ‘Okay things are kind of fucked up, and we’ll deal with that, but we’re also gonna have a good time,’ because we’re alive and the clock is ticking. I don’t think ‘show-me-your-tits-disco-robot-disco-techno-bye-bye-LA-Myspace-assface’. It’s a combination of having lyrics that are descriptive and that people can connect to on some level, about the daily frustrations of life.”

Before my head exploded with Jesse-isms, I wanted to know whether he saw himself as a punk rocker at heart or the fragile, melancholy, folky singer-songwriter.

“I’ve mellowed a bit, though I still like to take my pants off and roll around on the floor,” he says. “But to me everything’s the same. Whether it’s Bob Dylan with an acoustic guitar, Motorhead, Steve Earle, Pistols, to me its all punk rock. Charlie Parker, Johnny Cash, its all what you say and how you say it. Punk is folk, folk is punk. Life is punk, its how you walk and talk.”

Generally a good bloke, despite his tirade against the humble, pathetic journalist during his between-song banter. Next time, maybe I’ll ask him about his breakfast, Celebrity Big Brother or his favourite colour. Perhaps what type of animal he’d be.

Two factors redeem Jesse Malin. One, he really is a great songwriter and is a volcano of energy in a live setting, and two, he complimented me on my trousers. “Nice pants,” he said. But I was bored by then, and so was he.