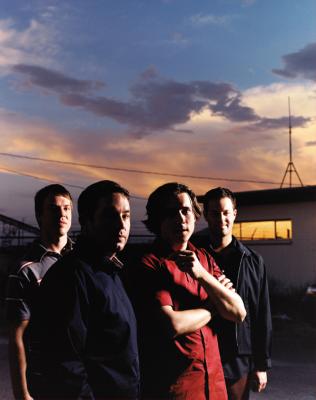 Jimmy Eat World have been around for 10 years but have spent the last four label-hopping and in 2000 self-funded their first tour of Europe. Now with new album Futures to promote, their first in three years, things are finally going steady. We caught up with guitarist Tom Linton during a flying visit to England to talk about the band, their new album, Bush and, erm… Boris.

Jimmy Eat World guitarist Tom Linton is in reflective mood after an exhaustive fly around Europe and the UK just weeks before their new album Futures is released. He looks tired, but is adament the band have enjoyed their brief sojourn to Blighty, which included a gig at the Islington Academy. “It’s been fun,” he tells musicOMH the following day. “It’s always good to play here for us and we’ve been looking forward to it for a while.”

They played four songs off the new album and Linton says they went down well with their fans – although they were careful to give the audience a thorough performance of their old favourites. He said: “They seemed to go down well. I have watched bands play all new songs, which is sometimes boring – you want them to play old songs the crowds are familiar with. But [from the internet] some of the kids have the new stuff and knew it.”

Futures is the band’s first album for three years and Linton, along with vocalist Jim Adkins, Rick Burch (bass) and Zach Lind (drums), claims it their best yet. “It’s different. It’s the best stuff that we have done so far. I think we spent a lot of time on it- we had a lot of time to try different things and experiment.

“They seemed to go down well. I have watched bands play all new songs, which is sometimes boring – you want them to play old songs the crowds are familiar with.”
– Jimmy Eat World guitarist Tom Linton speaks of playing their older stuff at the Islington Academy the night before.

“The last record was stripped down; this one’s a lot more thought out, rockier. But there’s also stuff on there that are in between – some really slow songs. It’s less poppy.”There’s songs on the album, one’s called Night Drive, that are some of the most interesting songs we’ve ever done. ”

And there’s more guitar solos, something Linton says he pushed for: “There’s a lot more guitar, definitely a lot more intricate guitar parts and stuff like that. It makes it fun to break it up, even the keyboard parts, figuring out a way to play it on the guitar.”

They’ve also teamed up with a new producer, Gil Norton of The Pixies and Foo Fighters fame. “It kind of changed things,” reveals Linton. “The sound and and the song structure – and he had a lot of really good ideas. When you listen to his stuff, like on The Pixies, there’s a really good arrangement to the songs – perfect.”

At this point Linton interrupts the interview. He’s been glancing at my chest from time to time and just has to ask. “Who’s Boris?” he enquires, nodding towards my printed t-shirt emblazoned with Mr Johnson’s face. “A band?”

“Er no,” I reply, a tad embarrassed, and try to explain he’s a fop-haired, toff-nosed Tory politician – the Rt Honourable Member for Henley nonetheless. Not that I’m a young Conservative, you understand. Or a card-carrying Labour or Lib Dem. I just like the t-shirt. Indeed, I’m ashamedly apolitical at the moment.

Which is something that Jimmy Eat World aren’t. They’re taking a huge interest in the upcoming American Presidential elections, will be emphatically voting Kerry – NOT Bush. They’ve even contributed a song to Future Soundtrack for America, a compilation put together by the political activist organisation MoveOn.org with literary journal McSweeney’s and indie label Barsuk.

Explains Linton: ” We gave a song called Game of Pricks by Guided by Voices. There’s a lot of good bands on there like REM and Bright Eyes. It’s going to raise money to raise people’s awareness about the election.

“I’m voting Kerry. Bush? It’s crazy – he’s ahead in the polls but hopefully won’t win. A lot of bands and people in the States know that right now it’s something you can’t ignore – what’s going on in the world.”

If the album and subsequent New Year tour go as well as they hope it could be hard to ignore what’s going on with Jimmy Eat World too.