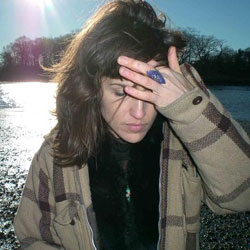 There’s something different about the energy, the dynamics of this encounter. Different. As in, unusual.

For starters, Joan Wasser is holding a camcorder and is asking me questions. I’m being interviewed. “Do you believe in God?” says the voice from behind the lens.

Wasser is not your average interviewee. And a brief glance at her CV to date reveals she’s very far from an average anything.

As has been written too many times to count, violinist and pianist Wasser played as part of Antony And The Johnsons and in Rufus Wainwright‘s band. She’s worked with Lou Reed and Elton John. The late Jeff Buckley was her boyfriend when he drowned in 1997; he wrote a song for her entitled Everybody Here Wants You.

Fast forward 11 years and, having unveiled her second album under the Joan As Police Woman moniker, To Survive, Joan Wasser is still only in her 30s. Even first thing in the morning, as we sit down to what will transpire to be a singular interviewing experience, she wears it well for a lady who’s done a lot and shows no signs of slowing down. It soon turns out that she has extra-sensory perceptions too.

To Survive is, she says, a record about her mother’s illness – cancer – and subsequent death in 2006. I tell her I’m sorry to hear her mother died. “Did your mom die recently?” she quizzes, suddenly and startlingly. Yes, I say, slightly unnerved, just over a year ago too. “I’m sorry. I could tell,” she nods, intuitively. If we were in one of those group therapy sessions Chuck Palahniuk would have us believe Americans indulge in, we’d probably hug at this point.

“I make songs to help myself deal with huge emotions,” she sighs. “And that’s one of the biggest things that’s going to happen in one’s life. I feel thankful I have that outlet because it’s hard to really process that amount of feeling… It’s huge.” Why songs though, rather than, say, screaming? “The way for me to feel better about anything, when you feel helpless, which is sometimes why it’s hard to deal with huge emotions, and huge things, is to communicate. I try to just get it out there even though it’s painful, because I know in the long run it’ll help it be less so.”

She’s made me wonder why I haven’t written an album about how I feel. The conflicting, surging emotions of horror, anger, ineptitude, desolation and crushing, overwhelming sadness that come with the turf are wind to the sails of songwriters, indeed artists of whatever discipline. Not for the first time, Wasser has me thinking, despite the early hour and the lack of caffeine. As her song Furious repeatedly asks, “Are you not furious?” Well, yes, I am. Thank you for asking, Joan.

From the same album, the title track, she says, “is about my mum, spoken from my mum’s point of view, in my mum’s voice. It’s about her singing a lullaby to me when I’m young, being scared of going to sleep, and then her leaving the room, and just being in her head and thinking that she has the same fears I do, and fears don’t really change. You just learn to deal with them as an adult, to face them. So you’re not just bawling every time you leave your house.”

I ask her how this album differs from the first from the point of view of her personal journey. “I’m still the same person. I’m still the searcher, looking for the same thing, which is, ways to be, to live on this planet easier, find more joy. Be lighter,” she says. “That’s always there. I think it’s similarly themed. It’s about love and it’s about death and I guess there’s a little bit more concentration on my frustration with the US government and just the way politics works in general, which horrifies me no end.”

Her debut album Real Life featured a co-written duet with Antony, Eternal Flame – a sign-off to Buckley. This time round, Rufus joins her on To America. “I wrote this song for Rufus and I to sing,” she explains. “I really wanted it to be operatic because Rufus loves opera, so I wrote it in that way.” They shared political concerns about the direction in which the USA was heading; Wainwright’s last album tackled similar issues in To A Town. But To America is also allegorical. “That song is also about my mom and her battle with cancer, and the way cancer is just relentless and has no feelings. It just attacks until it’s won. I used America as a symbol for one’s mother,” she continues. “The fact is I feel like my country has a disease. In world politics my country is blatantly, obviously not a democracy any more.”

“You just learn to deal with fears as an adult, to face them. So you’re not just bawling every time you leave your house.” – Joan Wasser

She accepts responsibility for how her material is received. “I am continuing to try to be more honest. When you keep an eye on that kind of stuff you do have the ability to get better at it and to be more courageous about expressing yourself. There are a lot of lyrics on the record that, when I originally wrote them, I felt like I really couldn’t include them because they were too revealing. But, you know, I then realised that if I felt any hesitation about putting them on the record that probably means they’re the most important lyrics.”

She begins with the music and adds lyrics after: “A lot of the time there may be something on my mind, and I may not even know what it is, but it’ll be something that’s pressing, or that I’m unresolved about, and I’ll make some music and words will come from that. So in a certain way the idea’s there in my head even though I may not have words for it yet. The music comes from that, but they’re nameless words. It feels like a combination, but the music usually comes first.”

I want to know what – or who – was on her mind when she wrote Real Life’s stand-out track, Christobel, a paean to a beneficiary of unrequited love with a gender-ambiguous name. “The person does exist,” teases Joan, “and Christobel is not their real name. It’s renamed to cover the suspect. It was like a feeling I had about someone I was seeing… unattainability.” She backtracks a little. “It’s more about me than anyone else.”

Another standout from her new record is Hard White Wall, a lovely combination of keyboards and guitar weaving a spell around her voice. But it’s explained away easier. “It’s about getting nasty with someone up against the wall. That’s all!”

Whatever shade the wall, Wasser can on occasion feel as though her back’s against it. “London’s terrifying,” she says. “If you have the favour of people they love you and if not… well, they couldn’t care less.” But London loves her, surely? “OH! Yeah, they love me! It’s fine, everything’s great!” She’d played a show the night before. “It was just the first show I’ve played in ages and anywhere would have been… you know… scary.”

“I’m not famous yet – or ever – so the attention I do get is fairly mild compared to some of the people I know.” – Joan Wasser

Her show saw her carry some technical problems. She says she’s gotten better at dealing with such trifling matters. “I don’t think there would ever be a time when it wouldn’t affect me at all. You expect your car to work. But when it doesn’t, you have to deal with it.” She considers. “I could have a tantrum on the stage, but that’s not really my style…”

Is she being stopped in the street? How’s she dealing with being recognised? “Parts of it (being known) are great fun and parts of it are not, but I’m not famous yet – or ever – so the attention I do get is fairly mild compared to some of the people I know.” Such as Buckley, the late Elliott Smith and her recent collaborators Rufus and Antony, I deduce? She nods. “It’s a strange place to be because I’m a very confessional person in my music and otherwise, in interviews or whatever, I just like to talk about what’s going on.”

This much we’ve noticed. “I’m not good at privacy,” she declares. “It’s a learning experience for me about how much to reveal. I don’t ever feel like I should ever limit, but I will probably have to learn that I do.” Why? “It’s really rare that you find the crazies. Most people are just interested. But every once in a while you come across that person that is not connected to reality like the rest of us are. Or is differently connected to reality! So you’ve got to keep a watch out for that.”

They’re just finding their own way to survive, perhaps. And with an album called To Survive, Wasser would know a thing or two about that. “We’re all surviving, we’re all breathing still, we’re all getting enough to eat, we’re all sheltered. But survival is more than that as human beings, because we have consciousness,” she muses. “It’s learning how to be more responsible and more respectful. And furthering evolution. Which sometimes seems to be about turning round and running in the opposite direction.”

After we’ve stopped recording, Wasser reaches under the table and grabs a video camera, explaining that she interviews her interviewers. Suddenly her comment about opposite directions takes on a new meaning as I consider what my face will look like on film after very little sleep, framed by a bad haircut, lit by a flourescent tube and unpepped by coffee. Oh, what the hell. “Do you believe in God?” she asks. If God exists, maybe she’s a woman. But that’s another interview.

Joan As Police Woman’s second album To Survive is out now through Reveal Records. Tour dates and further information can be found here.