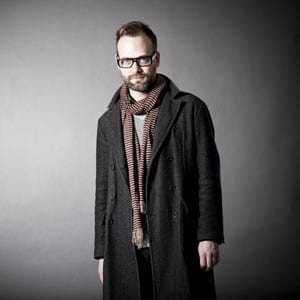 In a basement under Spitalfields Market, Joby Talbot is tripping over things.

Small wonder. His new contemporary classical project, Billiardman, is about to perform its first ever gig.
An assortment of media hacks, A&R types and anyone else who will listen have squeezed in to the east London venue, and notices on the doors indicate the gig to be sold out. The pressure is on. As he drops his bag, scattering papers everywhere, his ‘phone starts ringing.

Fellow member of the The Divine Comedy, percussionist Rob Farrer, is rather calmer. He settles down to introduce the people and the concept. Three members of The Divine Comedy (the third being guitarist Ivor Talbot), Martin Elliott of The Michael Nyman Band on bass and assorted others make up Billiardman, and the music they play is, according to Joby, “five minute mini symphonies for band”. How did Billiardman form?

Joby tells us that he had been meaning to attempt to take classical composition into a band format for ages. “I talked about it with Rob for three years, came up with the name and put zero effort into doing anything about it until The Great Lakes Festival asked us to play.” It was at this point that he thought he’d better get something together. Rob picks up the story. “The drummer was in the Steve Martin Band with me and in Goya Dress (a jazz outfit). The bassist, Martin Elliott, is from The Michael Nyman Band; and another member is a schoolfriend of Joby’s.” The Divine Comedy collaborated with Michael Nyman at the 1997 Flux Festival in Edinburgh, Joby meeting up with the composer again in 1999 for his Portrait evening at the Almeida Theatre; this goes some way to explaining Elliott’s presence. As the rehearsal period for Billiardman’s music was to be three days (The Divine Comedy more typically take five weeks), as Rob says, they had to have “fantastic musicians who are able to read music.” He immediately qualifies the remark by pointing out that, although Ivor can’t read music, “he’s really creative with the guitar, has lots of ideas and picks up things fast.” However for the rhythm section, the ability to read music was paramount.

While Rob is calmly chatting about all this, Joby’s ‘phone is periodically going off again, but now he comes back in and picks up the conversation instantly. I’d been wondering if the formation of Billiardman, around the end of the Fin de Siecle period for The Divine Comedy, was a reaction to Neil Hannon’s change of musical direction; away from Joby’s contemporary classical world and into a more rock-like format. “That might be slightly part of the reason,” Joby hedges. Although Neil’s last album, Regeneration, “was a lot of fun to do, it did not quite challenge me as much as the previous ones did,” and despite the change of recording technique from “Neil does a demo and gives it to me to a more egalitarian set-up… it is still about him and not about me.”

Rob seeks to clarify; “We would have formed Billiardman whether we were in The Divine Comedy or not.” Joby concludes the subject; “After about the first ten gigs you can play The Divine Comedy’s music in your sleep… so you need to make sure you do what you need to do, fulfil yourself rather than just working for someone else.” Joby is keen on expanding egalitarianism further. “I want Billiardman to be a larger scale thing, a loose thing, where everyone can write; I want to have a whole contemporary classical repertoire.” Noble words; but at present it is open to charges of being a side project of The Divine Comedy. “I always thought of The Divine Comedy as my side project,” he half-jokes, before mentioning that he is still writing pieces for other acts, such as this evening’s support act The Duke Quartet.

Why the name Billiardman, I wonder? Joby tells a story. “The name was thought up by David Sefton, the man behind the Meltdown Festival and our collaboration with Michael Nyman. He got it from an old photo of a colonial British officer in the Raj surrounded by all his servants. All of them looked pretty smart but one stood out – this amazing Seikh guy with a fearsome moustache and impressive turban. He looked like some kind of ancient god and was wearing a sash with ‘Billiardman’ on it.” Not your usual stock answer for how a band name was thought up, to say the least!

Despite 11 top 40 singles in the UK, The Divine Comedy’s live presence outside of the European Union has been, to say the least, rare. Fans in Australia, the USA and Canada have been wondering if the band have phobias about certain places. Picking one at random, I asked about any phobias concerning the United States of America. “We really want to go,” Joby enthuses. “We’d love to go; we’d like nothing more.” Rob cuts in, excusing with “It costs a lot of money; you have to have a really massive hit to make it work.”

Joby, defining frankness, cites a number of reasons for why the band have not been playing live in the USA for years (the last proper gigs involved Neil and Joby as a twosome only and took place in 1997). “There were times when we could have gone, but various shenanigans with record companies meant we didn’t.” It is perhaps a little early to ask if Billiardman expect to fly off to where The Divine Comedy do not go, considering that tonight’s gig is thus far the only one in the diary, but if The Divine Comedy’s next single, Perfect Lovesong, does well then perhaps the band’s new label will stump up some cash for a tour of the States.

“I always thought of The Divine Comedy
as my side project.”
– Joby Talbot

The whole band collaborated with German chanteuse and statuesque former Chicago! star Ute Lemper on her album Punishing Kiss. Was that satisfying; did they enjoy the experience? “NO! – YES!,” says Rob, precipitating much merriment. “It could have been so good and showed so much potential,” he laments. Joby continues, “It was a challenge to make some of these dodgy songs sound good, but Fin de Siecle had been done and then the best of album (A Secret History) came out and we weren’t really doing anything. You can’t just sit around for eight months doing nothing.” I wondered if they’d want to work with Ute again. “We would do it again – but with another artist,” Joby states, leaving no doubt about his level of enthusiasm for Ms Lemper.

Despite being stressed about his new band’s debut gig, Joby is amiable and easy to relate to. Rob, too, is charming to the last, when asked how he’d like to be remembered. “For being part of two fantastically successful bands – and for being the greatest footballer that ever lived, had he chosen that career course!” he says, chuckling. Joby answers the same question with something rather unexpected. “To be remembered at all would be fantastic,” he says, in all seriousness.

Joby Talbot could be remembered as the writer of the theme music for The League of Gentlemen, for his score for the Ivor Novello classic The Lodger and mumerous other films, for winning BBC Young Musician of the Year 1996, for his string arrangements for Travis and others, not forgetting being an intrinsic member of a band called The Divine Comedy, the husband of an increasingly successful artist – Claire Burbridge – and as the founder of a groundbreaking contemporary classical band called Billiardman. Not a bad start to eternal fame.