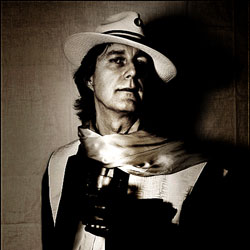 Down a very leafy lane in Pembrokeshire, not far from the sea, there’s a 1970s time capsule of a house – cork walls, white brick spiral staircase, deep red bathroom – the works.

Dominating the main staircase is a superb, larger-than life portrait of the current incumbent, John Howard, painted by friend Paul Brason, then unknown.

It’s a fitting house for John Howard, his actor partner Neil and their four assorted cats.

You could say that John is the perfect inhabitant, having launched his musical career with Kid In A Big World in 1975, only to find that singer-songwriters were no longer in vogue, and to have that career suspended almost before it began.

Now, unexpectedly, it’s been revived, and the signs are good that this time John’s talents will be given the recognition they deserve. The lush vegetation surrounding the house cocoons it from the outside world, and the silence is broken only by chiming clocks and the sound of John composing again for the first time in more than 20 years, seated at the piano.

His new album, As I Was Saying, is full of very personal songs that have obviously been gestating for years. “Listening to the ’70s recordings for the first time in years, it got me thinking about those times. My mother died in 1974, just before Goodbye Suzie came out as a single, and I’d left home a year before. It was that mindset of looking back… I’d started to write again and the songs that came out were the thoughts and reflections of that time.”

“I’d started to write again and the songs that came out were the thoughts and reflections of that time.”
– John Howard

We’re lucky to have it at all – there’s definitely a serendipitous quality to John’s new career.

“Kid In A Big World was released in February 1975, launched at the Purcell Room, but then sank without trace. No radio play (Goodbye Suzie was banned by the BBC for being too depressing; Family Man for being anti-female…), and within a couple of months it was as if it had never happened.”

John had already begun work on a new album – Technicolour Biography – that had to wait another 29 years before release.

There were singles, including a handful with Trevor Horn – “I Can Breathe Again got played on Radio 1, and actually beat Diana Ross in the listeners chart – it came second and she came third. So there you go, Diana!” John leans his long frame back in his chair and his mellifluous laugh fills the room – not for the first time. For a long-time “failure”, he’s a remarkably laid back, balanced and thoroughly likable man, with absolutely no side. “I also found out recently that Goodbye Suzie got to number 23 in the Radio Luxembourg PowerPlay chart, so I had a Top 30 hit after all”, he smiles.

“I Can Breathe Again beat Diana Ross in the listeners chart – it came second and she came third. So there you go, Diana!”
– John Howard

By 1982 however these small victories weren’t enough: he’d lost heart, and started a (highly successful) career in licensing and A&R instead. And then in 2000…

“I got an email from a chap in Australia saying, ‘I found your LP in a rare record shop, and I love it to death and I’m playing it to all my friends.’ And I thought, God, somebody likes the album, how marvelous! Then Steve Levine (Culture Club‘s producer) said, ‘have you seen the book In Search of the Lost Record. It’s on sale at Tate Modern and it features Kid as one of the classic albums of the ’70s.’ And then I went on the Internet and found it was being discussed, and people were saying ‘is he dead?’ and ‘what does he look like now?’ and so on…” The rest is fast becoming history.

Listening to John Howard now it’s easy to hear his roots in the North West (his voice has more than a hint of John Lennon, one of his heroes), his classical musical training and his early influences in the big sound he loves to produce. “It wasn’t just that I wanted to sing and to write, I actually wanted to record. That was the time Strawberry Fields Forever came out, and the production on that record made me think yes! this is what I want to do. And of course I desperately wanted to be star.” Another of those lovely laughs…

“And then I went on the Internet and found (the album) was being discussed, and people were saying ‘is he dead?'”
– John Howard

“The Beatles were a huge influence, but it was the sound of the records, not particularly the songs. By the time of I Feel Fine in 1964, the sound was massive – multitracked harmonies, John and Paul singing double-tracked together… then on Juke Box Jury in 1967 Strawberry Fields came on, with that lovely opening on the melotron, and that was it. I went out and bought all the old albums and became a Beatles fanatic overnight.”

Experiments with recording at home and at art college – “I took my tape recorder in and told them it was liberal studies” – eventually led him to London and his meeting with Stuart Reid, then head of the pop division of Chappell Music. “That was the first real studio, in Hanover Square. During the Kid sessions I was recording Gone Away when Peter Bown, the engineer, came on the mic and said, ‘do you know that’s the melotron John Lennon used to record Strawberry Fields?’ Talk about intimidation!”

Now, John Howard tends to be labelled ‘glam’. “When Kid came out, glam had gone. Bowie was doing Young Americans, disco was taking off, Bolan was really finished… glam influenced me and I loved it, but I never considered myself a glam artist. Maybe glamorous. I believe you should dress up for your public, to look good if you’re going to be seen. Joan Crawford used to believe that – she’d never be seen in her curlers. And neither would I,” he says with an arch look and a big grin.

“Glam influenced me and I loved it, but I never considered myself a glam artist.
Maybe glamorous.”
– John Howard

“When you look at it glam was Bacofoil outfits, it was Gary Glitter, it was Marc Bolan with tinsel on his face. It was very tenuous. Ziggy Stardust was the more credible side of glam, and Aladdin Sane was its pinnacle. I never thought I could do it – I was a true hippy, hair down to my bum (his early heroes were Sonny and Cher). But Stuart (Reed, now his manager) thought I had the figure and the bone structure for it, so we went to Biba and Herbie Frogg and I was ‘outfitted’. I remember thinking good God, I feel about 17 feet tall in this stuff… it was almost Noel Coward but with ’70s sensibility.”

John’s lyrics are more Northern grit. “I just love telling stories.” And now there are more stories pouring out. Will we wait another 30 years for the next album after this one?

“God, I hope not. I’ve just demo’d another 11 songs – much more objective, some of them quite surreal. These wouldn’t have fitted on As I Was Saying, which is stuff I needed to get out of my system – though I didn’t realise that at the time.”

As the new album is definitely the best so far, this bodes well indeed. And if there is any justice in this world, John Howard will finally become a star. It certainly couldn’t happen to a nicer man.