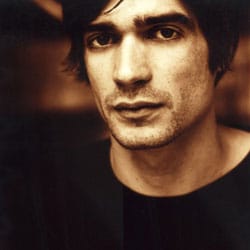 The advance of 21st century recording media means it has never been easier to make an album in double quick time. Jon Hopkins is fully aware of that, but when we hook up to talk about his latest work with Kenny Anderson, aka King Creosote, Diamond Mine, we speak of a work that has had many years’ gestation.

The two met, musically at least, when Hopkins added his producer’s brush to Bombshell, King Creosote’s final piece of work in his contract for 679 Recordings, but they already had previous by then. “I met him properly in Fife,” says Hopkins, “but we first met when I went to a King Creosote gig at the ICA. I went blundering up to him after the gig and said what a fan I was. He doesn’t remember that though! I said could he give me a phone call about a possible remix – I was quite young at the time. You certainly wouldn’t go up to an artist and ask for a remix normally, but it worked, and I ended up working on The Vice Like Gist Of It”.

The roots of Diamond Mine go back almost that far. “It was an attempt to catch him in his back yard, a visitor’s guide that’s how I saw it,” he explains. “I first went up seven to eight years ago to Home Game, the Fence Collective festival in Fife, and saw the people and the place. When you’re up for a festival you spend the weekend drunk, stumbling home at 8 in the morning, and it’s all about those moments. Diamond Mine started off being based around those things, falling asleep on a beach or something”.

The work has an improvised character, revealed in the pair’s method of catching field recordings to go with the King Creosote songs, plucked from Anderson’s back catalogue. “Wherever I plan or think ahead it will never work, and what I have in my head never happens. To start with I was going to go up to the harbour and get the sails rattling in the wind, but when I listened back to it all I could hear was the wind! That was written off, but then we went back to Kilrenny church, and people were having tea, and I got us driving, with a few outdoor bits. We could get the sound of the stream, and then Kenny gave me a few recordings of gulls and things, and the whole cassette sound made it more intimate and Fence-like. Most of it was just: record wherever you are, or even by accident – I didn’t know when I’d recorded the car indicator, for instance!”

“Most of it was just: record wherever you are, or even by accident – I didn’t know when I’d recorded the car indicator, for instance!”
– Jon Hopkins

He talks affectionately of the songs, which are clearly a labour of love for both. “Bubble is possibly my favourite one,” he admits. “Kenny had released it as part of an album called King Creosote Says Buy The Bazouki Hair Oil, and I thought it would be a dream to redo it.” In more general reference to Diamond Mine, he says, “there is no relevance to any time. It’s like a piece of antique furniture; it works in its own world. Straight away it’s not in a rush to grab your attention, the aim is for it to lull you in to its world. There is that emotional quality too.”

Despite the wish for simplicity, some of the elements of Diamond Mine are intricate and complicated – chief among them Anderson’s vocals. “You realise how complex his singing style is when you get someone to try and copy it,” says Hopkins, and Lisa (Lindley Jones, the extra vocal presence on the album) was harmonising, and the tiny details are complex, the inflections he puts in his phrases.”

When we talk Hopkins is finalising preparation for the pair’s UK tour, and he speaks of “overambitious work until crazy hours, which makes the trip fun. I’m working on B-sides at the moment, to go on the EPs that are to go out with Diamond Mine. We’re using the same method that has gone into the album, and again it’s various songs of his I’ve always loved. When I hear songs like that we’d add them to the list, so to speak”.

The satisfaction is far greater than for their work on Bombshell. “That was the first album I’d produced,” he remembers. “We had all this pressure to make something popular, and I’m not sure it was ever going to be the case. It was so precise, but now we’re making something incredibly pure, just King Creosote undiluted.”

Hopkins has a finger in several musical pies, and admits to working on new Coldplay material, without going into great detail about it. “Every week has different things, but Diamond Mine has been an escapist thing for me. If I want to do an electronic album I want to play it live, but with this one I wanted to put the vocals in a dreamy place.”

Also on Hopkins’ agenda of late has been work with Brian Eno, and a strong contribution to the Small Craft On A Milk Sea album. “That was more electronic and improvised,” he remembers, “just the three of us in a room. I had keyboards and effects processors, and the tracks were done in a couple of weeks.” He finishes by paying tribute to the legendary producer. “Over the years I’ve got an amazing amount from him, and he always makes sure you’re having fun. He goes out of the habit of making sure you don’t go mental with edits. My early albums had a lot of edits but I stopped working like that when I met him, and now I let things breathe a lot more.”

King Creosote and Jon Hopkins’ album Diamond Mine is out now through Domino. They play London’s Union Chapel on 25 May 2011.