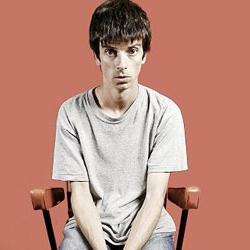 As a creative venture, Jonny completely reflects the spirit and personality of its two members, the Teenage Fanclub front man Norman Blake and the former Gorky’s Zygotic Mynci vocalist and songwriter Euros Childs. They now have a self-titled album to show for their efforts in the recording studio, which reflect a near-instant musical chemistry.

When we speak to Childs about the experience, he is just off the back of a launch gig at the Water Rats in London. Naturally, that seems a good place to start.

musicOMH: How did the gig go?
Euros Childs: It was really good. We played for about an hour, and had a few problems with the drum machine at one point but overall it went really well. It wasn’t the first gig I’ve done with Norman, obviously, but the first one we’ve done billed as Jonny.

OMH: You first met Norman in a live environment. Have you always enjoyed a strong chemistry with him on stage?
EC: Yes, that’s about the size of it. I got to know him in about 1997 when my old band Gorky’s was supporting Teenage Fanclub. He then came on tour with us as part of Monkey 2000, where we were a seven piece, and he sang a bit and played guitar. It was a little weird in a way, as with Gorky’s we had a lot of members, and only did three or four gigs together. He was really easy to get on with though, and is a very funny man. It’s not like I’m touring with Van Morrison or anything!

OMH: When did you first think it would be a good idea to make music with him?
EC: Again it was about three to four years ago, soon after we met. We made an EP together, and that is where the songs The goodnight, Bread and I Want To Be Around You came from. Candyfloss, too, was from that session. It was pretty obvious from doing that we worked well together. There was then quite a long period of time where various things got in the way, and I’ve been busy with a few albums. The nice thing about it was there was no timescale. We knew we could release it in ten years or ten days if we wanted, and finally signed the contract towards the end of last year.

OMH: Judging by the music, recording the album seems to have been a happy experience.
EC:Yeah, it was uncomplicated. We just gave the songs to Stuart Kidd and Dave Morgan, who make up the rest of the band with us. They came in to the studio, and we put the record down with live vocals. We worked hard, but at the same time we didn’t go back and re-tweak at any point. That’s a danger with technology when you have it at your fingertips, but you can still use the old fashioned approach with human traits! I think songs like Candyfloss lend themselves to this approach much more.

OMH: It seems from the point of view of the record fan to be an especially good time to release an album like this, lightening the gloom of winter.
EC:That’s good; it’s nice to hear that. Other people argue it’s a shame it’s not coming out in the summer!

OMH: Are all the songs collaborative?
EC: Yeah, all the songs on the record are credited as Blake/Childs. I brought a few songs in that had been written already, but Norman added to them. It was a really fun process. With Gorky’s I was writing mostly on my own, so it was seeing what you could get out of it, but with this it’s a lot more 50/50.

OMH: Do the lyrics draw on personal experience for either of you, or are you sometimes just enjoying the word play in songs like Wich Is Wich?
EC: A bit of both, I think. That one’s just about conjuring up an image in your head, it doesn’t go much deeper. I had to write the lyrics out for the Japanese releases though, and it took me about an hour and half to decide wich wich was wich. I had to keep writing the verse, ‘wich wich, wich is wich, wich wich is wich, and by the end I was spelling ‘which’ with an ‘h’ and couldn’t work out if I got it right or not!

OMH: You’ve added some unpredictable elements to the songs too, especially the more psychedelic feel of something like Bread.
EC: Yes, though that all came naturally. I didn’t think any differently to the way I did when writing Waiting Around For You, we just added the synth harpsichord bit to give it a different sound. It doesn’t have the same theme as your average pop song though! If it was on an album about food then maybe it wouldn’t sound as different as it does.

OMH: Are you in a position at the moment where you just can’t help writing songs?
EC: Yeah, I write all the time, there’s no stopping the writing. The less gigs I do, the more I write, so recently I’ve been writing a lot. It’s good because if I want to make an album with a band in the studio I’ve got the songs for that. The only thing hindering me on that side is the money you need to record with a band.

OMH: What have you been listening to lately?
EC:I listen to a lot, but recently I’ve been digging out my knackered and scratched versions of David Bowie albums. Gilbert O’Sullivan too, he did a Q&A session in Jersey when I was there. I went to the local charity shop and got a load of his stuff.

OMH: Did you meet him?
EC:No, he was on stage; it was a short film and a documentary about him. I was over there doing a soundtrack for a film festival, with the song Nothing Rhymed.

OMH: Are you still busy on your own solo material, or do you want to carry on working with Norman?
EC: We have been talking about a second one, but I’m not sure exactly when that might happen. I think we’d be daft not to do it. If it didn’t flow as it did for the first record then it wouldn’t be too good, but that’s not likely to happen I think.

The first, self-titled Jonny album is out on 31st January 2011 through Turnstile. More about the album and their upcoming tour can be found at the Turnstile website. Interview questions were posed by Ben Hogwood.