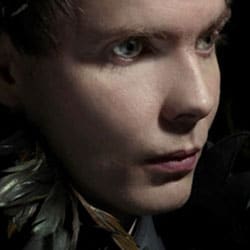 “Yun-see”. This is how one pronounces Jónsi, pet name of Jón Thór Birgisson, Sigur Rós front man and emerging solo artist. He is emphatically not “Jonsey”, the cat from Alien, even if his vocal style has oft been described as alienesque and his lyrics have, down the years, sometimes been written in languages not of this world.

It’s important to clear up such misconceptions. Else, if quoted more than once, they take up residence in the collective consciousness and become their very own truth. Another such factual inaccuracy is that, with the advent of Jónsi’s debut solo album Go, Sigur Rós have disbanded. Not quite so; while they have sold their swimming pool studio in Álafoss and are on hiatus, the rest of the band, whose track Hoppipolla is so beloved of BBC natural history programmes, are busy having babies, leaving Jónsi to eye a solitary spell in the spotlight. “I’m making my music babies,” he grins. “It seems like the babies are controlling something. A few years ago, the same thing happened; there was a Sigur Rós baby boom. It’s weird.”

A softly spoken, shy-sounding figure, Jónsi has his hair styled into what could be described as a fauxhawk or Hoxton fin, with a spike sticking up in the middle. A pastel cardigan snuggles round his slim frame, and he’s been supplied with coffee in a cardboard cup and a bar of organic fairtrade chocolate. “The cocoa beans are not roasted,” he says of the latter, conspiratorially. “It’s really powerful.”

His conversational style is quiet and thoughtful. He gives the impression of hearing words, pondering their meaning, then staring into space as he visualises their shape and the shapes of their letters, zoning out of what’s being said, and then finally zoning back in with something leftfield in reply. At times it’s as though he were floating between worlds, occasionally tuning in to interplanetary broadcasts.

As he prepares for a world tour, he’s feeling sanguine; this moment has long been coming. “We’ve been doing Sigur Rós for 16 years or something, and we do everything together. But in that time I’ve collected a shit load of songs, of my own stuff, at home.” The sudden splurge in mini-Sigurs has brought about a moment in time when it could be uncorked. “It’s time.”

As well as the Riceboy Sleeps album he made with his boyfriend Alex Somers and released in 2009, he’s also penned work on his own under the name Frakkur. “All that stuff was maybe more electronic and I never finished any of that,” he explains, “although some of that stuff is out. I always have a lot of projects. But Go is the first project I’ve finished on my own.”

It comprises material that’s built up over many years, “from different time periods,” he says, explaining that the output that became Go “was only the acoustic section. I started 20-30 songs and scaled it down to 13, I think. I recorded them, but there’s only nine on the album. One of them is 10 years old. But some are really young; (written) just before I went into the studio.”

They hang together as an album, despite the considerable time period covering their gestation, and make up arguably his most accessible work to date. “I think it’s so much about arrangement. When they go into the studio they get the same atmosphere, the same feeling, the same players, the same recording process. It glues them together.”

The man brandishing the studio glue was Nico Muhly, who has worked in a similar capacity with Owen Pallett, Grizzly Bear and Antony And The Johnsons, among others. “I’ve not known him long at all,” says Jónsi. “We’d never met properly until just recently. But I heard one of his albums and really liked his arrangements, so I asked if he’d be interested and he was, and it went from there. He arranged everything; all the strings, brass; and then played nearly all the piano.”

Ah yes; strings and brass. Rumour had it that it was, at its inception, meant to become an acoustic album. “I’ll strip it all down when I get older. Like Leonard Cohen,” he jests, nibbling a chunk of chocolate.

Go’s bouncy songs are written almost entirely in English; a surprise in itself, as Sigur Rós have hitherto released just one English language track. Why the change? “My boyfriend is American and we speak so much English now in Iceland at home,” he explains. “And as I’ve only sung one song in English with Sigur Rós, I’ve never really written lyrics in English before. It was a good challenge, a good experience to try it out. I’m kind of really into lyrics now, I think it’s good for me. For so many years I was trying to avoid that. And I was lazy also. But (before) it was all about the music, writing good songs and music, and writing melodies.”

Not everything is in English, however; Go’s lead track Boy Lilikoi means… well, what, exactly? “Passion fruit,” he says, a little sheepishly. “I don’t know if it’s some fantasy in my head, some dream boy who lives wild in nature, in the jungle or something. Lilikoi comes from Hawaii, when we were there mixing the Riceboy Sleeps album; that was the first time I’d heard the word, living in this paradise, in the heart of a jungle and surrounded by fruit trees; avocado, macadamia trees. It was this tiny hut with solar power, with one big lead from the community into our hut, and I just had one laptop and two speakers.”

As locations for mixing an album go, Hawaii evidently has its charms. “We decided we could just go somewhere to mix (the Riceboy Sleeps) album, because we could; we just needed a laptop and two speakers, so let’s not do it in a kitchen! We decided to go somewhere sunny. February in Iceland is amazingly depressing and cold and dark all the time. So it was the perfect time to go away.”

“Me and Alex have this side project called Olympic Boys, which is like gay techno…” – Jónsi

The “we” in all of this is of course Alex Somers. “We met five or six years ago maybe,” Jónsi recalls. “I was touring, in Boston, and he was in Berkeley Music School. His brother came up to me before the show and gave me a CD with his music on. Sometimes you get given CDs, and usually they’re not really good, but I listened to it and it was actually really good. After the show we met and had a drink, and Alex was with him, and… how do you say? It was… love at first sight.” Like the Kylie song? “Exactly,” he grins.

“But I totally decided he was straight. We had a really nice night, with just a few drinks, and afterwards I jumped on the bus to the next gig.” That might well have been the end of it. “But six months later, or one year later, I came back to Boston to play another show, and I called his brother – we had been in touch about music – and then we decided to have a drink. We connected really well together, and were together from then. We have really similar taste in nearly everything. Some bands he likes I don’t like. But nearly everything we have exactly the same opinions on.” Somers contributes artwork to Sigur Rós – the cover design of the Takk album is his – and he’s one of the band on Go. Riceboy Sleeps appears to have cemented a solid partnership.

“Me and Alex have this side project called Olympic Boys, which is like gay techno,” he confides, giggling. “It would be good to find some gay remixers, you know, and make pure gay anthems, like Ibiza songs. Really cheesy.” He’s already travelled a short way along this road, appearing on Tiësto‘s most recent album Kaleidoscope after it transpired the superstar Dutch DJ is a big Sigur Rós fan. “He asked if I wanted to sing on a song, sent me the song, and it was actually alright. But he’d sent me only the first part, before the beat things happened, so I thought, ‘Ooh, that’s different; there’s no beat! Cool!'” But the finished version of course has one. “I would love to do more things like this,” he says. “People tend to think Sigur Rós are really serious people and take us really seriously, so it’s kind of nice to turn that on its head.”

Jónsi’s debut solo album Go is out now through Parlophone. Following USA and UK dates he tours Europe, Australia and Japan through summer, returning to the UK in September for Bestival and a series of regional dates. For full tour details head over to jonsi.com