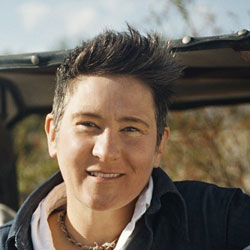 When k.d. lang was promoting her previous studio album, 2008’s Watershed, there was a sense of an artist reincarnated after her crazy period of 1990s fame had been followed by several quieter years. A protracted phase of writers’ block which she in part attributes to the introspection that accompanied her becoming a Buddhist – had seen her release several covers collections. Yet where that album of original material had seemed long in the making, her new celebratory collection Sing It Loud was “a breeze” to write and record.

“It was palpable the energy and magic in the air,” she says of the sessions where she and the band worked at an “astonishing” pace, completing the first eight songs in three days. A highly collaborative affair, this is the first time one of her albums has been credited as a k.d. lang and band’ record since her work with The Reclines. The band’s name The Siss Boom Bang came when her best friend happened to use the phrase to describe the sound as they kicked in on the first track. It’s also a term used to describe firework noises appropriate, as they recorded on the 4th of July weekend.

kd met the album’s co-producer and musical director Joe Pisapia backstage at her show at Nashville’s Ryman auditorium on the Watershed tour. They were introduced by a mutual friend, the Canadian sound engineer Gord Reddy, and immediately made a musical connection. Returning home from the tour, she contacted Joe, listened to his band Guster, and booked a flight to go and write with him at his studio. Her girlfriend apparently said “that’s so unlike you”, surprised at this impulsive decision from someone who tends not to do rash’, and then said, “I think its great, go for it!”

“It’s not worth it to have a successful career as someone else. I’d rather have a minimal career and be myself.”
– k.d. lang

They then brought in a group of carefully chosen musicians including Fred Eltringham of The Wallflowers, who she describes as “my favourite drummer I’ve ever sung with he leaves so much space”. They also rather magically both happened upon the same idea for a reworking of Constant Craving, lending it the feel of The Pretenders song Kid for a performance on Later… with Jools Holland.

Having previously admitted to drawing inspiration from the wilder chaotic times in her life, it’s interesting that this more settled k.d. lang, coming up to 10 years with her current partner, is still creatively incredibly fired up. “I made up my mind I can do whatever I want to do whenever I want in terms of art. There’s no rules.” She also describes some very distinct phases in her career. “In the beginning there was the country stuff when I was exploring the whole package of performing. I was very kinetic and pushed my voice as far as I could push it. Then came the pop thing with Ingenue and I started letting go of the physical stuff and focusing on the voice. That continued with me really focusing on the subtleties of the voice and a more classic style of singing with the Tony Bennett stuff and Drag. And now I’m going back to country but also incorporating rock which I’ve never ventured into.”

Intriguingly she hints that she will probably “get glimpses” of what musical direction will come next “around halfway through this tour”. Though it’s something she never plans until the moment hits her. Current artists she’s enjoying include Fleet Foxes, Teddy Thompson, Arcade Fire and Jessica Lea Mayfield. Even though she started playing classical piano aged four, she admits to not enjoying music theory “because it’s too mathematical and disciplined and I’m not like that. My family were all very highly achieved in piano and I was the youngest, so I kind of disappointed”. Fortunately her teacher Sister Xavier suggested she try singing and enter a competition at a local festival which k.d. won, aged five. She has always worked instinctively and by ear since then.

She also says she feels free again to embrace her sexuality now that there’s less media frenzy surrounding it than back in 1992, when she posed for the cover of Vanity Fair with Cindy Crawford. “On this album I’m fairly butch, which is fun. I always try to balance it so if the focus is really on my sexuality I’ll pull way away from it and when people aren’t paying attention to it I’ll smack you in the face with it.” She certainly doesn’t regret coming out when she did, even saying that Ingenue was a bigger hit because of it. “It’s not worth it to have a successful career as someone else. I’d rather have a minimal career and be myself.”

k.d. lang & The Siss Boom Bang’s album Sing It Loud is out now through Nonesuch. She tours the UK from 30th May 2011, including two dates at London’s Royal Festival Hall on 2nd and 3rd June.