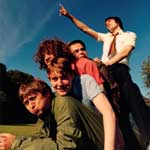 Leeds combo Kaiser Chiefs are hotly tipped in 2005 to “do a Franz” and make the big leap to stardom. Debut album Employment made it into the Top 5 on the back of the hit single I Predict A Riot – and as predictions go, it’s been spot-on.

The Kaisers’ sound, rather than being filled with synths or edgy Gang of Four guitar riffs that seem to be all the rage at the moment – just ask The Bravery and Bloc Party – owes much more of a debt to the Britpop golden age of 1995.

If you’re not yet familiar with them, their songs are built around simple structures and big, catchy hooks – think Blur, Supergrass and The Kinks. They’ve certainly found a niche in the market.

As far as the band’s origins are concerned, bassist Simon Rix informs me that the Kaiser Chiefs formed in Leeds about two years ago, more a less as a group of good friends and acquaintances.

“We’ve known each other for a long time, me and Nick the drummer and Peanut who’s the keyboard player went to school together. We met the other two when we were older, going to clubs and stuff.”

The band got their name from a football team in South Africa – the former club of Leeds United captain Lucas Radebe. So are the band members big fans of the game? “Not all of us – I’m quite a big fan of Leeds United and a couple of us are, but it’s just because we liked the name as well.”

“I think we’ve got some good songs…”
– The Kaisers demonstrate their confidence.

The band’s first major release, the offensively catchy I Predict A Riot, hit the airwaves last autumn. The response to this was greater than they could ever have imagined, it has been their trademark tune over the last few months and also the catalyst for most of their success to date. Has their rapid rise to stardom (in indie terms) surprised them at all?

“No, I think we’ve got some good songs. Everyone seems to be enjoying it – we started our tour yesterday, all the gigs are sold out and everybody seems to be going mental.”

Simon goes on to say how the band are happy and relieved that the album has been received as well as it has been – they didn’t just want to known as that band who did I Predict A Riot. “We’re very pleased with the reaction to Oh My God (their last single) because at previous gigs… everyone loved I Predict A Riot but didn’t really know us as a set. But now the album’s out everyone knows the words to the rest of it and they sing all the way through!”

Incidentally, their mammoth 19-date UK tour has seen upgraded venues in every city bar one. “The gig tomorrow at the Rescue Rooms (in Nottingham) is the only gig in England that didn’t get upgraded – all the rest of them we were playing small rooms and now we’re playing big rooms like Glasgow Barrowlands, Birmingham Academy and two dates at the Astoria (in London). It’s exciting!”

Lending support to them on some of the dates are a couple of bands from their hometown of Leeds, The Cribs and Duels, who Simon informs me are both brilliant and worthy of your attention.

“We took Damon Albarn to see Graham Coxon! He was a very nice man…”
– The Kaisers mix it up with some influential Essex boys.

“We’ve got two bands from around where we live that we think are great – we really love The Cribs, they’re a great band, and then Duels who are unsigned, they’re kind of our friends – they’re really good. They’re getting quite a lot of interest, so hopefully the tour will be good for them and they’ll get signed.”

Not content with creating a frenzy here in Britain alone, the band have been generating a bit of a buzz in the States lately – I Predict A Riot has become something of a radio staple over there, allegedly, and they recently took part in the annual South by South West music convention in Texas – something of a Mecca for new rock bands. It was here they got to meet the one of their big inspirations, a man who they can thank for their very existence as a band.

“We took Damon Albarn to see Graham Coxon! He was a very nice man. We said sorry for stealing all of his songs and ideas – he said that’s exactly what he said to David Bowie, and it’s just a thing that gets passed on! We met him in a bar and he came to our gig the next day, we hung out – it was good, it was fun.”

The band also run an indie club night in Leeds called Pigs, which Simon can’t recommend enough. “It’s really good, we set it up because there were no club nights in Leeds that we wanted to go to anymore – there were all sorts of indie nights that weren’t good. It’s an indie disco but we play more kind of new wave and a lot of things you don’t get elsewhere!”

If you’ve listened to the Kaiser Chiefs, their huge popularity at the moment will not come as too much of a surprise. Like The Killers before them, they’re not afraid of making pop songs with big choruses that appeal to a wide audience. They may not the most original or serious band around, but they certainly don’t claim to be either. They’re just here to put a smile on your face, make you jump around and have a good time.

But if you didn’t manage to get a ticket for the Kaisers’ current tour, fear not – they’re likely to be around for a good while yet.