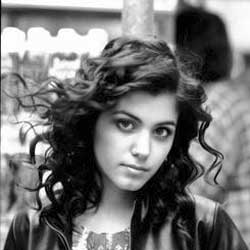 Eighteen months ago, Katie Melua was a common or garden student doing a BTEC and A-Level in Music. Then, along came composer Mike Batt – once a man who wore a Womble suit but in more recent times Midas composer for everyone from Art Garfunkel to Vanessa Mae.

Songs were written, Wogan and Parkinson became fans and so, it seems, did the rest of Britain…

musicOMH met up with Ms Melua, as she prepared for her assault on the Christmas charts with a triple-header download single, to find out what it’s like being the best-selling artist in Britain at the age of just 20.

That Katie Melua is young is obvious from the moment you meet her entourage of public relations and management people. Towards the end of a day where she has been called upon to do multiple interviews and radio sessions, her team are unanimously “knackered” while the spritely Melua is showing no signs of flagging. “I blame it on her age,” says one person with a hint of envy.

Upon meeting Ms Melua, it becomes clear that there is indeed much to be envious of. Dressed in jeans and a multicoloured woollen fleece, with her tanned complexion, coiled dark hair and larger-than-life eyes, the ickle starlet is one of those lucky few who look even more attractive in real life than their already impressive publicity shots.

Of course, even supermodels had their not-so-glamorous teenage phases, and Katie is understandably horrified at the prospect of her performances on ITV’s Stars Up Their Nose at the age of 15 being wheeled out in “before they were famous” fashion:

“I bloody hope not! I’d cringe my arse off! It was a kids’ TV programme. I didn’t really take it that seriously – I just wanted a bedroom makeover really, and that’s what I won, which was great… I suppose it would be funny for everyone to see. I’d laugh at it – you can’t not laugh at yourself.”

It is this happy-go-lucky, carefree attitude that has, perhaps, enabled Katie, along with the likes of Jamie Cullum to take the previously “serious” genre of jazz into more people’s homes. Katie believes that reality TV has inadvertently helped them in this regard:

“Pop Idol and Fame Academy have really highlighted to the mainstream public how much music is manufactured. I think people wanted something different, something with melody and interesting lyrics by artists who are musicians. People like me and Jamie and Norah (Jones) and Amy Winehouse – it’s sad to say – but people like us have always been around but the timing was right for us to go into the mainstream because that’s what the public wanted and needed.”

With Katie mentioning fellow young star Amy Winehouse, I have my opening to ask her about some rather unflattering remarks made by Ms W in these very pages a few months ago. These went along the lines of, “I’m a songwriter but she (Katie Melua) has her songs written for her… She must think it’s her f**king lucky day… It’s not like she’s singing old songs like Jamie (Cullum), she’s singing s**t new songs that her manager writes for her.”

“It’s very funny to have the courage to say that in the music industry, although I don’t know if it’s foolish or if it’s good on her part.” – Katie Melua’s diplomatic response to being called “s**t” by fellow jazz star, Amy Winehouse.

Katie is visibly surprised at the vehemence of these insults, but is amazingly balanced and gracious in her response:

“First of all, music is so much about opinion and she is completely entitled to her opinion. I think it’s hilarious, actually. You know, it’s very funny to have the courage to say that in the music industry, although I don’t know if it’s foolish or if it’s good on her part.”

“But obviously I have to defend myself. She’s absolutely right – the first album is not about me as a writer, it’s about me as a performer. I met up with Mike and he had these great songs. She might think his songs are s**t, I think they’re f**king brilliant… I love his songs, I love singing his songs. His songs make me sing a certain way.”

“And he didn’t write all of the album. There are some great old tunes on it like Crawling Up A Hill and Lilac Wine – one of the greatest songs ever written – and there are two songs of my own, and they weren’t songs that I co-wrote with some producer, they’re songs that I wrote myself about me.”

With such a diplomatic and measured response, it comes as no surprise to learn that when Katie was younger she dreamed of being a politician rather than a musician. World issues are still close to her heart, as she explains while discussing her contribution to the new Band Aid 20 charity single:

“It was just an amazing thing to be a part of… Politicians can ignore marches. Millions of people came out before the Iraq war and they ignored those. They can ignore people’s letters. But they can’t ignore a million-selling record, they really can’t… Last time Band Aid raised 144 million but Africa has to pay that amount back every week to the World Bank and rich countries. That’s ridiculous.”

“Last time Band Aid raised 144 million but Africa has to pay that amount back every week to the World Bank and rich countries. That’s ridiculous.” – Katie Melua on the importance of the new Band Aid single.

Being a part of the 21st Century Band Aid is just one of a catalogue of achivements for Katie Melua this year. She’s sold nigh on two million records, sold out The Royal Albert Hall, had the Queen telling her that she’s a fan and even played at The Kremlin – something particularly significant for someone who spent the first eight years of her life growing up in Georgia, in what was then the USSR.

However, it seems that Katie is still a music fan at heart, for none of these things are her highlight of 2004:

“When I did the US tour back in June I performed at the same venue that Eva Cassidy had regularly played at (Birchmere, Washington DC). That was really very special for me personally because she, more than anyone, inspired my first album and inspired the song I wrote, through which I met Mike. So that was definitely the highlight.”

No doubt the late Ms Cassidy would have been proud at having influenced another like-minded Songbird.