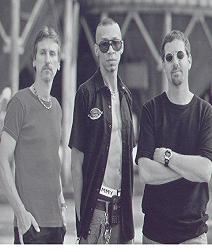 Sometimes Lady Justice gets all moody and sticks a podgy middle finger up to the world. How else are we to explain the fact that veteran Texan trio King’s X were a massive influence on the likes of Pearl Jam, Soundgarden and Alice In Chains and yet never sold millions of records themselves? Still, it seems that in every nation there is a smattering of devoted, faithful followers.

Not only do they buy King’s X albums, but they grab the various solo and side project records that bassist/vocalist Doug Pinnick, guitarist Ty Tabor and drummer Jerry Gaskill keep themselves busy with too.

musicOMH caught up with Doug and Jerry (who’s just released his first solo album) on a recent trip to London to discuss the true meaning of “success”.

Jerry Gaskill is eyeing me very suspiciously. It seems that he can’t quite believe that I am here to interview him. The reason? I’ve come from a prior engagement and am dressed to the nines with a posh shirt, cuff-links and everything. It’s ironic how rock ‘n’ roll is one of the few professions where you get judged negatively for looking smart…

A few muddled explanations later and we’re ready to go. King’s X have been together as a band for 23 years now and have been releasing albums since 1987 – have all the solo records and side projects with the likes of Dream Theater, Trouble and Pearl Jam helped them to survive longer?

“I think they have definitely helped us live longer. Side projects are often the things that sustain us financially and we all have to make a little bit of money. Just to release and get that music out of us and to go in different directions, I think in many ways brought us closer as a band.”

“Different directions”? Jerry’s new solo album, Come Somewhere is certainly “different” to King’s X, with only fleeting nods to their hard rock backbone but a strong leaning towards their psychedelic pop side. Jerry is understandably proud of it, all the same:

“I never know how to describe my own music… It’s kind of very beautiful, it’s very melodic, heavy at times… It’s really cool… Everybody should buy it!” (Laughs.)

“If I sung about drugs or I painted myself up like Marilyn Manson we could probably be successful for a little while.” – King’s X frontman Doug Pinnick refuses to compromise for the sake of record sales.

After a bit more chit-chat, the tall, thin and infeasibly young-looking figure of Doug Pinnick emerges, clutching a copy of a rock magazine.

“Look who is on the cover, why does he take his shirt off like he thinks he’s hot?” Doug asks. “He’s just not in shape to do it – he needs to do push-ups for a month!”

“Maybe he wants to show off his tattoos,” proffers Jerry.

Or maybe he’s just standing up for the common man, I suggest – sarcastically. Doug seems taken by this idea:

“Exactly! That’s a beautiful thing, you know, because we (King’s X) ARE the common men.

“He must be doing something right ‘cos we’re sat here talking about him,” Jerry semi-chastises.

I put it to them that the likes of Limp Bizkit and especially Marilyn Manson have had success more through their image than via their music. Doug agrees:

“Oh yeah… but I still have to give them credit for that… Like Madonna – I don’t think she has any talent at all, but she sure knows how to sell herself and because of that she’s a Number One star… If I sung about drugs or I painted myself up like Marilyn Manson we could probably be successful for a little while too. Look at Slipknot, you know.”

“We’ve never been called ‘has-beens’ because we never made it!” – King’s X frontman Doug Pinnick obviously knows how to find a silver lining in every cloud.

So has he never been tempted to try?

“For me it’s not honest. To those people, that’s what they are, that’s what they want to do. I would just feel like I was a big fake up there and I want people to listen to the music we make because of who we are and not because of some image we’ve made up… (Laughing) I guess that explains our lack of success!”

That “lack of success” is one of life’s great unsolved mysteries. Doug explains that there was a time in the mid-’90s when this state of affairs really riled him:

“When our Dogman record came out (1993), I was very angry. I was angry because grunge had become huge and I know that some of the bands from the Seattle area really loved King’s X and were inspired by King’s X… but we were ignored. And I know that we don’t sound exactly like those grunge bands but… the drop D guitar tuning and the melodies and the harmonies – we inspired them.

“I heard some of those bands on demos before they heard us and they sounded nothing like when their records came out. They did listen to us but we got no credit for it. But that’s life. I was kinda upset about it at the time…”

These days, however, the band seem much more at ease. The truth is that few bands have as loyal a fanbase as King’s X – something that the band clearly appreciate, as Jerry explains:

“We’re just making music that we enjoy… Apparently there are a few people around the world who tap into that and they love it. And those who love King’s X really love King’s X. And either you love King’s X or you’ve never heard of King’s X.”

“We realise that we are very lucky because almost all of the bands that started out when we did are gone, no matter how many records they sold. They’re over, but we’re still here making music. We still have respect and we have never been called ‘has-beens’ because we never made it!”

“We are the perpetual underdogs and we’re championed for it. Our fans are like Grateful Dead fans – they will buy every record that comes out and they will come to see us play regardless of the climate. And no matter how bad ticket sales are for other bands, we will still sell the same amount.”

Long may it continue…