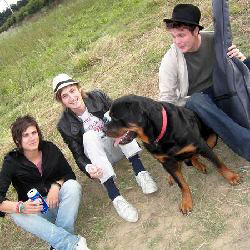 London based good time rock ‘n’ rollers and recent stars of Club OMH Kingsize are a hybrid of the best parts of your record collection.

Mixing the urgency and grit of modern collectives like The Libertines and Razorlight with the pop sensibilities of bands of yesteryear like The Kinks, The Beatles and The Clash, they create a hugely raw, rocking and tuneful noise that’s just waiting to soundtrack your lives.
With regular airplay on Virgin Radio, constant gigging in the capital and a debut single due out at the end of the summer, we thought it was high time to catch up with the band to see how it all began, what we can expect from them and where it’s all going.

So, how did it all begin? Such was the question I put to the band, sat at the bar at Nottingham’s legendary Social before their recent headline slot there. Mike McCartney, vocalist, guitarist and songsmith, explains:

“George (drums) and I came to Nottingham Uni, and met in Art History of all places. We started playing as a two piece, and Joe the bass player was at Nottingham as well – I knew him from a long time back, so we roped him in.”

After gigging as a two, and then a three piece for a while, the line-up was bolstered further earlier this year with the recruitment of lead guitarist Zanny Ali, who was drafted in to beef up the sound. “I went to school with Zanny, and we got him in about four months ago,” explains Mike.

And was coming into an established band at a relatively late stage a challenge at all? “It’s alright,” says Zanny. “Mike kind of lets me do what I want, musically that is! Every now and then he says take a solo, it’s pretty easy.”

They go on to explain their reasons and motives to form and start playing together in the first place: “I’d already had quite a few songs together, and all of us had been in bands before of various natures,” advises Mike. “George and I were chatting about music, and we realised we liked all the same music, so that’s how it came about.”

Be it raw ambition or flailing academic grades, the band subsequently ventured back down south to their native London, deciding to give to give it a real, sustained push.

“We realised our courses weren’t doing too well,” George admits. “So we thought lets go down to London and do it properly. By that stage we had about seven or eight really good songs down.”

These songs of which they speak are splendidly unpolished, catchy and remarkably energetic slices of rock ‘n’ roll, a sound that has been influenced by all sorts, they say.

On comparisons to contemporary outfits like The Libertines, Razorlight, The Cribs and Kings Of Leon, to name but a few, they’re quick to agree: “That’s the medium we quite like, it’s got that gritty underground sound but it’s very poppy as well,” exclaims George.

Says Mike on influences: “There’s new and old stuff. Libertines, Razorlight, and just the classics – Beatles…” “I think musically we’re closer to our older influences than these recent bands we’re associated with,” interjects Zanny. “Like The Kinks and The Beatles, and all that 60s stuff.”

“If we don’t get one through a record label, we’re going to do it ourselves”
– On their planned forthcoming debut single.

“There’s Clash in there as well, from my perspective,” Mike adds, after some thought. Zanny continues: “They’re one of my favourite bands, certainly. I try to throw in a bit of Mick Jones!” he chuckles.

And what do they actually sing about? What can we as listeners expect to get out of a Kingsize song? “They’re all about personal experiences, there’s nothing too abstract or political. All the stuff was initially written as poems, and then translated,” explains Mike.

“The Daze is just about being with your mates, and just having a laugh for a whole summer – we were all together, and we all went off in different directions,” he goes on to say. “It’s personal, but you have to generalise your lyrics a bit otherwise no one would get them.”

The response to all this has been remarkably positive, too. A recent gig in Bristol witnessed the MySpace effect in tangible terms: “A lot of the people knew the two or three main songs, and it was good to see stuff getting out there through the Internet. People are downloading it, and we’re getting a lot of hits every day,” George enthuses.

Elsewhere, Virgin Radio’s The Edge Rock Show happened to be at an early London gig, and liked what they saw so much the band were invited to do an acoustic session for the station, not to mention their flagship track The Daze being named as the song to look out for in 2006. They’re hoping to use this momentum to secure a record deal, and put out a single.

“There’s no pretence to it. We haven’t got any sound effects, we don’t use any pedals, we just play!”
– On how they stand out from the current Libertines copyists.

“We’re trying to get a single released by the end of the summer,” Mike reveals. However, if they don’t manage to get signed, this isn’t going to stop them – especially in light of bands like Clap Your Hands Say Yeah and iForward, Russia!, amongst others, taking on the industry on their own accord in recent months: “If we don’t get one through a record label, we’re going to do it ourselves,” he adds affirmatively.

But hold on, hold on. Why the hell do we need another lo-fi rock ‘n’ roll band from London? Don’t they spring up every other week? What are this bunch actually bringing to our speakers that we haven’t heard before?

Mike tackles the query head on: “The Libertines movement that happened a few years ago brought a return to The Clash sound, with a bit of energy – we’re a sort of more pumped up version of that – it’s a bit more rocking to be honest.”

“It’s honest rock ‘n’ roll, which I’m all for,” he emphasises. “There’s no pretence to it, we haven’t got any sound effects, we don’t use any pedals, we just play, and I think that’s quite different at the moment.”

“It’s the way it started, and it’s probably the way it’s going to be,” adds George. “And we love it dearly!” concludes Mike. And with such a firm belief in what they’re doing, not to mention a cannon of strong material, it’s surely only a matter of time before this sentiment goes public.