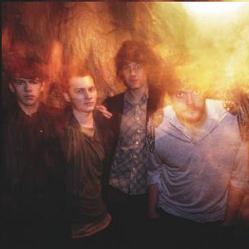 James Righton is standing in a garden, wearing his bowling suit. Dressed for action, he has stepped outside the Bloomsbury Bowling Lanes, where the band have assembled for a few choice strikes. As he says, it’s “better than a hotel room”. But is their second album Surfing The Void better than their Mercury-winning first?

It retains the directness of first album Myths Of The Near Future, a quality Righton confirms is no accident. “We knew what we wanted to do really, and it took us a while to get to that stage, but as soon as we did it was really easy. We wanted this record to be as relentless as the first one, in terms of not letting the listener go”.

The album took a while to make itself properly known. “We spent a lot of time talking about music, and thinking, and making very considered music, and then we stopped thinking and just did it. We didn’t say at any point, ‘oh, let’s just try and use this or that as a reference’, it was more like saying ‘let’s see what comes naturally when we pick up the instruments’. And that’s how all the songs were written.”

Eventually. Some of the James Ford-produced material they’d initially submitted to their label for inclusion on this album was supposedly rejected by Polydor. “Then when we met up with Ross (Robinson, the album’s eventual producer), we didn’t talk about music. He came to London and there was no sitting around talking about bands and stuff, it was ‘let’s make music and let’s record the music that you’ve written, and get the feeling of each song and make sure the takes are amazing. Let’s get the fire into the music, capturing a moment rather than being heavily reliant on computers and editing. So everything that’s put down there is real.'”

The band have been connected with John Foxx on several occasions, but they’ve yet to work with him. Was he ever in the frame to produce? “No”, says Righton, “but we’re massive fans of John Foxx and we just said we all loved him.” And yet they share a love of things from beyond the conventional. “Yeah, and when we started obviously JG Ballard had a massive influence on what we were doing, and the same was true with John Foxx. There is all that other worldly stuff, but this one is more about inner space rather than outer space, and it’s more personal rather than being driven by the edges of space and the cosmos.”

Included with Surfing The Void is a reading list. Should the music be experienced in the context of the suggested tomes? “I haven’t even read all those books,” he smiles. “Those are books Jamie was reading at the time that helped him to draw inspiration for the lyrics. They’re not used as directly as on the last record, they’re more of a help or an aid. They might just inspire some lyrical direction or thinking, but when we talk about the song I always like it not to be so defined in what it has to be. I enjoy music that is a little less obvious or direct in that way.”

Myths Of The Near Future, of course, won the Mercury Prize. Did that change the band’s collective thinking, or its modus operandi? “No, it just gave us a good reason to celebrate for a few months! It was an incredible thing to happen to us, and obviously the Mercurys are held in such high esteem it was a dream to win it. After winning it we just moved on, we don’t really sit around talking about the past. When we write we just try to let go of what we’re thinking and make good music. When we bring ideas in, the way we work is very democratic.”

Keen to stress the way the band works, he elaborates. “We bring the ideas in, and we’ve all got to be in to it before they get worked on, so that means there is always a level, a bar that we’re trying to reach. We keep our expectations really high, but that’s always within the band. None of these external things that have happened to us over the years ever penetrate that bubble, they don’t influence us.”

“We’re not intoxicated when we play, we have a quick drink before the gig and then we get off on playing”
– James Righton of Klaxons on introducing a little control to their live sets

But has the band dynamic altered at all between first and second albums? “Yeah I think it has,” he says emphatically, “in terms of when we made the first record there was a complete naivety, and none of us had any defined roles. It was just the three of us in a small room in Deptford, just making it up as we went along. We weren’t a band, even. I’d play bass on some songs, Jamie would play drums, and then we’d all switch and Simon would play guitar. It was never anything that defined, we had the ideas and the music came next. Over the last three years we toured so much that we became a band, and we work to our strengths now.”

What was the catalyst for their revised approach? “The main thing with changing the dynamics has been incorporating Steff into the band,” he says, “because we didn’t really have a drummer before. We’d be writing and it would make it difficult writing in the same room, and we wanted Steff to fit the style that we always have made, but also to have the freedom to do what comes naturally to him. Sorting that out took some time, and we could never properly do that with James Ford, because James was also our drummer, and so it got very complicated and we needed Ross to help incorporate Steff into the band, which he did.” The songwriting process has benefitted too. “Now we can write so much faster, because we know what we’re doing, and we’re all in the room playing together as a band. That’s still an amazing thing for us, because we weren’t really a band before.”

Can the dreaded ‘nu rave’ tag now be shaken off? “We’re not trying to shake it really,” he says with a touch of weariness in his voice, “it’s just a progression, you move on. We always get asked about it, but for us it doesn’t really embarrass us. For a while there were a lot of people who got really excited in something that was so small, but then exploded so that even people in high street chains were copying the look. It’s quite bizarre, the whole period, in an amazing way. As much as people criticise it I don’t think there is anything now that is exciting young people and kids as much.”

We move on to discuss any influences the band may have picked up between albums. He thinks for a little while before replying. “I think we’ve added colour to our music. We wanted, like any kind of change in music, to do something different. We didn’t want, when we started, to sound like one of those post-Libertines, ‘jingly jangly’ bands, you know? The Libertines were amazing, but a lot of bands in their wake were recycling, and it didn’t seem very fun – it was very grey and dull. I think we helped inject some of our colour and excitement into music at that time, and after our album I think a lot of bands tried to write music that had fun more, that was weirder and a bit more ‘psychy’ if you know what I mean.”

Does it help the band themselves to get into a chemically altered, ‘other worldly’ state when they’re playing? “When we play, Ross really helped us to achieve that ecstasy in terms of a non-chemical way, without having to play anything, playing together to create a feeling and an energy. We’re doing that better than we ever have done, and live especially, because Ross really made us believe in that type of music. Ever since we’ve worked with him we can feel music that’s ‘meant’, and honest, and good, from the heart rather than considered. When we play now we’re not thinking, we’re just having the best time ever, switching off our brains and doing what we do. It comes from that primal, instinctive way of approaching music, and we’re living in the moment, which is one of the things the record is about, embracing the now rather than projecting the past or the future on to the present.”

Has that approach made it more rewarding to play live? “When we were riding the wave of that first record we had only just started being a band, and we were having fun a lot of the time, so there were numerous times where we were just a bit slack or the other side of drunk, and we had cheap, crappy equipment. Having said that, it’s the way you should be when you’re starting a band, you don’t want to come out sounding like U2! We did what we had to do at the time, but now we have the experience and know how to do it. We’re not intoxicated when we play, we have a quick drink before the gig and then we get off on playing.”

Klaxons’ second album Surfing The Void is out now through Polydor, featuring the recent single Echoes. The band begin a tour of the UK on 11th November. Dates are listed on klaxons.net.