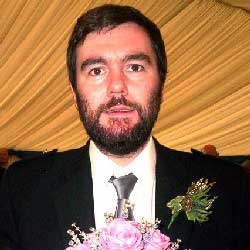 The dreaded side project. Many natural resources have been squandered servicing the moments when the spiritually unfulfilled members of the rhythm section decide it’s their moment to pull in a few favours from the record company. And so begins the downfall of western civilisation.

But enough about Genesis. When Aidan Moffatt was challenged to make a solo record by Arab Strap partner Malcolm Middleton, for once the results were worth the conceit.

A burly figure replete with Captain Nemo-style beard, Aidan resembles a kindly version of Popeye’s arch nemesis Bluto. Though unfortified with spinach, I cornered Aidan in a cocktail-dizzy Islington bar before the second night of an Arab Strap performance. The Falkirk-burr remains untainted by repeated international travel, at least to these sassenach ears:

“I just wanted to be taken a bit more seriously… Lucky Pierre seemed like a funny idea at the time. In retrospect it sounded like I was sex obsessed, you know… Lucky Pierre, Arab Strap, blah, blah, blah… so it was purely for that purpose. (Also) when I was in America I saw flyers for at least three other bands called Lucky Pierre.”

Despite what you may have read, Aidan Moffatt is the soul of conviviality and the diametric opposite of the man one writer referred to as being ‘always ready for an argument’. Though by no means a Methuselah, Aidan’s rawer edges may have been toned down by the steady approach of his thirtieth birthday. In the same piece, Aidan had stated a desire to ‘make the most depressing album ever’, something he’s now quick to disclaim: “That’s just me talking shit. I don’t want to make records to upset people”.

Like many Brits born in the early-to-mid ’70s, Aidan’s reference points reflect the collective experiences of the ‘E’ generation, the afterglow of which informs the sound of L Pierre. “It definitely changed people’s tastes” Aidan confirms in reference to that era’s titular drug of choice.

“Somebody printed a list of the worst places to go in the UK… most of them were in Scotland… it might have been Stenousemuir…”
– L Pierre on sources of inspiration.

“I mean I had a fucking good time. But it gets to the point where you ask yourself ‘I could just carry on doing this or I could do something else…’ I don’t believe things like ecstasy are that addictive in themselves, I think you get addicted to the lifestyle”.

Rather than the bits ‘n’ pieces approach that characterised the formation of the first Lucky Pierre album Hypnogagia, Touchpool was intended as a cohesive work. In many ways, it’s an unusual record. For the expediency of easy categorisation, the record hovers on some middle-brow level between ambient and chill-out, but with a buoyant charm that avoids either potential millstone.

Aidan takes up the subject. “It’s not that I think there’s anything bad about chill-out music. I think it’s that people are trying too hard – I guess it’s trying to appeal to people who are flat out fucked from working. I think there’s a certain element of lounge music (to L Pierre) as well. I like the idea of that sort of stuff. The idea is to try and take out the goofy parts and try and make it into something you can listen to without pissing yourself laughing!

“I suppose it’s (hankering) after a bygone era. The same concept of chill-out music. It’s just the different drugs that people have been taking.”

Though essentially the product of loops pilfered from charity shop records, with a small number of ‘live’ contributions (Aidan – “I’m not musically gifted in that way, it seemed like the most obvious thing to do, to use samples”)the music flows organically. Rather than Reich-ish repetitions of slowly unwinding harmonics, or Eno-esque excursions into the the ether of yore, much of Touchpool’s seven pieces make a sensory impact that is virtually floral.

Yet, this scents sensibility is a far cry from Touchpool’s actual inspiration. Like Rotspots From The Crap Map for example: “That was a headline in a Scottish newspaper” Aidan continues, “Somebody printed a list of the worst places to go in the UK and most of them were in Scotland… it might have been Stenousemuir (they were referring to)…”

Before this interview begins to sound like two pervy old men in a pub (well, more than sounds like) we turn the conversation around to the new L Pierre single that’s currently enlivening MTV2, the disco-fabulous I Hate T-Shirts That Say 1977.

Pitched somewhere between Graham Massey and Giorgio Moroder, this unabashed fling at the dance floor was cut from the same sessions that bore Touchpool. Featuring rapper Notes (Aidan: “He’s done some things with Melodic (L Pierre’s record label). He’s based out in Texas. Some people think its me trying to rap”), it’s not too much of a flight of fancy to imagine its ballroom strings sidling up to a Radio 1 playlist.

“I like a bit of disco, aye, I think it’s a nostalgic thing. I was only about five, but its something that I really remember”. Though no studio boffin, Aidan has a magpie eye for vintage synths, even if his girlfriend won’t let him buy anymore: “I’ve recently got (the same kind of synth that) Blondie used on Heart Of Glass” (actually a Roland JP 8000). “I’ve got so many…”

A drift towards the ultilisation of analogue sounds in recording (as much modern digital software will mimic the ‘fatter’ ‘warmer’ sound of pre-digital electronic instrumentation) is something Aidan has in common with a clutch of other practitioners of programmed mood music from Boom Bip, Four Tet to Brazilian svengali Apollo Nove.

It was inevitable that the subject would return to seedier subjects. Surrendering to the inevitable, I ask Aidan if, given his time again, he might have called himself something else from the euphemistic pages of Roger’s Profanisaurus, the glossary of smut compiled in homage to Viz Comic’s Roger Mellie “The Man On The Telly.”

Predictably though, Lucky Pierre trumps me.

“When I was in school, I was once given a birthday cake, and my friends wrote on it every word they could think of for ‘fanny’. One of my friends wrote Pleasure Enquiry Cavern. I think that was the best one. I think I would choose that.”