Ladyhawke: “I’m not in this to be a Hollywood star, I want to make the music” – Interview 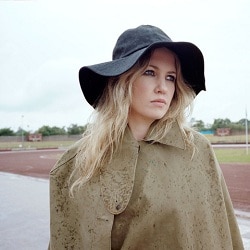 Ladyhawke is in town – not an uncommon statement where the UK is concerned, since she has become incredibly popular on British soil since the release of her self-titled first album in 2008. Now, four years on, she has an eagerly awaited sequel to promote, and she is doing so from the comfort of a caf in Shoreditch. “It’s like sitting in someone’s living room, this!” she coos, looking around her. “It’s really cool.”

From the outset it’s clear that Ladyhawke – or Pip Brown, her plainer everyday moniker – is going to be easy to talk to. She has an easy way with words and smiles a lot as she speaks.

All of which makes the title of her second album, Anxiety, more difficult to come to terms with. It’s a suggestive label, leading to questions of judgement over that supposed ‘difficult second album’. “Yeah, it was that,” she agrees. “It was all the things you go through, and those harmless things that people say to you in passing, like ‘when’s it coming out?’, or things about ‘the second album curse’. Because of that I got more nervous, anxious and stressed out while I was making it. It’s been finished quite a while now though.”

In a sense she now finds herself in the eye of the storm. “I’m in a kind of limbo, yeah, with promo and interviews, and the release date has been pushed back again, which is a bit annoying for me. I’m looking forward to it coming out though; it’ll make a nice change to tour some new material.” Ladyhawke tours have been snapped up quickly in the UK of late, which Brown modestly addresses. “It’s really exciting and mind blowing, and selling two nights at KOKO was such a surprise, and a bit of a mind rush.”

The anxiety has yielded a different, much bigger sound for the second album. “Yeah, it’s definitely more your basic drums-bass-guitar album,” she confirms, “and I paid attention to guitar distortion and stuff, because I wanted to get it a certain way. At times while I was making it I had a whole variety of records inspiring me, but in particular artists like Joan Jett and David Bowie. I’m very proud of the material and the songs. I wouldn’t say confident, exactly, but I’m happy with them and excited by the album, and hopefully that’s translated into what other people think. After all, if I don’t like it then no-one else will!”

From the outset she knew making the second album would not be easy. “It was back in February 2010 when I started. I stupidly thought I could turn up and record the album, but I was so exhausted and kept falling asleep on the couch! When this happened a lot I decided to go to New Zealand, and I reconnected with people, and did what I needed to do.”

The album was recorded with producer Pascal Gabriel, which meant a switch between his studio in the south of France and recording in Brown’s home country of New Zealand. “My time was split between the two,” she recounts, “and I couldn’t really skip between them, so I would come home and have months off. I’m glad I stayed in New Zealand like that. I’m from Masterton, which is an hour and a half north of Wellington, but I lived in Auckland for a while when I was recording the album.”

“I’m not in this to be a Hollywood star; I want to make the music.” – Ladyhawke

She gets satisfaction from both stage and studio environments. “It’s funny, because on stage it is a case by case scenario, depending on the gig. Sometimes I might be really nervous and hating every minute while other times I vibe off the audience and have a great time. In the studio I love creating and making the music. It’s not too tiring, but I do beat myself up quite a lot. If it doesn’t sound quite right I stew for a long time, but working with Pascal he’s so relaxed that doesn’t become a problem, and it’s like you’re in someone’s living room. Both environments serve a purpose. Touring is a routine that I like – travelling, playing a gig, going to a hotel, getting up the next day and moving on. I’ve toured with the same people for four years, and it’s a brilliant way of getting to see new towns and cities.”

She confesses to not being so famous back in New Zealand, or at least, “not to the degree of over here. It’s quite funny how it happened really, because New Zealand all had to be slapped around the head with me to get through, and I’ve had the majority of success over here.”

Is she wary of getting the Lana Del Rey treatment at all, going through the critical wringer of the ‘build-em-up’ and ‘knock-em-down’ process? Does she wonder if she’s in the right business? “I always wonder if I’m in the right business,” she laughs. “I wonder if I should be an illustrator at all, but no. With Lana Del Rey I’ve listened to her album without knowing any of that part of her story, and I loved it. A friend of mine told me the whole story, but then with the whole indie world turning their backs on her that was odd. I liked her for her music so that’s how I can keep it.”

Has the way the press treat musicians changed, even in her short career? “I think it’s case by case really. You can have an interview with someone who genuinely wants to talk about stuff, or you come up with someone who wants to get a reaction out of you, and can make you upset. I’m not in this to be a Hollywood star; I want to make the music.” So if she wasn’t Ladyhawke, what would Pip Brown be doing? “If I wasn’t doing music, I did a bachelor of design majoring in photography and with a minor in digital video production, so I would hopefully be doing something with that. My dream when I was a kid was to be an animator for Pixar, but they don’t have those anymore. I would have gone somewhere with that. It’s a side of what’s come naturally to me. I was really good at woodwork and design technology when I was at school, and was a few years ahead at those subjects. I just love being creative and working with my hands. I haven’t done anything remotely arty in a long time, not since I’ve been Ladyhawke.”

But since she’s in music, which she obviously loves, “I’d like to be busy for however long this album lasts. If I can tour and play incredible shows that’s all I can ask for. And if it doesn’t do well then I’ll have to work off the previous record, come out and say, ‘Hey guys, remember this album?!'”

One question that we can’t resist asking before parting concerns Brown’s artwork, particularly the feline sketches she took for the release of Paris Is Burning, her biggest hit prior to this album. “I love cats,” she says affectionately, “and when I was a kid I was a cat and dog person. I had a grumpy, stroppy cat, it would jump up on my lap and scratch my face. It got so old, it lived to be 21, but it was an old senile shit of a cat! It was when it died that I realised I really liked them. I can’t have a cat now though, it would die of starvation!”

Ladyhawke’s Anxiety is out on 28 May 2012 through Island, featuring the single Black White & Blue. She begins a tour of the UK at Brighton’s Komedia on 23 April, winding up on 11 May at London’s Shepherds Bush Empire. More info and visuals at ladyhawkemusic.com