Laurie Anderson: “I am a big Obama fan, but he’s not the magic bullet that changes everything” – Interview 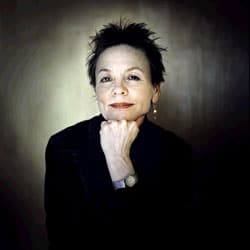 Homeland, Laurie Anderson‘s latest album, is her most political work for many years. In the fall-out of the Bush era, America’s international reputation remains at a low ebb – and, in person, she is just as critical of right-wing politics and big business as she is on record. But as anyone familiar with her albums or live shows will know, her impish sense of humour is never far below the surface.

Only An Expert is one of the highlights of Homeland, a playful yet scathing indictment of how Americans value the views of so-called experts over good old common sense; set to a driving techno beat.

“I wanted to be polemical, and a beat seemed like a good way to do that. I performed it first at a benefit event at the Lincoln Center, so I thought ‘here is a chance to be really insistent’ – in front of folk who had a lot of power. I thought ‘this is really going to be fun doing it here’. The beginning of the song [which takes a gentle pop at the banality of business culture] – well, I thought there’s no way anyone could be offended by that, but they were – this room full of experts. Some of them even started leaving the room. I thought ‘I’m onto something here’ so I started adding more and more verses to the song.”

Mischief aside, the messages within Homeland are often deadly serious. “Writing the album spanned the Bush and Obama years, and there was a lot of journalism in the work at the beginning. I was really angry with the fact that all of a sudden I was part of a country that tortured people – I thought ‘wait a second!’ I don’t get my self-image predominantly from being an American, but at the same time it’s really hard to avoid when even a bit of your self-image – a bit about where you live – is connected with something that horrible.”

How would things be different if Homeland was conceived now? “I guess I would make it more political.” More political? Even now that Bush has gone? “Well, usually the rule is when the right-wing is in I write about politics and when the left-wing is in I write something more like poetry. We swing every eight years, give or take – but these days we are swinging overall more to the right. I am a big Obama fan, but he’s not the magic bullet that changes everything. I’m doing some shows next week from Homeland, and I’ll add more verses to Only An Expert – about the BP disaster in the Gulf of Mexico, where you see the experts coming in and… doing very little.”

This implies that the world of politics reaches wider than the direct effects of politicians’ actions. “Yes – when I say I do things that are political, it’s more about urban techno-politics; it’s not just local or national politics. It’s so that people from other cities know what I’m talking about. When people in Hamburg hear Only An Expert they know what I’m talking about. It’s not the same situation, but the characters are the same: in a way that people in Tallahassee have no idea what I am talking about.”

“I am a big Obama fan, but he’s not the magic bullet that changes everything.”
– Laurie Anderson

Technology has been a subject of fascination for Laurie since her 1982 debut album Big Science, but what’s the link with urban politics? “Well, people who live with a lot of technology and media think in a different way to those who don’t. They question things in a different way. They’re more involved in the jump-cut – when you live with a lot of technology you’re jumping all over all of the time.

“This record is about that – you are jumping from topic to topic minute by minute, you are incredibly busy – not that that’s a super great way to be. You realise how you are not where you think you are. When you start listening and looking around where you are instead of living in a media culture, many things have disappeared – like in New York we have no more record stores at all, no more bookstores, we don’t have banks – a lot of the things where people would be socially put together are not there any more. You just download things into your house. It’s a different world. People are defining themselves through technology rather than geography.”

How does London compare to New York in terms of its urban politics? “The city I feel closest to is London, and I felt a lot of uneasiness in a similar way to New York when I was there a few weeks back. But maybe that was because it was election time. The difference, though, is the London sense of humour: I really appreciate that. New York is very humourless now. It’s kind of grim: everyone is a workaholic – even people who are going to parties are just grimly going to parties. Artists have turned their studios into a workplace: it’s scary. I’ve just felt a lighter sense in London, a willingness to see the silliness of things, the lightness of things. You’re not killing yourselves the way we are.”

Another key moment on Homeland is Another Day In America, a long, spoken-word piece which mixes personal recollections and political observations, drawing a line underneath America’s old way of conducting itself in the world. The way forward, though, is sketched out via questions rather than predictions or expressed desires. “I don’t know what the answers are. Even if I did I wouldn’t put them on a record. That’s one of the reasons this record is so full of questions and no answers. A theory can mostly be questions, that can still be a theory. Who knows what will happen? Who could say they have their finger on the pulse? I like to create things with no final meaning, because life is really messy.”

For Laurie Anderson, a manifesto for change doesn’t have to be a set of rules: it can just as effectively be drawn up by delving into memory; one’s own or those of fictional characters. The narrator of Another Day In America, a male alter-ego by the name of Fenway Bergamot, helps her achieve this. “Fenway is a character from Proust in a way. I didn’t know this when Lou [Reed, Anderson’s husband] thought up the name but Bergamot is apparently a kind of fruit that’s one of the memory-jiggering devices in Proust – but that’s good because Fenway is into memory in a lot of ways. So many of the songs are about memory. Originally I called him a voice of authority – an expert, if you like. He was this blowhard pontificating idiot, but then the last time I took him out of the box there was something melancholy in his voice. He can jump-cut from topic to topic more easily than my words: his mind is skittering all over the place. I like to replicate the way that thoughts move through you like that.”

Why choose a male alter-ego? “Well, audio drag is so much fun to do… but it also helps me create a narrator who’s about the furthest from what I am – not that I am a super-feminine person, I’m really not… but it was the farthest away from my voice. I just wanted to escape – as a writer I want to see things from another perspective. It really helps to not always see things from my own point of view.”

Her own point of view, though, is a refreshing one. She’s playful, inquisitive, and sees far enough below the surface to know that glib solutions don’t get us anywhere. Just tell that to those so-called experts.

Laurie Anderson’s album Homeland is out now through Nonesuch. For her latest tour dates and further information check laurieanderson.com