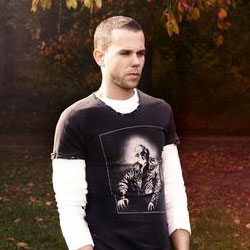 When the pint-sized Antibean and the rest of the band that M83 now is appear there is much chatter in French and in English, the tour manager and band members discussing hotel rooms, equipment and soundcheck times. Anthony, tanned and toned, is quiet throughout.

Eventually he disengages, ambles over and suggests we start our interview. His luggage is still in the lobby and he’s yet to see his room.

The new album Saturdays=Youth is as good a place to start as any, so we start with why it’s called what it is. In fluent English with a charmingly French accent, he explains.

“My main aim with this album was to recreate my teenage years, the feeling of being a teenager,” he says, looking rather teenage still. “The title is the main theme of the album because Saturdays were the most important days for me when I was a teenager, I think. I have many good memories about these days.”

Were all the good memories confined merely to Saturdays? “I didn’t really like Sundays when I was a kid. It’s a family day, and Monday is a school day again. Saturday is at the start of the weekend and you can go and party and ‘ang out with your friends. It’s the day when I ‘ad a lot of good experiences with my friends. We used to rehearse with my band on Saturdays. We used to make parties on Saturdays.” He pauses. “We used to take drugs on Saturdays,” he giggles, self-consciously.

So M83 is a nostalgic look back at a life past, a world gone? “This album is full of nostalgia. I always think the past is better than the present. And I always live in the past. It makes me feel happy.”

Most electronic artists would look to the future; does his preoccupation with the past make his M83 project unique? “Oh I’m not unique,” he says. “My music is just a mix of all my influences. It’s not new. It’s a combination of sounds. I used to listen to a lot of psychedelic music and electronic German music from the ’70s. I’m still a lot into it actually. Can, Kraftwerk… I’m a big fan also of Brian Eno.”

We get on to talking about Eno’s contribution to Coldplay‘s latest effort. Anthony hasn’t heard it, but says their last album X&Y was “really good”. I put it to him that Can and Coldplay are fairly divergent as influences go. “My taste in music is very eclectic; I can listen to a lot of different types. But the best music for me is ambient. I really can listen to this for 24 hours.”

His preoccupation with things past extends to his instruments. “We only used analogue keyboards from the ’70s and ’80s – we didn’t use any computers (apart from the recording). And old guitars from the ’80s.” All of this he finds, like fellow analogue freak James Murphy, online – he’s an avid eBay user. “I’ve got quite a good collection of keyboards and guitars.” What was his best buy? “I bought one keyboard, an old Italian brand I think. I only use one sound, but this sound is just perfect. I really like to have the contact with the gear and the keys. It’s very important for me.”

His tactile approach to his tools is explained as his way of expressing himself. “I think making music is a way for me to express my feelings, to leave something. It’s important for me, because I’m quite shy and it’s difficult for me to communicate. I can express my feelings in my songs. It’s the best way I find to do it.”

On stage he can seem shy, facing band mate Morgan Kibby instead of the audience for the most part. At the moment he’s communicating just fine, but he’s not through with knocking himself just yet. “I’m a really bad musician,” he continues, “so it’s really difficult for me to write a melody in my head.” How does he get round this problemette? “I always start with finding melodies on my keyboards or my guitar. I just start with one sound and then I just make up 20 or so sounds. It’s really not complicated. Sometimes it just doesn’t work, and sometimes I don’t know why it’s working.”

It’s the medium’s experimental potential that ultimately attracts him to it. “There are a lot of things you can do in music. You can try new things and experiment. I’d like to work on movie soundtracks, to do different kinds of music.” His first soundtrack experience is already completed, though the film in question has yet to go on general release.

And anyway he says “Music is not really a priority for me in life. I like to do plenty of things.” Oh? “It’s certainly one the big things in my life, but I like to do other things, not music seven days a week. I like to have some rest – I’m quite lazy. I don’t like to work a lot.”

What are these other things he likes doing? “I like to spend time with my friends and family, doing sports, playing videogames, watching movies, reading. Sometimes when I’m working too much I’m getting bored. I like to do music, but I like to do something else as well.”

He’s long been big on stargazing, for instance. “I’ve always been fascinated by space, stars and science fiction. The name M83 is the name of a galaxy,” he reminds me. Andromeda was taken, it seems. “When I’m composing music I always have images in my head. It ‘elps me a lot to compose.”

“I’m not doing music because I want to earn a lot of money. I do it because I feel it.”
– Anthony Gonzalez

Fortunately he lives in a place where light pollution doesn’t disrupt his perfect view of heavenly bodies. “I live in the south of France and it’s quite a beautiful place. What I like to do during the summer nights is lay down and listen to music while watching the stars.” He gazes over my head. “I like to do this a lot.”

His lifestyle allows him such pleasures. “I do what I want to do. If I don’t want to work, I don’t work. I do not spend a lot of time on MySpace. I used to at the begining but I quit.” So when he’s not playing gigs, and the stars aren’t out, what would he be doing? “I will be at the beach,” he says, flashing a smile.

His Mute stablemates include Nick Cave, Depeche Mode and Goldfrapp, all of whom have stayed with the former indie after it was bought by EMI. “It’s still a small label and they’re very passionate,” he enthuses. “I really like working with them; they’re very clever people. But EMI is like a big industry and I’m working with new people every six months. There is no relationship. They always change the bosses. I don’t know what’s going on in EMI.”

Indeed he’s one of many artists with a keen eye trained on happenings across the music business at the moment. “It’s getting more and more difficult because of the music business situation,” he sighs. “I just have one album left – it’s nearly the end for me. It’s worth it maybe to try something new. Why not maybe try to do my own business? It’s difficult but very exciting at the same time. It’s always good to have a good label, like EMI, but if they don’t have the money…” So is he getting less money for this album than for his previous efforts? “Oh yes,” he says emphatically.

“But I’m not doing music because I want to earn a lot of money. I do it because I feel it. I will do music until the end of my life.”

M83’s album Saturdays=Youth is out now through Mute.