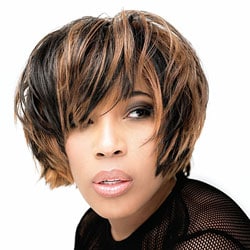 Sitting in a couch and resting her feet on a zebra-print rug, Macy Gray’s head-to-toe pink adds a bit of color to the safari-themed suite at Hollywood’s famed Roosevelt Hotel.

The singer with the infamous duck-like voice is finally releasing her much-awaited album, and as the title indicates, it’s set to be Big with a capital B. “It’s a totally fearless album,” says Macy, “It’s braveness is its strength.” And apparently it’s named after “Will’s big ole butt!” she jokes about her friend and producer, the Black Eyed Peas’ Will.I.Am.

“He is a very innovative, really creative person, really broadminded,” gushes Gray, who spent much of last year perfecting this album and learning how to get that big sound from Will. “He’ll produce a record and the next one he does is totally different, you know? At the same, though, he’s very smart, very visionary. He’s not just thinking about your record; he’s thinking about the album, how it’s going to be perceived and how it’s going to relate to the world. So I learned that from him. He’s always looking for the big picture.” And so is she.

Once notoriously picky, Macy is now more relaxed. “I feel differently about some things and I’m definitely more open. I used to be really possessive about my lyrics and who I worked with and who I let come in the studio. I’m just more open to doing new stuff, and I think that is what kind of shaped the album.”

As did the guests. Will brought among his fellow Pea Fergie and rapper Nas, while Natalie Cole made Macy’s day. “She is an idol of mine. I asked her if she’d be on my record and she said yes. I was so honored.” Then there’s Justin Timberlake. “Justin told Will that he had some songs for me, and we went into the studio together and did two songs, Get Out and Okay.” The result is an eclectic mix reflecting her turntable. Besides listening to her own album “quite a lot. I’m obsessed!”, she’s also “a huge Prince fan, and I like Madonna, Bob Marley, old rock ‘n roll like The Doors and Led Zeppelin, I like a lot of jazz. All the things I’d rather listen to are older records.” And as she says, “You have to be a student of your craft. You have to know what came before you and what’s around you.”

That may be one of the reasons for her founding of the Macy Gray Academy of Music in the NoHo Arts District in North Hollywood, giving kids a chance at bringing out their artistic talents. “It’s actually for self-expression. It’s just as much theory and technique and instruments, but it’s also more about giving kids an opportunity. They do a lot writing there, so they already make their own records. They also form little bands and have their own websites. So it’s more like cultivating this place where you can go express yourself and be a part of something and learn more about yourself.” As for her own three children, she had once allowed them to draw graffiti on a wall, “but I had to put a stop to it when they started spray-painting in the closets!”

So they resorted to listening to her music instead, right? “They love my stuff! They’re always singing it. They’re a big inspiration of mine.” We get a glimpse of Macy the mom in Wut I Gotta Do. She explains: “I know motherhood changes everything. You see things differently and you handle your relationships differently, ’cause now you’re not just looking for a man, but you’re looking for a man who likes your kids and who your kids love. Your relationships are different and you do a lot of things for different reasons. And when you’re an artist, you kind of reflect the life you’re living. If affects your life so deeply that it would have to effect your art and even what you have to say.”

Besides music and acting – “I’ve done three movies in the last three years” – Macy is also experimenting with other channels of expression. The singer has created a fashion line due out in fall. “It’s called Humps. It’s actually for voluptuous, curvaceous girls girls with thighs and hips. Especially here in LA, it’s hard to find clothes that do big sizes. We created this line so that these billions of women can have great clothes that fit them and that are still affordable, too.” The line reflects her multi-hued personality. “It’s real, real colorful and graphic-driven – everyday streetwear, really comfortable, casual great stuff.” So where does she go shopping? “I like H&M! They’re my favorite. I’m not a big designer person. I like simple, classic shit like Calvin Klein and DKNY. I love DKNY. I know there are a lot of new designers, but I’m not really into them.”

“All the things I’d rather listen to are older records.”
– Macy Gray

Macy is hardly big. In fact, she looks great. She does however feel the pressure many women in their 30’s face today. “I think ageism is the worst. People ask me about the racism in our industry and the sexism, but I think the worst rodent out of them is ageism because once you get to a certain age, you actually get ‘smaller’, as far as I’ve seen, especially in the movie business, and definitely in music. You’re almost penalized for surviving in our society, you know what I mean?” Yeah, it reminds me of Logan’s Run. She laughs: “I know, it’s crazy! But I think you just have to be smart and be able to create opportunities for yourself. You have to set yourself up, that’s all.” Like she continues to do.

Sometime in the future, she would like to work with the late Bob Marley, “but that might not happen!” she laughs. “I love his son, Damien Marley, and I actually talked to him about working together. Maybe Sean Lennon one day.” For now, Will.I.Am is her main man. “Out of everyone, he knows me very well. He seems to have a really great perspective on me and what I needed to do at this point in my career. So we’re pretty tight.” Will agrees: “I’ve always liked working with Macy.” Their collaboration began when they wrote a song for the Black Eyed Peas. “I kept it for me. It’s called ‘Will.I.Am is so sexy’!” jokes Macy. The tracks on Big are her most thought-provoking yet. “It’s a totally fearless album. Its braveness is its strength,” the singer says. Will is more explicative. “It’s a woman power record, but in a cool way. I would buy it for my girl.”