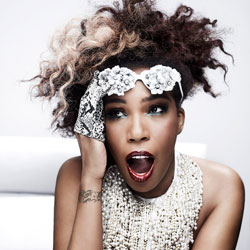 Macy Gray is in town – and seems determined to fill every minute of every hour she spends in London. When we catch up with her briefly at the hotel room where she has set up camp for the week, she is in the process of recovering from the previous night’s Leicester Square gig, preparing for a front page photo shoot to promote her fashion line, and considering what might be on the DJ set that night for a private party.

It’s all in a day’s work, of course – but she’s being well fed, judging by the scraps of a gargantuan English breakfast that sit on the table. As a dozen or so lighting and props people ready the bedroom area for the photo session, Macy herself sits on a white sofa, looking every inch the pop star. With electric hair flying out in all directions, and some seriously big sunglasses, it’s difficult to tell exactly how tired she is. We don’t see her eyes for the duration of the interview.

Things get off to a shaky start. Her show the previous night was ‘great’, nothing more, while her new album The Sellout is “definitely really pure and honest and all those things”. Apparently this one’s for herself, rather than other people. She frowns. “I read that somewhere, but I never said that. It’s actually something I think everyone can relate to and connect with. But I don’t make albums just for myself. I could never do this all for myself – that would be insane!”

Does that mean she is aiming her music at anybody who wants to listen? “I think it’s aimed at grown-ups, really. It’s about love and kids and a career, and a lot of Still Hearts is about the residue of a relationship. There are a lot of things in it that you can listen to and say, ‘I’ve been through that, I know exactly what she’s talking about’.”

“There are a lot of things in it that you can listen to and say, ‘I’ve been through that, I know exactly what she’s talking about'”
– Macy Gray aims her latest album at human life and its everyday experiences

Being a mother of three, Macy has had plenty of those experiences, and readily admits her children are useful source material for her songs. “Kids really change your whole life. They have a massive effect on your love life, you know, and so that’s your inspiration, that’s where your stories come from and makes what you sing really different.” They are an increasingly useful sounding board, too. “They hear things at all the different stages of writing, so by the time the record comes out they’re totally sick of it. But they actually like my stuff and always give me really good advice.”

With her new album Macy took the step up to an executive producer role, but insists, “I didn’t do it alone. The album itself I did on my own, but I had a lot of help creatively with the production process. Saying that though I’ve always had a good sense of what I like, and what I can sing too.” This time she agrees to going for a more natural sound, in songs such as Beauty And The World. This time her smile of acknowledgement has more warmth. “That’s really cool, and that was a fun night when we did that.”

And what of Kissed It, her collaboration with Velvet Revolver? “I’ve known all those guys for a while. Duff lives around the corner from me, and I’ve known Slash for a really long time, and I know Matt because we play in this band in LA called Camp Freddy, so I was really happy when they agreed to do it, and really flattered. It’s interesting, because that song was originally a hip hop track, and we had a little loop from the keyboard going through, like a synth dance song or something. Then the guys played on it and it turned into this glam rock song, so it evolved differently to how it turned out. When I first had the idea for the song, it was very like it could have been something you would hear in a club.”

Now she’s warmed up a bit, Macy admits to taking a bit of time before deciding what to do with this album. “I had to, because I came to a point in my career where I decided this is really what I want to do for the rest of my life, and I had to think about how I was going to do that. I had a million ideas and a million doubts, and then it just got to be natural, just doing it, and this album was a result of that. I know there’s a lot of artists that plan out every move, and plan what they’re going to do and how they’re going to do it, but that just didn’t work for me because I couldn’t make a decision. So I just wrote to see what came out, and that’s what came out!”

She admits to “getting ideas in my head all the time”, and her recent sideline as a DJ seems to be taking up much more time in her schedule. “I play classic stuff that everybody knows, all kinds of different genres. It’s fun! My ex-boyfriend taught me and I doodled around with it, but as of late I’ve been obsessed with it and have to go to the computer and practise it, get my sets together. It’s very weird, but a lot of fun.” Is she tempted to do a compilation? She nods. “I definitely want to do a mix tape, something like that.”

With DJing a vehicle for showing influences, the next question is perhaps inevitable. So which soul singers does she admire? After a long and somewhat weary silence, she responds. “Tons. The obvious ones are from back in the day – Aretha Franklin, Stevie Wonder, and all that, but I don’t know really.” She yawns, then decides after a prolonged silence, “I think that I’m probably my favourite soul singer at the moment.”

Another awkward silence ensues. Clearly she isn’t short of self belief – but when the question switches to the possibly detrimental effects of auto-tune, she agrees she wouldn’t need it – but doesn’t think it’s as big a monster as people are making out. “You know what, auto-tune’s been around for years, but it’s only if you crank it up that you get that exaggerated effect. It’s on a lot of records, and it’s not this horrible thing people make it out to be. I think it’s cool, it’s got overused but if you do it right it’s really cool.”

Has she learned a lot in the studio this time round? “I think I’m better at just directing, getting the song to the point where I know I can sing to it. I’m really good at making records, and I could probably make records for other people, but it’s more of a sense of knowing what I want and what’s best for my voice.” And what a distinctive voice it is – as she readily admits with a laugh. Time’s up though – and it’s on to the photo shoot, glasses still intact. An interview that has been distinctly frosty around the edges is over – and still the singer’s eyes remain hidden.

Macy Gray’s new album The Sellout is out now through Island, featuring the recent single Beauty In The World. For daily updates on her life and events head to the Gray Life section of macygray.com.