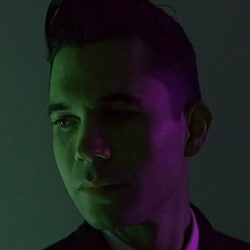 In a phone conversation, Matthew Dear’s most immediately striking feature is his voice. That may sound like an incredibly empty observation to make – since we have nothing else to go on initially – but the sonority and richness of his baritone is uncommon. He sounds relaxed, and an easy air permeates our conversation, which takes in his acclaimed new album Beams but also some changing personal circumstances that could have far reaching effects on his future career.

For now, though, it’s all about Beams – recipient of the maximum five stars in a musicOMH album review, which Dear is pleased to hear about. With its increased vocal content, does he regard it as his most personal album so far? “Absolutely. It’s got to be, with what I’ve put in to it, and that’s all I can say. It reflects what I’ve done in the studio, and also the confidence that I’ve got in my machines. Lyrically it’s more personal, and I find that it is a blend of anonymous and experimentation.”

A lot has been made about how Dear has now gone ‘pop’ – or more accurately has embraced the use of melodies and hooks that could be seen as more popular. “I love pop music,” he says with a smile now evident in his tone. “I think Kraftwerk is pop music, although I’m not saying I listen to that kind of music all the time. There is a certain comfort in pop melody. I try to reach for pop gratification in my own little weird way, but I would say that Beams is full of happy accidents, those sort of things that happen in the studio when you’re trying things out and not always knowing which way they’re going to go.”

Another of the album’s striking features is a new-found warmth. “Her Fantasy is a good example,” he confirms. “The main hook is from a Korg PolySix, where I was using an arpeggiator. There are a whole load of sounds in that track, and for me Her Fantasy definitely represents the crescendo of the album, the equipment, the vocal style. It’s warm and shiny music.”

Is that new-found warmth a result of a change in personal circumstances? “Not really,” he says a little enigmatically, “it’s more about acquiring the synthesizers that make these sounds. I’ve always tried to push myself back towards guitar, bass guitar and drums but at the same time I’m not throwing the synthesized stuff out the window.” Is it a sexual album? He pauses. “I think so. But then every album is a bit sexual. It’s very emotional. It always has an element of sex there, themes of love, jilted love; romance, pictures of my life and love. That’s a good call; I think it is very sexual.”

Dear continues to grow as a vocalist, to the point where he can now pronounce himself comfortable as a front man and lead vocalist. “It’s getting a bit more present. There are a couple of moments on Beams that capture the tone of my voice, low to get presence without overpowering. I like the live feel to the voice.” There is a hint of Dave Gahan there too. “That’s good,” he notes, “because I love Dave Gahan. I have my own range though, a bit higher than him. It’s not a broad range but it’s about utilising the tone.”

Lyrically there are some double edges to talk about – and perhaps nowhere more so than the words in lead single Her Fantasy, where Dear asks, “Am I one heartbeat away from receiving a damaging shock to my life?” Is that a thought that often passes through his mind? “Yeah, it is. What happens is that when I write a song, the music comes first. The melody presents itself whether I’m humming or trying different phrasing. With the way I record, and the set up I have, it’s just you and your machines often for hours on end, alone with yourself. It’s a good time for revelling in the broad questions of life – such as death, and a lack of permanence. It’s not what I sit around and think about all the time, but that’s what came out on this occasion. These songs are fleeting moments from that environment that are chained to each other. It’s like saying, ‘Will tomorrow be done with everything, and what are the consequences?’ I want you to hear that song; I want the listener to feel that’s their question.”

Does he find he cares less about how other people interact with his music now? “No, I think it’s going backwards! In the beginning I think it was so out there, I didn’t care at all when I was making albums, and that comes through in the ASA Breed record and the album before that, Backstroke. Now I think they’re more personal, but I want them to be personal for everybody. I’m not asking questions apart from those that everybody else might ask.”

“I’m not a brooding, nose to the floor person in a sullen state. Different triggers happen for me, so why not harness them in music?” – Matthew Dear

What is not in dispute is the concentration of emotion Dear now uses. “Yeah, definitely,” he agrees. “It’s a positive drain, but it’s the best way to get everything out. With structures I might not always understand what’s coming out until years later, but the vocabulary of music is there’s no right or wrong answer. It is what it is, and that’s freedom.” Might there eventually be a danger of him revealing more of his personality than he wants to? “Yeah. It’s maybe something I will have to start contending with. If I am more honest, and if my questions are important, the full answers aren’t always the way to go.”

He qualifies himself. “They’re moments. I don’t sit here and dwell, it’s when I make music that I think that way. I’m not a brooding, nose to the floor person in a sullen state. Different triggers happen for me, so why not harness them in music? I’m a very mellow-hyperactive person, if that makes sense. I’m a cat-nap sort of person; I sleep for five or so hours a night. The music comes in to the head no matter what. I find it’s the creative side and the mechanical side. Many people I know are extremely gifted but cannot turn it in to something. Others are extremely technical but not so gifted on their creative side. You have to have both, to know when to turn off the initial idea and know when to turn it in to a track.” Does he find any outside stimulants help? “In that sense, a good coffee or something like that helps me get from the creative to the doing. So I really like a good roasted bean.”

As well as Beams – not Beans – Dear has recently worked briefly with John Foxx on the track Talk (Beneath Your Dreams), set to be part of Foxx’s forthcoming Evidence long player. “It was great,” he reflects, “a really simple kind of process. I hadn’t thought of that possibility, us working together. It was one of those moments where there was a really nice modular loop and his vocals. I heard it and thought it was almost done, so all I did was add some rhythmic elements and a ‘call and response’ feel. The song was written about being the figment of someone’s imagination while they were sleeping, and I wanted to be the person doing the sleeping.”

Dear continues to oversee Ghostly International, the label carrying his music but also providing a platform for new talent. “It looks good right now,” he says affirmatively, “with Com Truse, Gold Panda, and some new talent from Brooklyn.”

Dear’s music is indelibly linked to his home city of New York, but that situation is on the point of change. “I’ve just brought a house in the woods,” he says in a voice that suggests it was a big decision to make. “BC & Beams were made on the New York experience, and Beams was the comedown. I’m not saying I’ll never live in the city again but that stimulus was something that chewed you up and spat you out. Tricks, shortcuts, learn when to sit at home and take a night off.”

If Dear’s previous music was made in response to his surroundings, what might he make now he’s out in the woods? “The next one’s gonna be all bluegrass and banjos!” he laughs. “The space and elements will totally change, which is both exciting and a bit scary. The place is in upstate New York, and at the moment I have people working on my house. That means I have eight people I see every day, whereas in Brooklyn I would see 80 people just walking to the subway to get the train. What is that change to interaction going to do, the changing in the state of the city? It will be my new creative base, and there won’t be any people there really – although I do have some deer and rabbits for company.”

Matthew Dear’s Beams is out on 27 August 2012 through Ghostly International. Further information on his schedule and work with Ghostly can be found here.