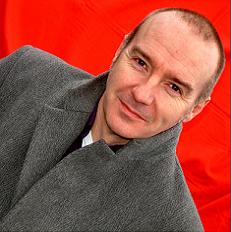 Midge Ure has had about a dozen careers in one. Frontman of chart-topping ’70s popsters Slik; fill-in guitarist for the legendary Thin Lizzy; brains behind new romantics Visage; driving force behind Ultravox; successful solo artist – and that’s just for starters.

He directed videos for Bananarama, is musical director for The Prince’s Trust concerts and, most famously of all, instigated the Band Aid and Live Aid projects with Bob Geldof.With a new autobiography in tow, Live Aid released on DVD for the first time and a new version of Do They Know It’s Christmas? on the shelves, musicOMH thought it would be a good time to catch up with the affable Scot.”I’ve been so incredibly fortunate. I can’t put this success down to talent. You know there is an element of talent there, just like millions and millions of other musicians have, but it’s just luck that decides whether you play in a pub round the corner or you play in Wembley Stadium.”

Fortunate? Element of talent? Luck? Such statements are not exactly from the Oasis or Razorlight schools of arrogance, even though Midge Ure has achieved a tad more than most musicians even dare to allow themselves to dream about.

Nevertheless, Ure – real first name James, which got shortened to Jim, reversed to Mij and then evolved to Midge – is happy to put his career down to a series of happy accidents.

“When Slik – my first band – finished with an ugly end, I was incredibly fortunate to have Glen Matlock from The Sex Pistols phone me up and ask me to join his new band. I had nothing to do with that – a Melody Maker journalist said to him, ‘I’ve seen this guy. He should be your frontman.’ It was really nothing to do with me. I didn’t instigate it, I didn’t work my way towards it. But once I was in London, the same things were repeated – I fell into situations and found myself in amazing scenarios where I came off as the incredibly fortunate one.”

“I can’t put this success down to talent… It’s just luck that decides whether you play in a pub round the corner or you play in Wembley Stadium.” – Midge Ure does not appear to have graduated from the Oasis school of arrogance.

Like joining Ultravox, just before they hit the big-time? Ure is keener to admit that luck played less of a part in that one:

“When I joined Ultravox, they had just lost their singer and their guitarist, they had been dropped by the record company, they had no management and they owed a fortune. We had to scrape money together just to get into a rehearsal room to make a noise. But the moment we plugged in, the noise we made was huge and something like I’d never heard before in my life – I absolutely loved it!

He wasn’t the only one, for in the space of just six years, Ultravox had seven Top 10 albums in the UK. They will be most remembered, however, not for an album, but for the classic synth-pop single Vienna, which was famously kept off the top of the charts by Joe Dolce‘s novelty song Shaddap You Face. I ask Ure if this still grates.

“No. People tend to forget that John Lennon was shot at the same time and Imagine (and Woman) went to Number One as well… It was such a bizarre scenario where you went from the sublime to the ridiculous and both kept us off (Number One)… But the fact that Vienna stayed where it did for such a long time and it outsold both records – it elevated the band from cult status, playing the college unions, up to where we could play Crystal Palace or Wembley, which was great.”

“No. People tend to forget that John Lennon was shot at the same time and Imagine went to Number One as well.” – Midge Ure on whether Vienna being kept off the UK Number One slot by Joe Dolce’s Shaddap You Face still rankles.

Of course, it was towards the end of Ure’s Ultravox stint that his career-defining projects – Band Aid and Live Aid – took place. Ure is understandably proud of the world-changing effect of that work and provides a sobering riposte to curmudgeonly critics of the re-recorded Do They Know It’s Christmas? single.

“I recently came back from Ethiopia. I was invited by Save The Children – Save the Children is one of the biggest agencies working in Ethiopia and have been consistently there over the period, and therefore are big recipients of Band Aid money.”

“The famine that kicked in last year – twice as many people as there were in 1984 had to be given help but because of things like Band Aid, the infrastructure was there. With the early warning systems, it didn’t turn into the hideous famine that we saw on our TVs and what led to Band Aid and Live Aid.”

“The ongoing legacy from Band Aid and Live Aid is that I think young peoples’ perceptions of charity work has completely changed. You know back in 1984 or 1985, charity was something that the Womens’ Institute did – that was the perception – and all of a sudden it changed and it was kind of cool to be caring… People are alive today who wouldn’t have been alive had people not stuck their hands in their pockets and bought that record.

“People are alive today who wouldn’t have been alive had people not stuck their hands in their pockets and bought that record.” – Midge Ure on why re-recording Do They Know It’s Christmas? is anything but a waste of time.

All of which begs one final question. Given the profound philanthropic spirit that imbued Band Aid and Live Aid, how come it was only Bob Geldof who got given a knighthood? “Sir” Midge laughs (‘Sir Midge is a dreadful, dreadful combination!’) before responding somewhat surprisingly:

“I think Bob’s token knighthood was a slap in the face.”

“Yeah, I think it was dreadful of the British Government to give him something that he can’t use (Bob cannot use the term ‘Sir’ because he is not from a Commonwealth country). I think he thought he got it because he was spearheading the entire thing; he was the guy passionate about it, screaming down the cameras, accosting Margaret Thatcher, telling the UN they needed an enema… But what he got, I reckon was for all of us – so we all got a knighthood we couldn’t use.”

That may be so, but a few million starving people had their lives changed for the better. What’s in a name anyway, eh ‘Midge’?

This interview was originally published in 2004. More on Midge Ure at his website: midgeure.com