Midlake: “Blake or Goethe, it’s nature in every line, the seasons, the months, the flowers” – Interview 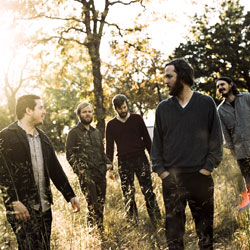 Midlake‘s front man Tim Smith is sat crumpled on a rickety chair amidst the bookcases and pianos on the upper floor of the beautiful Wilton’s Music Hall.

He seems tired but personable, constantly scratching his head or beard during the pauses between sentences that can sometimes peter out mid-flow.

On the eve of the release of his band’s third album The Courage Of Others, the flautist and singer is contemplating what it is he likes about making music and being in a band.

“The best moment is right after you’ve written something you’re pretty sure is going to sound really nice on an album and you lay it down on a 4-track and you listen to it over and over and, at that moment, you can feel how someone outside of Midlake sees Midlake. Only at that moment.”

It’s a beautiful sentiment, this idea that a moment of pure joy can exist when a spark of creativity hits. Unfortunately, it’s only fleeting. “Then once a week has gone by, or even the next day, or two weeks it means nothing to you or it takes on some kind of different guise. You never hear it the same way again and you can never hear something as other people hear us.”

This notion of handing over the songs to the public has taken on a sense of higher importance given the critical success of Midlake’s last album, The Trials of Van Occupanther. Steeped in ’70s American rock, it’s an album that’s held up as a classic of its genre. Yet, few who had heard its patchy predecessor, Bamnan And Slivercork, could have hoped for the success that followed.

Given the fact that Smith’s instrument of choice during his college years in Denton, Texas was the decidedly un-Midlake saxophone, it’s something of a blessing that things didn’t turn out differently. “I planned to go back to where I was from, eventually, but I stuck around Denton for a couple more months, I guess, and ran into the guys,” he says. “They said to come over and jam with them. They were playing this jazz-funk stuff and I didn’t have a clue.”

Smith’s musical background had, up until that point, been limited to old jazz records. Not for him the rock heritage of his band mates, who set about educating him. “I didn’t know who Led Zeppelin was, I didn’t know who Pink Floyd was. I’d heard some of The Beatles. I had heard OK Computer in my last semester of college, someone had played it for me and I thought it was kind of amazing; like, oh, maybe this rock thing isn’t so bad.”

Having had his musical horizons broadened, Smith began to absorb his new obsessions and channel their sound into Midlake. An obsession with Radiohead (“Best band in the world, and dare anyone say they’re not!” – see if you can’t spot Exit Music (From A Film) in the new album’s Bring Down and The Horn) has resulted in numerous comparisons, not least because of the vocal similarities between Smith and Thom Yorke, whilst hearing Bjrk‘s Homogenic album was another lightning bolt that made Smith realise there was more out there than Charlie “Bird” Parker and John Coltrane.

“I’m not addicted to it. It doesn’t mean much at all to me, to get on stage.”
– Midlake’s Tim Smith

“So the first album I was aware of Radiohead, Björk; we were into The Flaming Lips and Grandaddy, and the album sounds like a kind of Flaming Lips/Grandaddy kind of lo-fi type of thing, but at that time I hadn’t heard Neil Young, I hadn’t heard Joni Mitchell, I hadn’t heard America really. I might have known who they were, but I didn’t listen to that stuff, or Fleetwood Mac. So, once I started hearing that and then collecting a lot of that ’70s music for a dollar a vinyl and started checking all that stuff, I was like, ‘oh wow’. And that was Van Occupanther.”

Full of driving melodies and analogue keyboard throwbacks, Van Occupanther was a quantum leap on from their debut, with rock-solid melodies in Roscoe, Young Bride and Head Home in particular presenting a confident band comfortable in their sound. It’s also a concept album, charting the story of a lonely scientist, but for those waiting with baited breath to discover who this character is or where he came from, you may want to look away now. “We used to play a game where we would greet each other and just handshake one another in the band, and we’d come up with some silly name trying to make the other person laugh,” he says. “It’s so ridiculous, as if you’re meeting for the first time. So, it’s always been in the band, really early on, maybe for about eight years or something like that, so we always knew that we would like to use that as an album title. Then it was just a matter of who is this Van Occupanther.”

It’s heartwarming to hear Smith laugh at the idea of the concept being some grand idea or plan. Rather, much of what makes Midlake such a great band seems to stem from a very natural progression from one point to another. Nothing is studied or over-thought, things just tend to progress at a pace they control. So, when it came time to record the follow-up, things faltered when the band tried to rush. Early sessions were scrapped.

Things were further complicated by Smith beginning to listen to a brand new stash of old vinyl, this time taking inspiration from a particularly English brand of folk. As he explains, “When you start to listen to the British folk thing, there’s a difference in guitar playing. If you come from Lindsey Buckingham and then all of sudden we want to get away from that and go more to John Renborn, it’s going to take some time to figure out how you do that. It’s a change of direction and, if you’ve written a song more in the vein of Fleetwood Mac, it might work great for that if that’s what you want to do, but if you’re trying to get to a more Medieval type of thing and you’re placing that style on top of a song you wrote in the style of Fleetwood Mac it’s not… It’s a little tougher, I guess.”

In the past it had been Smith’s bandmates who had most influenced Midlake’s sound. On this occasion Smith arrived at the studio laden with new source material for the others to digest. “I eventually made a playlist with everything, just really trying to hit them over the head with it eventually, because I didn’t know if we were getting it. I really wanted this and they were, not reluctant, but it was taking a while for them to really understand how important this was to me. I think once that happened, once they got the play lists and started checking out these bands, they started to fall in love with it as well.”

In order to guarantee work would continue steadily on the new album, the band would record in shifts, as if at work. Mornings started at 8am and the day finished at 5pm, although the morning start was shifted back to 9am over time. When asked if this makes being in the band more like a job, Smith is refreshingly honest. “Um, a lot of the time it feels like a job. I don’t even really like the process of recording. I just want to get to the outcome, I just want to have a nice sounding album.” This is followed with the kind of soundbyte a certain Thom Yorke would be proud of. “So a lot of it, you do ask yourself, ‘Why? Why do I do this?’ If I don’t like the process of recording, I don’t like touring, if I was never on stage again it wouldn’t matter to me, I’m not addicted to it. It doesn’t mean much at all to me, to get on stage.”

“If you come from Lindsey Buckingham and then all of sudden we want to get away from that and go more to John Renborn, it’s going to take some time to figure out how you do that.” – Midlake’s Tim Smith

The irony of sitting backstage at a gig to launch a new album isn’t lost on Smith, who lets out a little giggle at the end of the sentence. Whatever his thoughts on the process of recording, the final result is an album that takes the template of English folk acts such as Fairport Convention and Steeleye Span and adds subtle layers of rich Americana. It also ditches the idea of a concept, creating a more personal record that reflects more of how Smith views the world.

Opener Acts Of Man, which incidentally was the first song written after the frustration of the ditched early sessions, seems to deal with man’s destruction of nature. Or perhaps it doesn’t. Smith himself is still not sure. “I never meant for it to be that way and I really wouldn’t be one to come across as an activist for the environment, I’m not really. It’s all fine, it’s not really me, I do my part by recycling. With Acts Of Man it was never meant to be man versus nature, it was meant to be more of man versus man. When I’m being interviewed and you mention those things, I’m like, yeah, maybe I guess I was talking about that, but in my head I was just thinking of the atrocities that man can pull on another man. That was more what I was thinking, rather than sticking up for the environment.”

So he’s no Al Gore, but the album is full of images of nature and the beauty of the natural world. For Smith, this goes back to his obvious love for the past and the slightly nave nostalgia that comes from collecting. “I think it has more to do with my like of older things and poetry, or classic works of art or classical music, or old architecture or old furniture. I always like something older,” Smith explains. “I think when I’m reading William Blake or Goethe, who I quoted in the album, it’s always nature in every line, they always talk about the seasons and the months and the flowers, and that stuff’s always in there. I don’t know what else to write about.”

Downstairs his band is rehearsing for the gig. Smith looks ready to take a nap. There’s just enough time to ask him about an album he and his bandmates have been working on with The Czars front man John Grant. Recorded during downtime whilst working on their own album, various members helped out as and when they were needed. It sounds, in relative contrast to the recording of The Courage Of Others, like a pretty fun time. “It’s nice to do someone else’s music,” Smith agrees. “It doesn’t mean as much, I guess. You’re being a little bit more creative, a little more free with the person, and, yeah, having a better time probably, laughing. But really you’re so tired, you’ve been recording for eight hours and you just want to go home and hang out with the wife and get out of there.”

Later, on stage, Smith and his band mates look suspiciously like they’re having a good time, treating a small crowd to a handful of new tracks. During one song Smith tilts his head back, closes his eyes tight and looks completely lost in the moment, seemingly enjoying hearing Midlake as only someone outside of Midlake can.

Midlake’s The Trials Of Van Occupanther is out now through Bella Union.