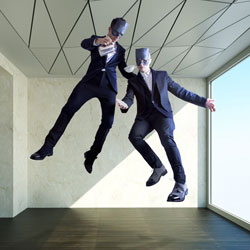 At the tail end of 2009 an enigmatically anonymous duo known as Monarchy began to make their presence felt on blogs with dark electronic music that married a perfect production sheen with confident pop songwriting sensibility.

The single Black, The Colour Of My Heart, put out through Neon Gold, is an addictive slice of pop perfection that calls to mind the intricacies of ABBA‘s The Day Before You Came, its black-and-white, sharp-suited atmospherics filing it alongside Hurts in a disco damaged corner of a room, its mascara tear-smudged and its tights torn, yet still striking a pose in the full knowledge that the world is watching.

Marina Diamandis was quick off the blocks to tip Monarchy for big things; when they signed to Mercury it looked like she was on the money. Fyfe Dangerfield and Ellie Goulding were among those quick to call in their production prowess for remixes. As the year progressed, Lady Gaga followed them; their remix of Dance In The Dark became the diva’s most downloaded remix to date.

With a smattering of showcase gigs, the duo expanded to a full band; momentum was beginning to build. They’d been unmasked as the duo behind Milke: DJ, label boss and producer Andrew and singer and lyricist Ra. They looked to be among 2011’s brightest pop prospects. And then the album release date was put back. And put back again.

Fast forward to 2011 and, after a difficult pregnancy, the eponymous album is finally emerging. A spot of coffee and baklava with the pair was evidently in order, to catch up on the twists and turns of their reign so far.

Both are dressed as though only this interview stands between them and the Lord Mayor’s Banquet, and prove to be convivial hosts. “You’re privileged to witness us without the masks,” ventures Andrew. “It did seem a bit ridiculous to turn up wearing them when we’re Facebook friends.”

Quite so. Monarchy’s cover was blown when Popjustice announced it to the world what seems like an eternity ago. So why the ongoing anonymity? “I guess it gives us some freedom from ego,” says Ra cryptically. “We have the ability to be more truthful wearing a mask because there’s no kind of fear. Similar to bank robbers, I guess.” “I think everyone to a degree creates something to distance themselves from their creative processes,” says Andrew. And to give Monarchy their due, Fever Ray‘s stopped at nothing in the masks department. There stands a lady ready-made for carnevale; even if we all know what Karin Dreijer Andersson looks like, her outlandish apparel is integral to her shows. And she’s far from alone. What’s different with Monarchy is that they’re men; this more than anything seems to have caused comment about the masks thing.

Andrew warms to his theme. “When we launched we had an image that was obscuring us, pretty much by accident. Everyone got intrigued by it. So we wondered how far we could take it. Once we started thinking about wearing masks and being anonymous we realised how free that makes us and how much it removes the ego, which is something we don’t like about being musicians; we’re not in it for self-gratification. We just want to make the music. So it was a snug fit. It was right to go down that path.”

“People know who Daft Punk are and they still put masks on. Same for Deadmau5. People even know who Banksy is now. But they still don’t appear. I quite like and respect that.”
– Andrew Monarchy

“There’s a difference between obscurity and being anonymous,” he adds. “People know who Daft Punk are and they still put masks on. Same for Deadmau5. People even know who Banksy is now. But they still don’t appear. I quite like and respect that. It would be very hard to be completely anonymous though.”

The pair were previously known as Milke. Why the name change? “We’re a product of our history,” explains Andrew, “but the image and the one song we launched with (Black, The Colour Of My Heart) had no relation to what we’d done. It was a new direction. We were well and truly on the way with Monarchy before the record company got involved.”

Ah yes, the record company. Mercury. Label of U2, Stereophonics, The Killers, Kanye West, Rihanna and Mariah Carey. How does an Australian electropop duo so far known principally amidst the denizens of Hoxton fit with all this entourage-toting, kitten-ordering, world-saving flummery? “Well, we have this space thing going on, and they’re called Mercury, and part of Universal… that was it, that was the reason!” giggles Andrew. “They’ve certainly let us hold the reins creatively,” says Ra, the straight man to Andrew’s funny guy. “We were pleasantly surprised. We are directly involved in the videos and the scripts and the artwork, with the same artwork guy we used before we were signed, so we’ve been given a lot of autonomy.”

Signing to a major necessarily altered the build-up to their album launch. “When Mercury said let’s do a single and then release the album, I was quite surprised. I thought that wasn’t enough lead-up, but said, well, they know best. So when they then said they wanted a bit more of a lead-up, it made sense to me. You can’t possibly get a decent following after one single. Once the album’s out, interest does start to wane and people ask what’s happening next. We just needed more time to develop what we’re doing live. Let it sink in, let people understand what we’re about.” Sadly their time with Mercury was short-lived; after the major’s A&R restructuring, Monarchy left to pursue alternative paths, though not before an eponymous album had been pressed and sent to journalists. It was, to say the least, unfortunate.

That they’ve bounced back from this is very much to their credit, and harnessing the marketing juggernaut that is Lady Gaga was no bad thing. “We did a remix for Kelis, and they’re on the same label. They asked us to do the Lady Gaga one, which came out before the Kelis one… It went on to be the most popular track on her remix album.” Has she been in touch? “No, not personally, which is a bit upsetting!” says Andrew. “I do like her creatively. There are so many fake artists out there, propped up… I guess some people think she’s the same, but she’s actually a real creative force and she’s very much in control of what she’s doing, what she wears and everything. She’s pushing the envelope a bit. She’s not just sitting around going, ‘I’m going to be a pop star’. She reckons it’s OK to have a nine-minute video and cover herself in blood on stage.”

The duo have dropped their other projects, such as Andrew’s label. “I think we both just saw that this was the vehicle to take us forward on every level, when you draw all of your experience together in your life to one focal point and really pursue that,” he says. “Stuff I’ve done in the past informs how I do remixes and production and how we perform… I can put everything I love about what I’ve done in the past into this project. And it’s not like I’m intending to play a dirty rave again.”

Indeed they’ve left dirty raves behind in favour of space. “It’s a platform that we can throw our songs on,” reasons Andrew. “Films like Solaris and Bladerunner, even Moon, they’re all set in the future and in space, but they’re all reflecting human nature and asking what it’s like to be human. We’re trying to do the same. All our songs are very personal, with the possible exception of Floating Cars. So we use space in the same way. And it fits in with the masks, the futurism and the sound. It has a spaceyness about it.” A chat ensues that ranges from Murcof (they haven’t heard of him) to Pink Floyd (they have), via The Orb (likewise). All rather cosmic.

Their lyrics come mostly from the mind of Ra, so the conversation turns to him to explain what’s behind that broody first single, Black, The Colour Of My Heart. “It’s an excuse for poor behaviour,” he says. “It’s asking for forgiveness for being who I am. I don’t know how else to explain it.” “It’s basically saying that you’re fallible. It’s saying you want to fall in love with someone but you can’t because you have a black heart,” chimes in Andrew. “Your human nature prohibits you from it,” rejoins Ra. A beautifully arranged apology? “Yeah.”

The anthemic Love Get Out Of My Way is rather more upbeat – something of a Duran Duran influence can be detected. “Maybe there’s something we’ve listened to that’s influenced us subconsciously,” shrugs Ra. Duran Duran are assuredly a pop band; are Monarchy? “I hate the phrase ‘pop music’ because it means something different to everybody,” Andrew sighs. “Some people think Katy Perry, some think The Killers. We’re not writing massively obscure tracks, but we like to put ourselves in the songwriting category; it’s not necessarily just straight-up kitschy pop.”

So what is pop, to him? Is Kylie Minogue – they’ve remixed her, too – the standard, bench-setting definition of pop? “She’s quite credible pop and has had a really long career. But I was thinking more like kitschy one-hit wonders; terrible music that still somehow squeezes on to radio. Like Cheryl Cole. I mean, her lyrics are awful. You put a million monkeys into a room with typewriters and eventually they’ll come up with Shakespeare, but you only need to put five monkeys in a room for five minutes to come up with Cheryl Cole. It’s just cliches. Every single verse. Ooh, there’s a cliche. Ooh, there’s another cliche!”

According to Andrew, Monarchy are most often lumped in with Hurts, Silver Columns, Midnight Juggernauts, Cut Copy and Presets. “It’s a moving feast who we get compared to,” he says. Both Silver Columns and Monarchy began 2010 being anonymous; the comparison was obvious. “Then they appeared in Wonderland in pants and white shirts and the obscurity was gone. I preferred them being obscured…”

But is there a worry, given that those acts have all released their albums and Monarchy’s isn’t out till much later on, that they might find they’ve missed the noirish electropop showboat and find themselves in a swamp of retro-tastic guitar bands whose images stretch to jeans and t-shirts?

“Guitars are back on December 9th, I’ve heard,” he giggles. “There’s going to be a new band who don’t give a shit about what they look like, and everyone’s going to hail them as the new Nirvana.”