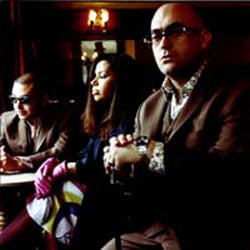 It’s all change for Morcheeba.

After making their name in the late ’90s with soulful singles such as The Sea, original singer Skye Edwards has left the band to go solo, leaving the band with a new sound and a new singer in Daisy Martey.

From the other end of the phone it sounds as if Paul Godfrey may have achieved a high level of domestic bliss. He’s just seen his daughter of two and a half off to nursery, accompanied by his wife, leaving him free to contemplate Morcheeba’s return from the wilderness, a period in which they’ve changed singers.

The new vocalist is Daisy Martey, formerly of the band Noonday Underground, and as well as marking a change in musical direction, she seems to be responsible for a new found enthusiasm in the original founders, Paul and his brother Ross. “We’ve already gigged a few times together and she’s fantastic on stage, very funny and charming”, gushes Paul. “Ross and I realised that Morcheeba was kind of our family company, and that we wanted very much to keep it going, hence the change.”

And what of the original singer Skye Edwards, whose rich vocals were such an integral part of the band’s success? “She’s just finished her solo record. In all truth we never imagined the three of us would be going that long – it just went on and on. I think now though that genre music like that has died a death, we took it as far as we possibly could”.

It almost sounds like a relief to Paul, but he denies that. “It was just a different time in our career. We still get on very well with Skye and we shared some great times together. Now, though, we’re back to writing prolifically – for the new album me and Ross sat and wrote 40 to 50 songs in a month, all in the same room!” Paul maintains a strong relationship with his brother, although “like all siblings we get on alright but upset each other now and then – we understand each other more than anyone.”

“For the new album, we sat down and wrote 40 or 50 songs.”
– The prolific Morcheeba on their recent period of creativity…

Get Paul talking on the subject of the new album and he rattles on with infectious enthusiasm. “I think it’s the closest we’ve ever come to capturing our real vision of how music can sound. With this record we didn’t need to worry about things like MIDI programming, which is a great asset in one sense as it helps to control the music, but in the other sense it doesn’t let it breathe as much. With this record we ended up with a style that incorporates English blues and folk, American rhythm and blues and groove, and even influences like Hendrix and Zeppelin. It’s got good, honest songs. There are so few good albums these days we wanted to craft one that’s good from beginning to end.”

Paul’s even been exploring classical music. “I’ve started to learn music theory, and went out the other day and bought about twenty CDs from the Naxos label – they’re so cheap and well put together.” He describes one of his first offerings, Debussy’s La Mer, as “inspiring, emotional and beautiful”.

Rather unexpectedly, Morcheeba turned out to be an extremely influential band in the 1990s, especially considering the length of time spent bubbling just under the surface with songs like Trigger Hippie and Tape Loop. Recalling their support from Radio One, Paul recounts how “they played decent records back then, it was the last generation where DJs weren’t egomaniacs with no personality. Now I much prefer the people on Radio Two, they concentrate much more on the artists and their music.” Does he think Morcheeba’s was a frequently imitated style? “Yeah, Big Calm pioneered a sound that people really enjoy, a different take on trip hop as it was then. It helped that we were off the back of other British bands like Massive Attack and Portishead, especially with us all being around Bristol.

“I prefer the people on Radio 2…they concentrate more on the artist and their music”
– Morcheeba bigs up Terry Wogan, Mark Radcliffe and company…

Paul lives on the south coast now, having moved away from the capital city he finds “too dirty and too greedy. Don’t get me wrong, I had some fantastic times in London and we made the most of the good times, worked hard and got hammered! Now I’ve got responsibilities and can’t do that so much!”

Paul compiled a Back To Mine compilation under the Morcheeba banner back in 2001, and when asked about his enjoyment of this makes an interesting point on how he feels the dance music world was “more open minded, a lot more so than the mainstream press for instance. In the mainstream they want to slot you into a category, but the drugs press chill out a lot more! They really liked us for some reason.”

He talks of Morcheeba’s continued ambition, and it seems forthcoming album The Antidote will mark the start of a new chapter for the band. With their energy and vitality rediscovered, it’s very much a second wind few would have predicted.