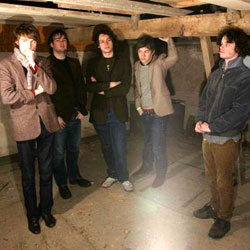 Let us introduce you to this year’s official Next Big Thing (according to the NME).

Taking the coveted opening slot on the NME Tour, and hailing from rock ‘n’ roll central – Bexhill-on-sea, since you ask – comes a band named after a Thundercats cartoon character. Chief villain, no less.

What was wrong with Schnarff? He was nice, if annoying. Mumm-Ra the Everling… well, he wasn’t so nice. Whatever, we’ll gloss over all that…
…what matters is the music, and it just so happens that it’s bloody good. The imminent release of soaring new single What Would Steve Do should see them reach new heights and build on the success of the tour.

“It’s going really well,” beams frontman James New, all youthful exuberance and floppy fringe. “It’s really good fun but we’ve been playing really good shows as well. The reception has been fantastic every night, I think we’ve gone down better than we could have hoped to.”

With The View, The Automatic and The Horrors also on the bill they’re in good company. “We usually share a dressing room as there’s never four free, so we know everyone well now.” So no rucks with the dreaded Farris Rotter then? “No, no, no. They’re all really nice chaps. They’re interesting characters, I get on with them pretty well. I’m sure there’s tensions elsewhere! No-one cares about the first band, though, they just let us do our thing and get off!”

The opening slot can be a mixed blessing. Kaiser Chiefs, Franz Ferdinand, Coldplay – the list of bands to have made it after opening is a who’s who of indie superstars. “To some extent this must be a coincidence, but it bodes well!”, says James. But a perennial problem has been the sparse audience, with most people usually still queueing to get in. “There has been an element of that, because we’re on at 7.15pm, and it usually starts semi-full. But by the end, I’ve been really amazed, it’s been fairly full crowds. We knew what we were getting ourselves into with this tour, and the risk of playing to half-full venues, but I think we’ve been perceived really well.”

Of course there are perks that go hand-in-hand with a sponsored tour of this magnitude. “This has been the least stressful tour in ages, because we’ve got a bus for the first time.” It’s a very flash bus, too, with leather seats, beds, the works. A step up from the toilet circuit, perhaps. “I don’t think it’s going to last, though! I think as soon as we go back to our own tour, it’s back in the van!”

New bands will always be compared to old or existing ones, but James doesn’t want to get drawn into this. “We try and steer away from the whole influences subject. We don’t like being pigeonholed, I don’t think we’re a very ‘current’ band. I know most bands say that but most bands are bullshitting. We really don’t.” Honest guv. With a burgeoning indie scene taking over all in its wake, it takes a brave man to distance himself from the gravy train. “I don’t know whether we do fit into the whole indie thing at the moment, but I suppose every band’s hope is that you’ve got something that’s gonna last the test of time, and that’s something we’ve tried to achieve. If we write something that sounds either current or like anything around at the moment, then we scrap it.

“I listened to our album the other day and thought ‘this is a really honest pop record'”. Ah, the ‘P’ word, something that tastes like shit on the tongue of the indie purist. Pop does mean popular though, and James is happy to admit that they’re aiming high: “Our ambition stretches to the end of the earth!”

Indie credibility and mass appeal is a tough balance to master, a fine line between being Radiohead or, say, The Kooks. James’s attitude to this is refreshingly honest, almost wilfully uncool in its wide-eyed enthusiasm: “Everyone wants both, but at the end of the day, if we wanted to write out and out shining pop, then we would. I don’t think we’ve quite done that. At the same time, of course we want commercial success, and anyone in our position who says otherwise is lying. We’re trying to reach out to people, the more the better – I mean, we’ve played to thousands on this tour, which is amazing. A smidgeon of cred is good, but bring on the fame and the money!”

The prospect of ‘the big time’ doesn’t faze him one bit – it’s what he’s in a band for, after all. “At the end of the day we’re not going to change as people. All we’ll get is a bigger bus and nicer food! As you get bigger as a band, you don’t really notice it, as touring’s such a whirlwind.”

Critical acclaim is important to the band, though, and James in particular – so much so that he doesn’t let himself read reviews of them anymore. “It’s more important to me than it should be really. I can get quite upset. I take things way too personally and memorise all the bad things that are said, and the people that say them!” The good has far outweighed the bad, though – hence the Next Big Thing tag. James shrugs off any notions of pressure attached to this with a typical confidence that betrays his innate belief in what he’s doing. “It’s exciting. We’ve done all the groundwork now. We’ve got a really great album that we’re all proud of, and we’ve honed our live sound. We put pressure on ourselves to do as well as we’re capable, but we don’t feel any outside pressure, ‘cos we’re a good band.”

The album’s already recorded, waiting for release in May, and ready to take the world by storm. “It’s a very big record, but not overproduced. It sounds silly, but it’s like a journey. It’s very diverse, with a kind of classic but modern sound. We’ve built something that’s quite unique, but at the same time quite commercial. Nothing’s throwaway and there’s no filler.” Big words indeed. Who could doubt him?